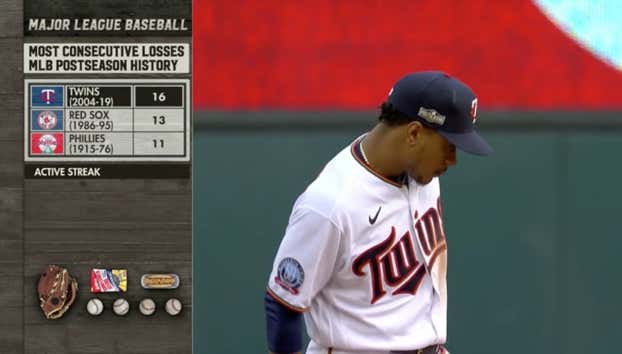 October 5, 2004. That is the date of the last postseason victory for the Minnesota Twins. Believe it or not it happened in old Yankee Stadium, which makes this all the more unfathomable because the Twins exist only to get stomped out by the Yankees in the first round of the playoffs. Even more peculiar is that the Yankees needed extra innings in two of the next three games to secure victories over the Twins, so it's not as if these weren't close games. The Twins put two on the board in the top of the eighth - again, in Yankee Stadium - to even force extras in Game 2. And then they took the lead in the 12th before blowing it in the bottom half of the inning. There was no way to know in 2004 that the Twins wouldn't win another playoff game until, well, who knows when the fuck they'll win another playoff game. Never? It certainly looks like never.

The 2004 Twins had Shannon Stewart, Torii Hunter and Jacque Jones patrolling the outfield. 25-year old Michael Cuddyer, 23-year old Justin Morneau, and 21-year old Joe Mauer all contributed to this team. That's a future batting champ and two future MVPs for those keeping track at home. 25-year old Johan Santana won 20 games this year and then beat Mike Mussina in Game 1 of the ALDS, now known as the LAST PLAYOFF GAME THIS FRANCHISE WON. I can't wrap my brain around this. That's so much talent. The Royals and White Sox have won more World Series banners than Twins have won playoff games since 2004. That's baffling. That's perplexing. I need a nurse to administer a sedative in the form of a comically large Animaniacs style syringe to calm me down and help me snap back to reality. The Twins have been in the playoffs so many times, with so many different rosters, against so many different teams. That amount of scenarios should lead to at least ONE win over 16 years. Nope. Not for the Minnesota Twins. I'd rather be a Mariners fan and know we just will not make the playoffs no matter what. That feels like a far less maddening existence than this torture.