*Update: I just double-blogged Pat on this but I've been overdue for an unprofessional double-blog SO LEAVE ME ALONE. #BarstoolDifference

Growing up in a strict Baptist family, Nikole Mitchell was expected to be quiet, reserved and sweet. But her dreams weren’t quite so conservative.

So instead of pursuing the pole, the mother of three went all-in on religion — and became a pastor.

Around the same time she snagged a pastor spot at her church, she also started to realize she identified as bisexual and pansexual (attracted to people regardless of gender identity). This left her conflicted since Mitchell felt she had to hide this life from her church, but in 2017 she decided to come out.

And things sort of snowballed from there…

Faced with rebuilding her life, she wondered what was next.

“I started following my life coach’s wife [on Instagram] who was doing lingerie modeling,” said Mitchell. “I was kind of triggered by it . . . but I was also magnetically drawn to it.”

Mitchell knew she wanted to delve deeper into her own sexual desires and signed up for a class called “Sexpress You.”

“It was all about expressing your sexy self and that was the linchpin that I needed,” said Mitchell. Right after, she linked up with a photographer to do her first nude photoshoot.

Fast forward a bit & now she's got an upcoming appearance on Jimmy Kimmel, a thriving OnlyFans page where you can pay for explicit photos & videos, and a 'life coach' business where you can cough up cash for the following: 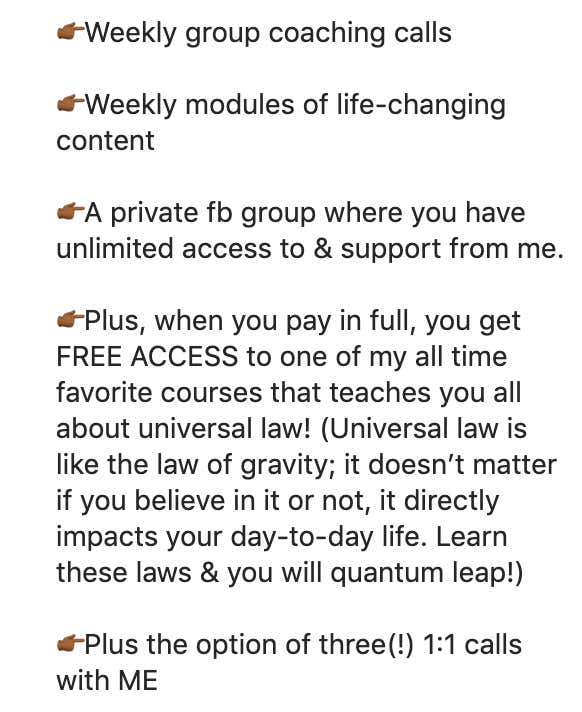 Taking a quick break to ruminate on all this for a second… As someone who grew up pretty heavily involved in the Catholic church, I remember sitting in Sunday school learning that, as a girl, any time I did anything sexual I was willingly giving away pieces of my soul that I'd never get back, and that boys only felt 'chimichanga love' towards girls before marriage (I swear to God 'chimichanga love' was a real term used).. So.. boys only wanted us like they want a deep fried burrito, and if we gave them that * deep fried burrito (* PUSSY WRAP SUPREME) that was our failing in God's eyes, and those eyes were ALWAYS WATCHING. (God must have been furious when I gave that terrible, dry, rebellion-based handy in the woods behind church camp Junior year in what my friends now refer to as 'The Carolina Squeezer Incident'. J.A., if you're out there I'm sorry and I understand now why it got so soft.)

Because I'm an idiot, I took all that stuff deeply to heart and it made me feel guilty and that I must be inherently 'bad', weird and wrong for any sexual thoughts, feelings & actions I took well into my 20s.. Which sucked 'cause I've been pretty into sex for a hot minute, and I could have avoided some seriously awful, unsafe situations, mental struggles about my worth, & years of faking enjoyment had I been better educated about sex in a healthy, realistic manner.

Lastly, in all of these Sunday lessons, there was never once a single mention of LGBTQ+ anything. Love and sex was simply man + woman, no other way. So if I was feeling 'bad' & guilty for my straight horned-up thoughts, I can only imagine some of the kids sitting to my left & right thinking they were doomed to eternal damnation no matter how good a person they were to others. Not great!

Whoa, ol' Katie-Went-Off-Track. So uh, anyways, yeah, what I think I'm trying to say is that I get how, not all, but a lot of church-heavy upbringings can severely warp peoples' ideas of sex/sexuality, & that if/when you finally move on you feel liberated, free & want to share that with others as you let your flag fly. And I say, 'Wave it, honey'. If it's consensual & you're not hurting anyone then you do you, no shame. Sex is pretty neat.

………At the same time I have to admit… I'm looking again at Mitchell's 'life coach classes' (Life-changing #content modules?! THREE 1:1 calls with her PERSONALLY?!) and waaaay deep down a little voice in my head (that's been watching The Vow) is shouting, "GRIFTER! SHE'S A GRIFTER TAKING ADVANTAGE OF PEOPLE SEARCHING FOR ANSWERS NOW, JUST LIKE SOME CHURCHES DO!"… There's something about her sugary-sweet messaging & the format she uses that reminds me of posts from my old friends selling pyramid scheme Scentsy candles or ItWorks! body wraps… My Spidey senses are ah-tinglin', especially stumbling upon these…

But hey, perhaps I'm just jealous because I'm probably still going to Hell (#CarolinaSqueezer), haven't found my own cash cow yet, and she's had 3 kids yet still has a far lovelier body than I could ever dream of. So I digress… You do you, sexy pastor. Get holy on that pole-y, and spread the Word & whatever else you want.

Breaker-breaker-1-9… I got a tent in my basketball shorts that could fit the whole 10am-Saint-Stephen's-mass-crowd in Boston.