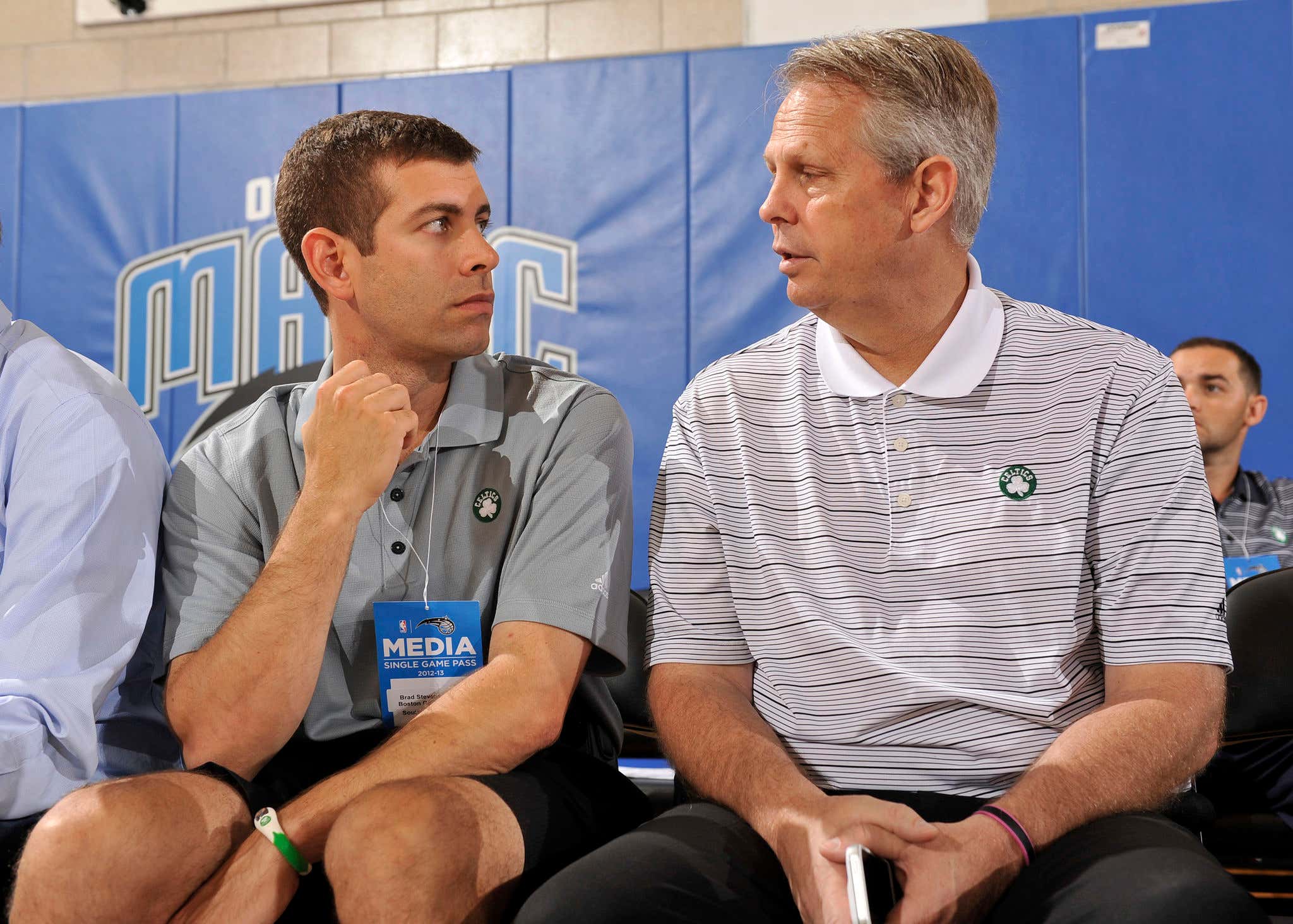 Maybe you heard but the Celts blew their spot at the Finals last night. It was this whole big thing. We don't need to go into the details, you can read the previous blogs on that. Well with another disappointing end to the season you knew what was coming next. The hot takes that this team needs a new coach, should blow things up, basically different variations of this tweet

It's a common reaction that fans have, especially Celtics fans whenever they lose a game or see their season end without a title. I have people tweeting me that Brad needs to be fired when they lose a regular season game in January. But now that the offseason is officially here, I think it's important for everyone to realize the current situation of this team and what options they might have moving forward. No, there will not be a team out there that will give you one of their young, cost controlled best players for your trash and multiple low first round picks.

1. If Gordon Hayward turns down his player option, that does not give the team 30M+ in cap space. If he restructures for a lower number, they do not get that difference in cap space. No matter what happens with Hayward, the Celts are over the cap.

2. They will have the taxpayer MLE and the Bi-Annual Exception at their disposal. It's unlikely they use both according to way smarter people than me, and based on previous cap projections the taxpayer MLE was around $6M and the Bi-Annual was around $3.8M for next season. Since the world ended and nobody knows what the cap will be for next year, use those figures as a baseline for what we are about to talk about.

Let's start this exercise with Gordon Hayward. I am of the line of thinking where I'm cool if he picks up his player option, and even happier if he restructures for a lower number and more years. Here's why. First, you aren't going to get equal value or really anywhere close to it with a trade. You just aren't. No team is going to take on that type of salary given his injury history and the fact that he's UFA after next season. There's also no expiring contracts that even make sense.

Here's another reason why you should want Gordon Hayward on this roster next year. For starters, he was great in his first healthy season and in the bubble pre-injury. You simply are not going to find 17.5/6.7/4.1 on over 50% shooting for MLE money on the free agent market. Go ahead, tell me the name of who that guy is. The latest rumor out there is a potential Hayward for Oladipo/Myles Turner swap. Well, if you are concerned about Hayward's injury history, is Victor Oladipo the answer? To me, no. Also, Turner is in Year 1 of his 80M extension, the Pacers do not have to trade him.

Of all the free agents out there that could be had for around MLE money, the list isn't all that great. Any free agent that has any value is going to be getting more than 6-9M a year. This team needs shooting depth right? Well names like Joe Harris, Kyle Korver, Kent Bazemore, David Bertans, etc are for the most part priced out. Maybe not Korver, but if he comes back and doesn't retire, why would he leave MIL if they are interested? There is nothing on the market that is going to be able to replace what a healthy Hayward gives this lineup. See for yourself. First picture is free agent guards, second picture is free agent forwards 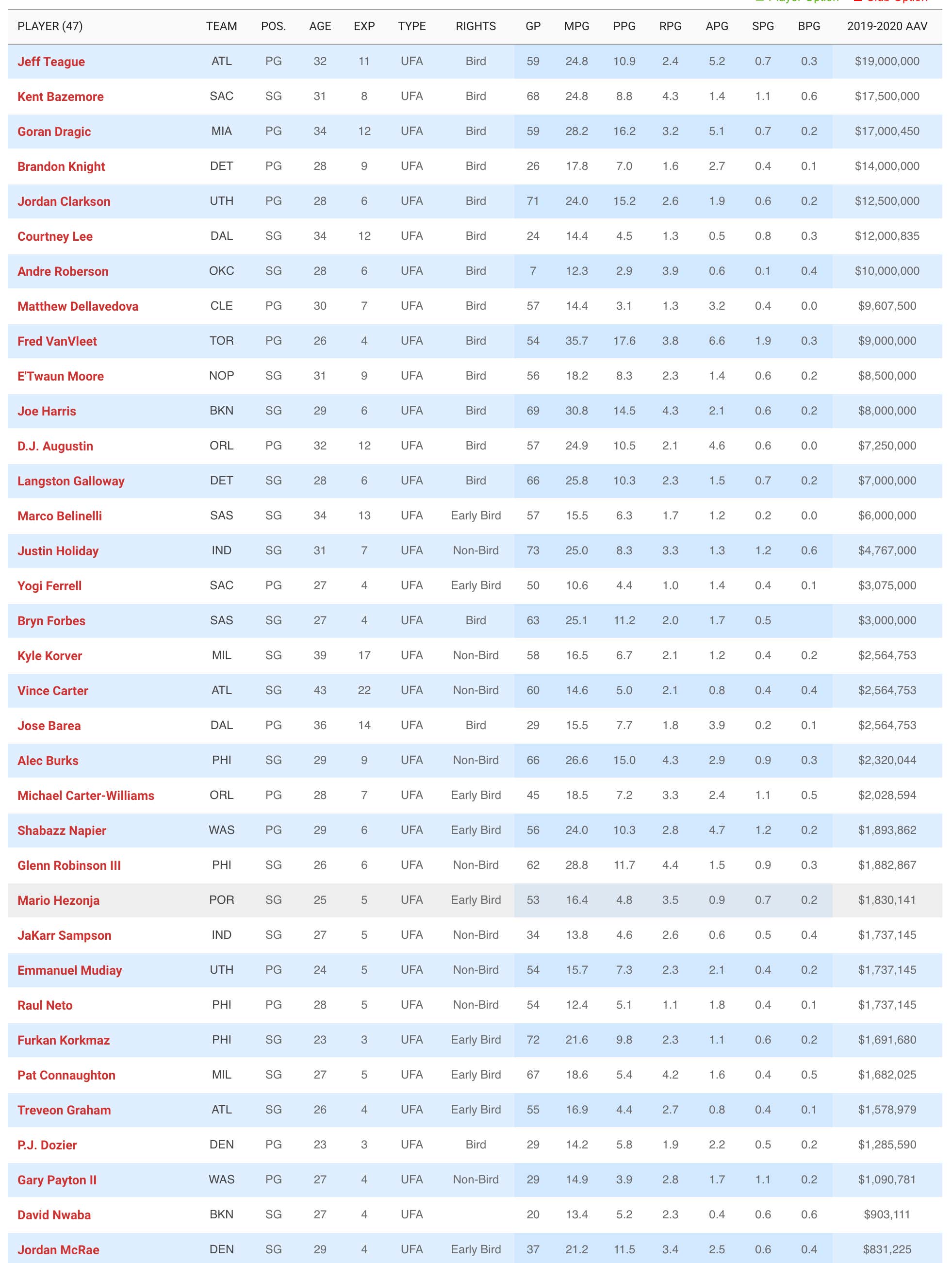 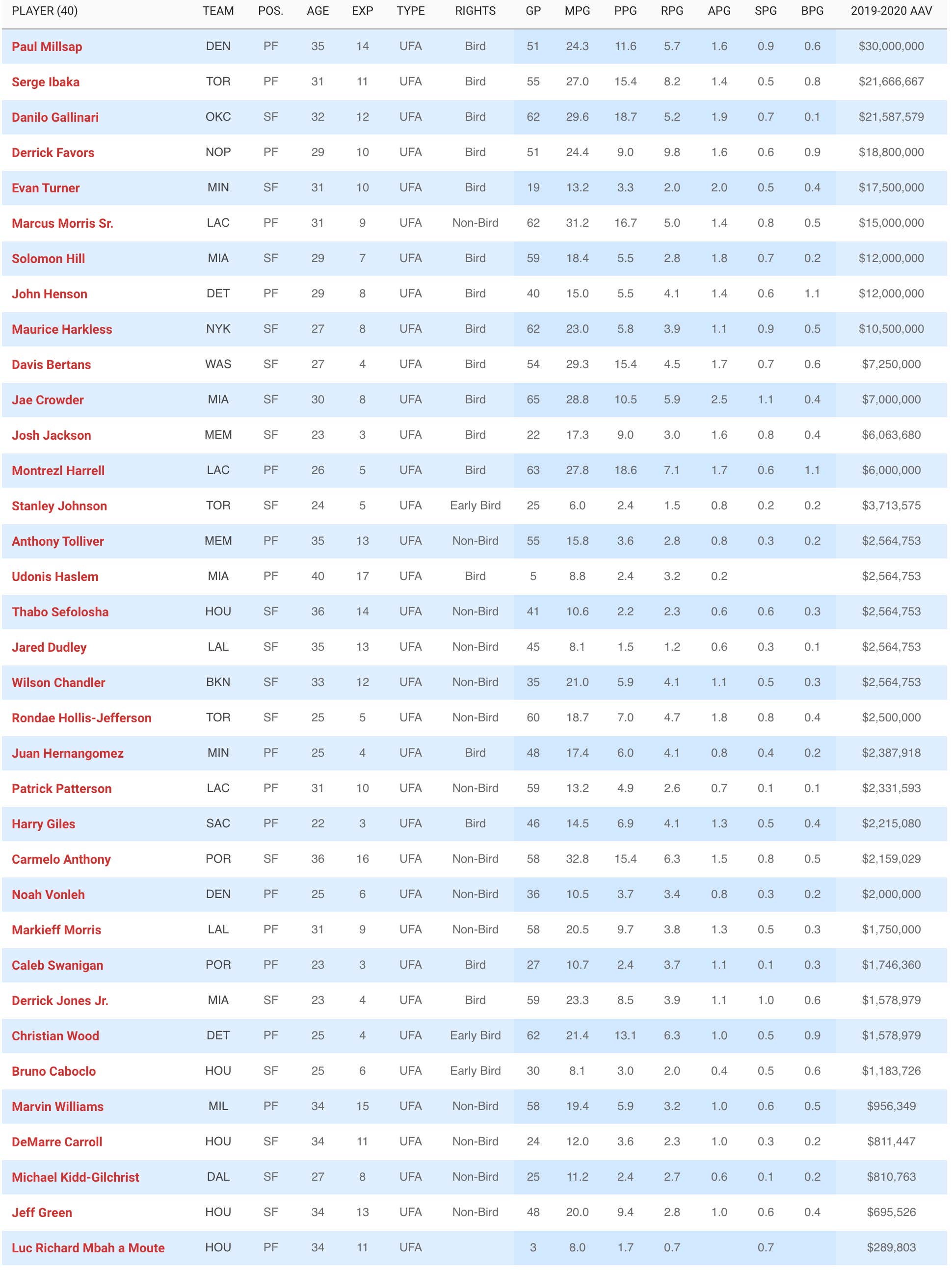 Remember, the two Jays also had a breakout season playing next to a healthy Hayward. I'm to believe that's an accident?

If you want realistic names that they could use that MLE on, barring something we don't know (like a vet taking a discount), the best name out there is probably Harry Giles in SAC. He's a young big with potential that fits the Celtics timeline, he's best friends with Jayson Tatum, he made like $2M this year and enters the offseason as a UFA. He seems like he's ready to be out of SAC after they didn't extend him, and going from 2-6M would be a nice little bump. He did have a 25% DREB rate, and at 21 years old you're banking on him being over his injury issues. He's a project, but a potential option.

When it comes to adding shooting, knowing what we know now the best option is through the draft. Identify who that shooter is, and if you have to package picks with end of bench players to maybe move up a few spots so you can avoid another Tyler Herro situation then you do it. That answers your bench shooting question and gives you a cost controlled asset.

To the crowd that wants to "blow it up" and do something drastic like split the Jays or maybe move Marcus Smarty. Think about what you're saying and the reality of how this season ended. The Celts didn't get eliminated because there was a clear talent gap. They got eliminated due to careless play and blowing leads. To me, you only blow things up if you do not have the talent to contend. That is not the case here. That talent has to play better and execute better down the stretch, there is no question about that. But we're talking about a group that had a top 5 defense, top 5 offense, and was 2 wins away from the Finals with their core players being 22 and 23 years old. The future of the NBA is two way wings. You have two elite players at that exact position who just had really good postseason runs. I'm not sure how that screams "blow it up" or "trade major pieces". Even if you want to get rid of Smart because you're mad at how he shot the ball. Again I'll ask, for who? To me, it feels more like you identify your areas that need improvement and add around the edges. Draft a shooter, get an experienced vet or a big with the MLE, and go from there.

I can understand the frustration of the fanbase, but reality is not sports talk radio. Screaming "blow it up!" without actually acknowledging what is out there in the real life free agent market makes no sense. Assuming other teams will give you their best player at your position of need for 50 cents on the dollar is not real life. This is not 2K.

This also doesn't even factor in the million scenarios that we in the general public don't even know about. The point is, when you take a step back and look at where the Celtics are in relation to the East and the rest of the league, this is not a dire situation. It's disappointing, they blew their great opportunity, it's frustrating, but their window has not closed. They showed us this core is good enough to compete. Where they lacked is the supporting cast and consistent reliable bench players. You can find that without gutting your core or trading a main piece or firing your coach.

Thank you for coming to my TED talk. Rant over.