Earlier today, our guy Carl blogged about Duncan Robinson texting Mark Titus for advice on how to get into sports media since he wanted to work for The Ringer:

And then with that the picture of Duncan Robinson's LinkedIn starting to emerge: 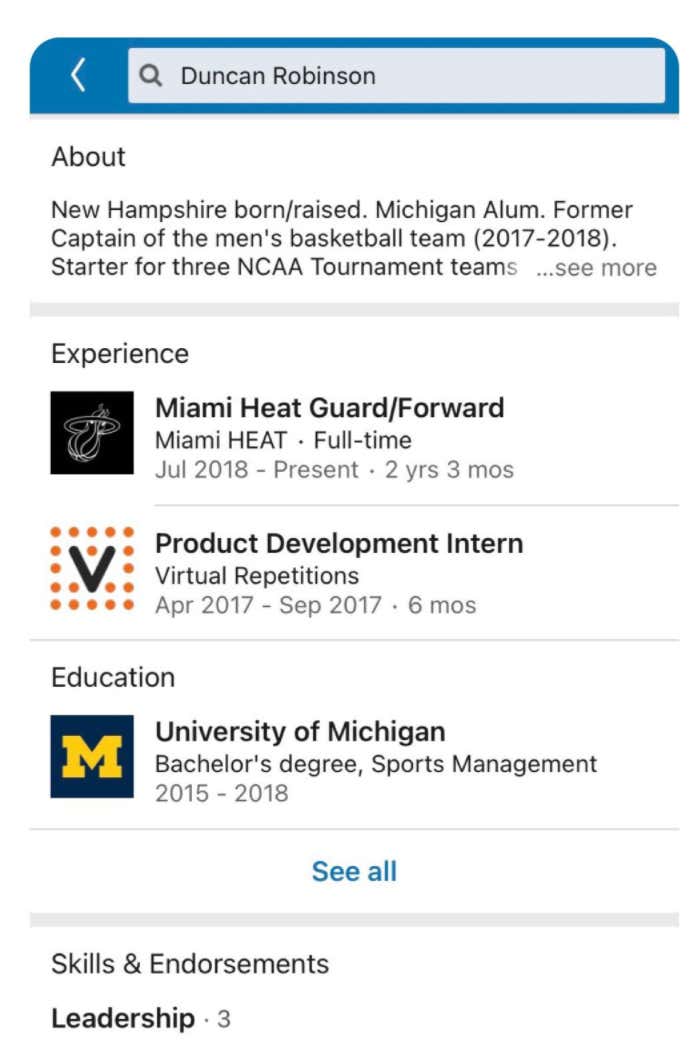 It's just another example of how ridiculous it is that Duncan Robinson is in the NBA, let alone starting in the NBA Finals. This is a guy that started his career at the Division III level. Bet you haven't heard that story yet. Did you know that? Has it been mentioned once? I digress, but yeah, Robinson started his career at the Division III level before he transferred to Michigan. Talk about your all-time upgrade. Going from a great D3 program to John Beilein.

Then at Michigan he was good. I don't want that twisted, like he was a damn good college player, but he wasn't a regular starter for Michigan He started 27 out of 36 games his first year then 3 of 38 and finally 19 for 41. Those sort of guys don't tend to become starters in the NBA unless you're playing on something like 14-15 Kentucky team where you have to come off the bench in a platoon system. On top of that it's not like he was lighting it up when he played either. I know Michigan's system is balanced based and not the fastest, but the most he averaged was 11 per game his first season. That said he was a career 42% shooter from three and clearly that translates.

Then you fast forward and the dude signs a Summer League contract with the Heat before a two-way deal. He wasn't expected to play in the NBA let alone starting. That's why it's even funnier seeing the LinkedIn profile. He was ready to get some internship and hope it turns into a job. Don't think he'll need to update LinkedIn for a few years though but that's just a hunch.