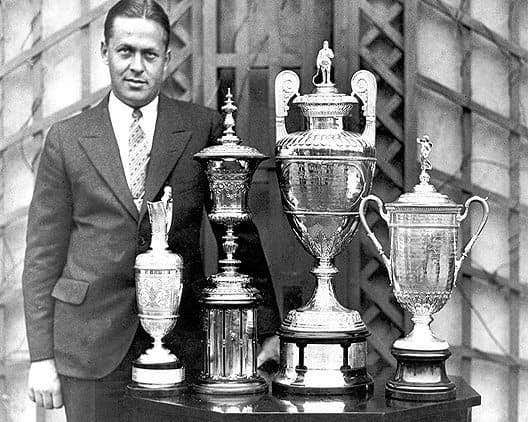 Bobby Jones completes a Grand Slam, winning the U.S. Amateur. Jones had previously won the Open Championship and the Amateur Championships in Britain.  After a hero’s welcome in New York, Bobby Jones won the U.S. Open for the second consecutive year. He completed the Grand Slam with a victory in the U.S. Amateur, beating Eugene V. Homans 8&7 at the Merion Golf Club near Philadelphia. Following the Grand Slam, Bobby Jones, who never played professionally, retired from competitive golf.

Robert Tyre Jones Jr. was born on March 17, 1902, in Atlanta, Georgia. Battling health issues, Jones played golf at a young age to help strengthen his muscles. This enabled him to become a golf prodigy at the age of six. When he was 14, Bobby Jones won the Georgia Amateur Championship. The win earned him an invite to the U.S. Amateur Championship. Jones would reach the quarterfinals in 1916, showing that greatness was only a few years away.

The era of Bobby Jones arrived in 1923 when he won his first U.S. Open at the Inwood Country Club on Long Island. Jones finished the tournament at +8 in a tie with Bobby Cruikshank of Scotland. Bobby Jones would win an18-hole playoffs by two strokes.  When not playing golf, Jones was getting his education. Eventually, Bobby Jones would pass the bar exam in Georgia and work as an attorney in his father’s law firm.

Three weeks after he won the Amateur Championship, Bobby Jones, who place a large wager on himself, completed the British double, winning the Opener Championship at Royal Liverpool. Jones, who trailed by one stroke heading into the final round, finished at +3, two strokes better than Leo Diegel and Macdonald Smith. Returning home, Jones was given a ticker-tape parade in New York, for becoming the first American to take the British double.

At the U.S. Open at Interlachen Golf Club in Minnesota, Bobby Jones was the only golfer under par, again holding off Macdonald Smith by two strokes. After his win in the U.S. Open in July, sportswriters began to talk about Jones pursuing history, creating the term Grand Slam. The 1930 U.S. Amateur was more of a coronation than a tournament at the Merion Golf Club, as Jones won the final 8&7 over Eugene V. Holman.

After his Grand Slam, Bobby Jones retired from competitive golf, feeling he had nothing more to prove. He would work on his masterpiece, designing a new course that honored the legacy of St. Andrew’s in his hometown of Augusta. The new course would host a new tournament in 1934 called the Masters.