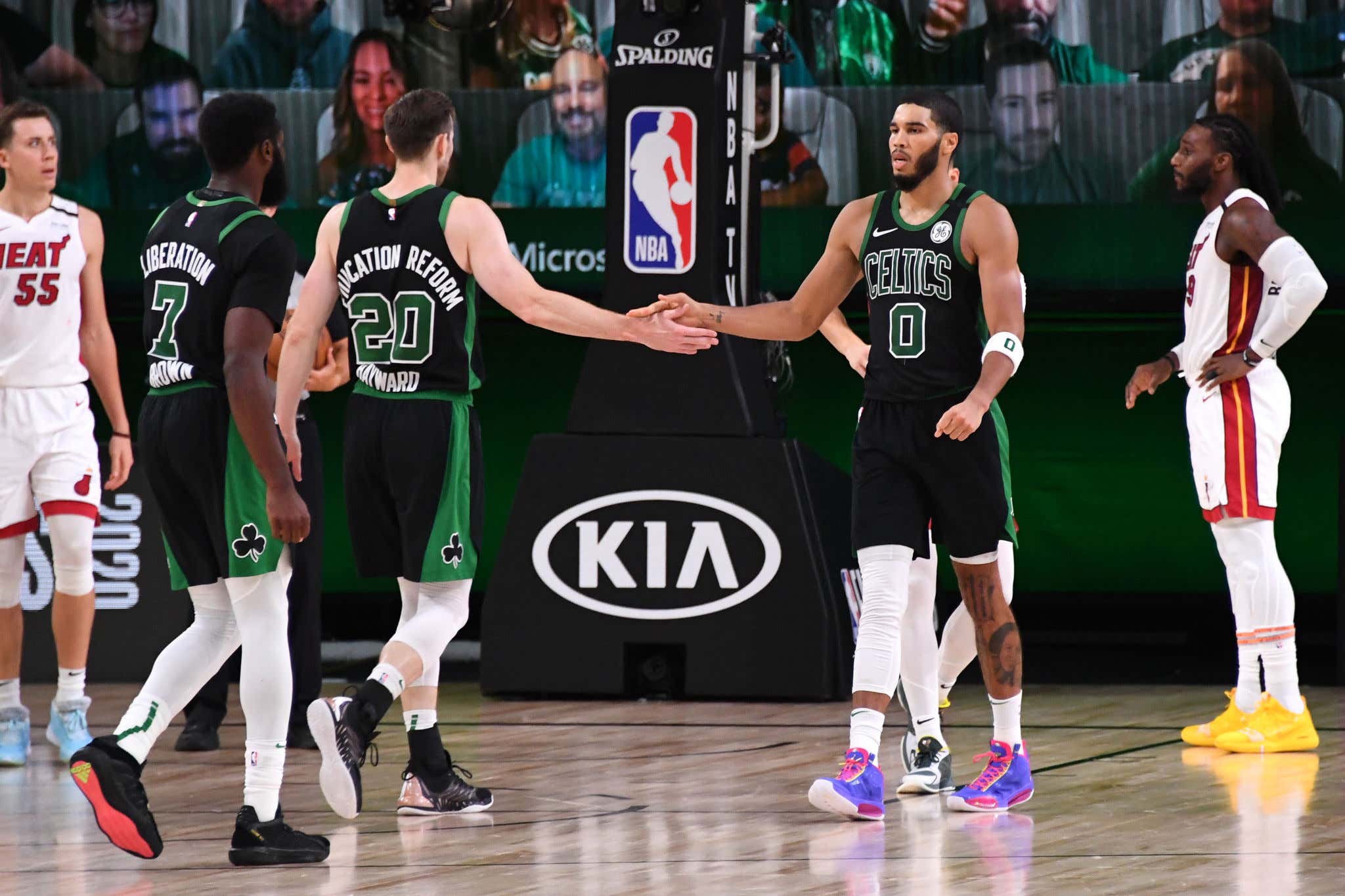 Boy was this a relief. After playing like absolute dogshit in Game 4, who could blame you if you thought the Celts officially threw away their season. They looked terrible, did all the things we pray they wouldn't do, and overall I thought the Heat were the tougher team that clearly wanted it more. So heading into Game 5, I had no idea what to expect. We've seen this team respond well to adversity at times like in Game 3, but then also lay an egg when you expected them to show up like in Game 4.

But here we are. Still alive. Now don't get it twisted, the Celtics are still in a big hole. You won't win a series because you made it 3-2. They could absolutely lose this thing in 6 if they come out and play like they did in Game 4. But if the Game 5 version of the Celts is the one we get on Sunday, they have a chance to keep their season alive. It's like Marcus Smart said

One game, one quarter, one possession, at a time. Can't win two more until you win one more, that's how this thing works. All we saw last night was a team that fought hard, played with the right energy and for once didn't turn the ball over. When they've played that way this series they've been tough to beat. Now we just have to see them do it consistently.

But before we can start to think about Sunday, we first have to relive what we saw last night.

- Jayson Tatum will get a lot of the headlines after this game and he for sure deserves the love. But for me, I don't know how anyone could watch this game and not think that Jaylen Brown was their best and most important player on the floor. That is why he gets the top spot in this blog, perhaps the highest achievement you can have

I'm inching closer and closer by the day to thinking it might be disrespectful to Jaylen to talk about him like he's only a #2. I don't think enough people are talking about not just what an awesome playoffs he's having, but what a monster series it's been for Jaylen as well. See for yourself

As you can see, the production is similar to what we've had since the beginning of the bubble playoffs, but his efficiency has gone WAY up. Did you know in the 4th quarter in this series Jaylen leads the team in scoring (7.6) and is shooting 66/64% from the floor? By comparison, Tatum is shooting 37/23% in the fourth. I think it's fine to say that Tatum might have the higher ceiling, but Jaylen Brown has been the best player for the Celtics in this series and I'm not sure it's close.

Take last night for example. With the whole team looking beyond lifeless to start the game and everyone playing like shit, it was Jaylen's energy that kept them in it. Then, when things started to turn in the second half he went 8-12 for 18 points including 12 huge fourth quarter points on 5-7 shooting. He was their closer. Outside of that one bad defensive play when he turned his head and lost Duncan Robinson in the corner, I thought Jaylen was active and engaged on that end of the floor as well. They'll need another performance like this from Jaylen but the good news is nothing was really all that different from what he does night in and night out.

- And then there was the other Jay. I'll tell you what, when Jayson Tatum is in his offensive zone, lord is he terrifying

and that's pretty impressive. The biggest difference from Game 4 to Game 5 was it felt like Tatum was engaged right from the jump. Even though he started slow from the field (0-3 in the first quarter), it didn't feel like he was sleepwalking like it did in the previous game. Offensively once he started to get in his groove he became uber aggressive, finishing with a game high 14 FTA, and frankly this is the effort they are going to need the rest of the way. When his shot isn't falling, find a way to still impact the game. When he's starting to heat up, play through that motherfucker until the Heat prove they can stop it.

- Quick question that I didn't really get an answer to last night. For all the people who did nothing but fill my mentions killing Brad and demanding he be fired despite the players turning the ball over 10000 times. Does he get all the credit now for how they played last night? That's how it works right since it's always on him? Weird I didn't see too many Fire Brad comments last night. Interesting.

- Finally, this team got Good Theis. When that happens it completely changes the dynamic of this team

If we're going to be honest, Bam had been ruining Theis' life so far this series. Well, his 15/13 on 60% shooting with 3 blocks and 5 OREB was by far his best performance of the playoffs. The biggest difference I saw was that when MIA went to the zone and Brad put Theis at the FT line, he was aggressive. He didn't seem to be tentative and have no idea where to go or what to do. Time and time again he caught the ball and looked directly for his shot which was wide open every time. I'm not sure they win this game without the effort that Theis gave, and hopefully this gives him the confidence I'm sure he needed after getting tossed around in the previous four games.

- Make no mistake though, and this feels really weird to type, but Enes Kanter may have saved this season. Brad pulled the right strings and went to Kanter in that second quarter, and man did he make an impact

You have to be selective in how you play Kanter, but when you work it right he can be a legit weapon. The Celts needed those easy buckets, and for whatever reason the Heat didn't really attack him defensively which allowed him to actually see the floor. He only played 10 minutes, but his 10/4/2 were extremely important in helping this team get back on track after a slow start.

- Finally we saw this team fight back. They could have called it a season once they started so slow and then got down by double digits. Plenty of teams do that. Instead, this team locked in defensively and crawled their way back. They did not back down in the face of adversity. Admit it, that makes you happy. That gives you confidence that if it happens again in Game 6, we know this team is capable of responding.

- Look at what happens when you take care of the basketball. Only 11 turnovers on the night and 6 in the second half when things really started rolling, that's what is so frustrating about this series. If the Celts don't play like assholes and throw the ball to the other team, they can beat anybody.

- I also think this was one of Smart's best games of the series. Despite him missing multiple bunnies, I felt like he was in control the whole night and was a passer first. He finished with 12/8/8 with 4 steals on 3-9 shooting so it was a classic Smart performance

and the best part was he only took 1 FGA in the fourth quarter. Compare that to the 14 FGA from the two Jays, and it felt like everyone knew their role down the stretch of this game. That is so important and cannot be understated.

- I mean what else can you say other than that first quarter was one of the worst 12 minutes of basketball we've ever seen this team play. It was their worst quarter of the entire postseason, they shot just 25/25% and had 4 TOS, and 8 of their first 9 shots were threes. The annoying part about that is we've seen this team have success when they drive the basketball, and yet in the biggest game of the season they come out and do the exact thing that has dug them an early grave. For crying out loud what the hell is that. I'm not anti-threes or anything like that, but I would much prefer to start games being aggressive as opposed to just relying on tough contested threes. Especially when they aren't falling.

- Goran Dragic will not go away. I can't explain how he continues to be this Celtics killer, but man every time he shoots it I am convinced it's going in. The crazy part is the Celts kept letting him get to his left hand, which makes me wonder if they know he's left handed? Maybe force him to go right? Just try it.

- I wouldn't say Gordon was bad, but he was mostly "meh". He had that tough stretch where he missed a wide open three and then threw it out of bounds which wasn't great, and he's having a tough time knocking down wide open looks. Obviously he's working his way back, but I also felt like guys were getting by him too easily as well. If this team is going to keep playing, they need Hayward to be more impactful. He was just sort of "out there" and never really put his stamp on the game in my opinion.

- Let's also tell the truth here for a second. Celts got a little lucky with how poorly MIA shot the ball, especially on wide open looks. They finished just 7-36 from three, and that's not going to happen again. It's a little concerning that you had to rely on that sort of luck just to pull that one out, so they need to make sure they are much better at staying connected to shooters.

What this does NOT mean though is to continue to foul three point shooters. Jesus Christ is that annoying. You play great defense only to fuck up at the end and reward the jump shooter. Those mental mistakes cannot happen when you are fighting for your playoff lives.

- This is something I think both fanbases will agree with. The officiating in this game was so terrible, for both sides. On the Celts side you had the bullshit Butler AND1 continuation that was eventually overturned, there was Dragic CLEARLY leaning into Theis on that three, it was so bad. The on the MIA side you had that bullshit offensive foul on Dragic at the end where he took a normal layup and his knee his Theis in the dick. That's a no call and was huge because it was Dragic's 6th foul. Then there was that pointless review on the hostile act when Kemba got hit in the face only it definitely wasn't hostile. The whole thing was a mess.

At this stage of the playoffs, you can't have officiating be this poor. The games are too important. Officials keep getting baited into terrible fouls, there's no consistency from game to game, it's honestly embarrassing for the product. These games have been so good it's very annoying how the officiating continues to be so bad for everyone invovled.

So here we are. Still alive to fight for another day. Get all your chores done today because tomorrow we once again enter a game with the season on the line. Win that one and force a Game 7 and who knows what happens. This team has shown time and time again they can beat this Miami team, as long as they don't shoot themselves in the foot.