Source- A man is on the loose in Highland County after escaping the courthouse during his sentencing on a drug charge. Nickolaus Garrison, 34, got away Tuesday morning. Garrison was in the Highland County Common Pleas Court for sentencing on a felony meth possession charge. He faced up to a year in jail and a fine of up to $2,500.

Blogger's Note: I don't know if the kids say Full Send anymore but I couldn't think of another phrase to use and always wanted to say it, so I went for it after Zach said it was okay

Please forward any complaints of the use of the phrase to Zach unless your complaints are that I'm too old to be saying it, in which case you can send them to me

As a cream cheese soft blogger that has only gone to court for a speeding ticket (fuck you very much Claverack, NY) and the occasional jury duty appearance that I got out of, I am not sure what the protocols are for escorting a suspect around a court room before he is sentenced. However, I will play the role of Armchair Quarterback and say that you should probably have the suspects arms or legs in some sort of shackles that prevent him from fleeing the court room posthaste. Especially if he is a meth suspect, the drug of choice for people who like to escape on foot, even if it means they have to run through a literal wall.

Now I know what you are thinking: Clem, you ignorant slut. Why are you burying the lede that this alleged meth head has the fastest first step the world has seen since your coworker Deion Sanders was shutting down WR1s back in the day? Well the answer is quite simply that he isn't even the highest rated guy on my draft board in this video. Yeah he has good vision and the unique way he spells Nickolaus makes him 10% faster in my mind. But am I really going to invest decent draft capital into a 34-year-old that plays a disposable position like running back and potentially has multiple strikes coming down on him from Commissioner Goodell? No thank you. Not in this economy. Instead, I'll take the cop that acted before he thought and put it all on the line for the team. 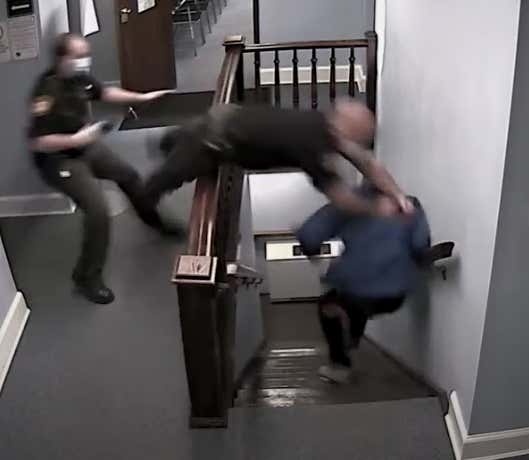 He may not have made the play, but at least he went all out and tried. You can win with a player like that if you coach him up right, as long as he doesn't hit IR after that tumble down the stairs. Don't hold his teammates against him, like his coworker that let the suspect go while he had his back turned or the linebacker that couldn't shed the block of a wooden gate with three steps on the suspect in the open field. 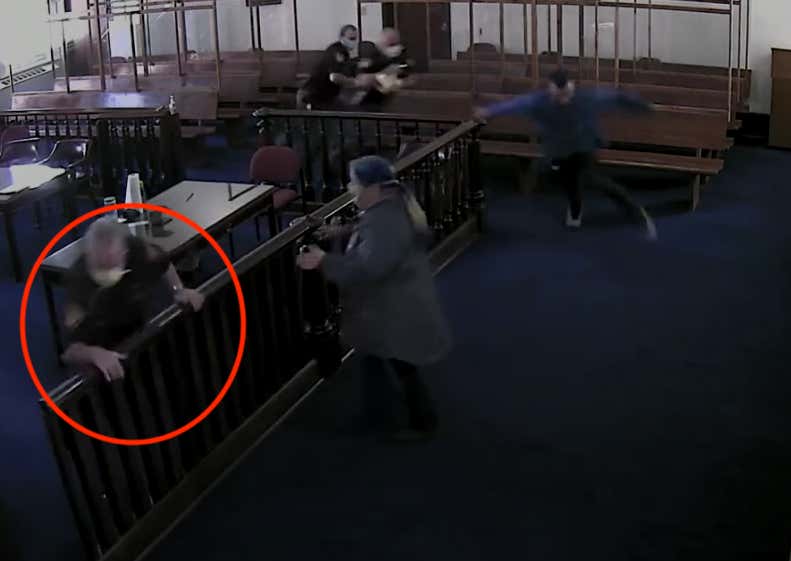 I hate to say it because he clearly was playing hurt and has some years on everyone else in this video. But I gotta take this lollygagger off my big board for slow reaction to the play and a limp that is a bigger red flag than anything hanging in Beijing right now.

But I'm all in on the cop that jumped down the stairs. Don't let his bad teammates distract you from the clear talent you see on tape, which is pretty much what Bill Belichick does every year when he plucks the most underrated player from one of the other 3 AFC East teams once he hits free agency.