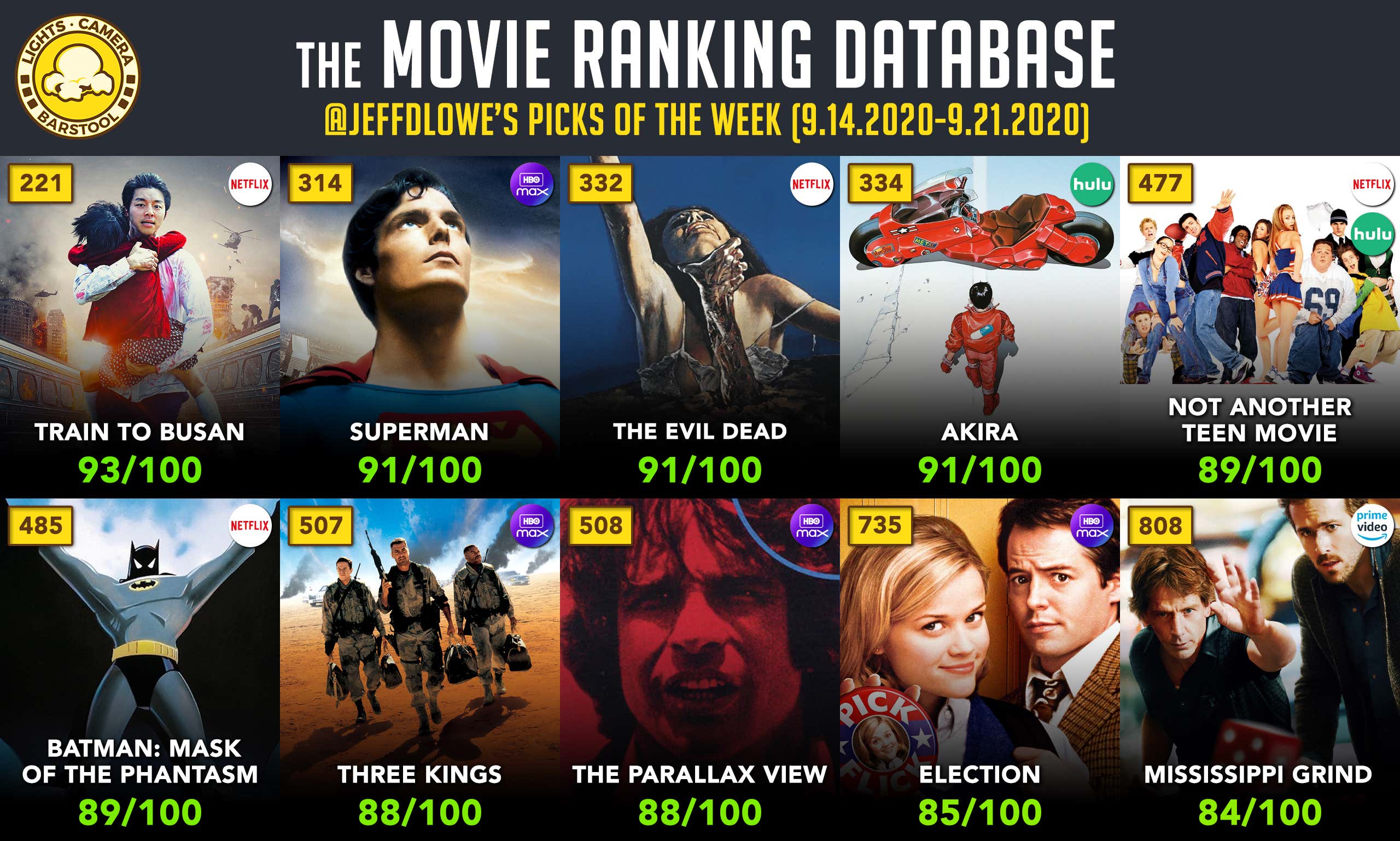 We are BACK and this is the first group of movies officially arriving from our Movie Rankings/Streaming website of over 4,000 movies myself (and KenJac) have ranked and seen over our lives…

Aside from the Random Movie Generator, and the ability to see where movies are streaming, we are adding user profiles in the next two weeks so you can track movies you've seen, or want to see. After that launch, the next step will be the ability to rate your own movies. Big time stuff ahead! As always, make sure to subscribe to Lights Camera Barstool as well.
--

221) Train to Busan (93/100) - Netflix: Without any hesitation, 'Train To Busan' is one of, if not the, best zombie movies ever made, and it is right there for viewing on Netflix. As evidenced by 'Parasite' winning Best Picture this year, it shouldn't be any surprise that Korea has always pumped out great movies, and this 2016 horror-zombie-thriller is no different. Unlike most movies in the genre (sometimes not to a fault), 'Train to Busan' carries a ton of depth across various key elements of the movie, from story to message, characters, and more. This movie elevates the genre to levels we haven't quite seen before and is an absolute must-watch, even if you don't typically love zombies.
--

314) Superman (91/100) - HBO Max: It's Superman done right, a forever classic, and a movie often overlooked when it comes to the best in the comic book genre. With the launch of HBO Max, DC's top movies finally got some shine again amidst the forever-changing landscape of the current DC movie slate. It's funny that a genre like comic book movies has so many old classics hold up so well when you consider the number of special effects and futuristic technology that goes into making the modern ones. Also, it goes without saying that Christopher Reeve will always be the greatest Superman.
--

332) The Evil Dead (91/100) - Netflix: There's no doubt that 'The Evil Dead' is quintessential, must-watch horror. Sam Raimi's eye for unique horror is distinct, and 'The Evil Dead' movies are probably the best examples of his top-notch strengths. It's both a horrifying movie and one that is doubly tough to stomach. Sitting at an NC-17 rating, it isn't a movie for the faint of heart, but anyone who enjoys horror and hasn't seen this movie needs to change that fast!
--

334) Akira (91/100) - Hulu: I've been on an anime kick recently, a genre I am ashamed to admit I never really got into. One of the movies in the genre that I had seen prior to my kick, however, is this one right here: 'Akira'. A fairly famous movie on its own, not just as an Anime, 'Akira' really doesn't fuck around at all. The movie explodes off the screen when it comes to both story and the striking visual elements. It is as intense as you'd expect from an anime movie and it leaves a lasting impression on you after your first viewing. While Taika Waititi was attached, 'Akira' is a movie I never want to see turn into a live-action adaptation, there's just no chance they can re-capture the magic of the animated version.
--

477) Not Another Teen Movie (89/100) - Netlfix, Hulu: What is there to even say about this comedy classic. That's right… a classic. This isn't some sort of unique take from me, many people love 'Not Another Teen Movie', I am just saying that we should be holiding it on an even higher level. This is a great comedy and parody. It hits almost all of its beats and still holds up in 2020. My recent rewatch had me worried this was just a funny movie of the past, but it isn't at all. The movie is, and always will be, endlessly hilarious.

485) Batman: Mask of the Phantasm (89/100) - Netflix: Speaking of animated movies, here's one I saw at a young age but never really appreciated until I was older. Kevin Conroy? Top tier Batman. Mark Hamill? Top tier Joker. Things have been far less hit-or-miss for the Batman franchise than Superman, but the character has still seen some misses for stories that just don't quite fit the character. The tone of 'Mask of the Phantasm' is perfect for the type of character Batman is supposed to be across all forms of media, and it fits well with the setting, villains, and themes of the movie. It's a movie often forgotten about when discussing the best-of-the-best with Batman, but it's one that should always be included.
--

507) Three Kings (88/100) - HBO Max: Once again I will throw around the term "speaking of," because speaking of forgotten movies, I always am surprised to remember that 'Three Kings' both exists and is a fantastic movie. It's a war movie, but goes so far beyond that as blends and mashes up many different genres and story elements that really make it stand out. While it may not be everyone's cup of tea, 'Three Kings' is also a George Clooney movie, and I am always a sucker for anything he stars in.
--

508) The Parallax View (88/100) - HBO Max: I love a good political thriller, hell, I've watched 'A Few Good Men' twice in the last month or so. With that knowledge, it shouldn't come as much of a surprise that I am a big fan of 'The Parallax View'. Warren Beatty is excellent in the lead role, and the story will have the heart racing with suspense throughout. One of the best parts about HBO Max, maybe the best, is how many older movies have hit the platform early in its life.
--

735) Election (85/100) - HBO Max:  Alexander Payne has a hefty filmography with classics such as 'Sideways' and 'The Descendants', but I am sure 'Election' is at the top of the food chain for most people. Maybe I am just on a kick for movies centered around politics, but I forgot how much I enjoyed this movie until after I was done with my rewatch. 'Election' also flexes how great Reese Witherspoon has been in her career. From the start, up through now, Witherspoon has always been at the top of the acting game.
--

808) Mississippi Grind (94/100) - Amazon Prime Video: I've always been surprised that more people don't love, or talk about, 'Missippi Grind'! A movie about gambling with Ben Mendelsohn and Ryan Reynolds? Yes, please. As a big table games fan myself, I've always had a thing for 'Mississippi Grind', a movie not enough people have seen. While not perfectly polished, the movie is a great ride to go on. The movie finds a great balance between the tension and up-and-down situations of its subject material, yet still managing to have fun with the story.

--
Enjoy the picks, and see you tomorrow for another group of movies!