Nobody loves fucking with your Monday quite like social media guy Chuck and today is certainly no exception. It wasn't even 11am central daylight when he dropped this bomb on the internet, instantly triggering global nostalgic episodes : 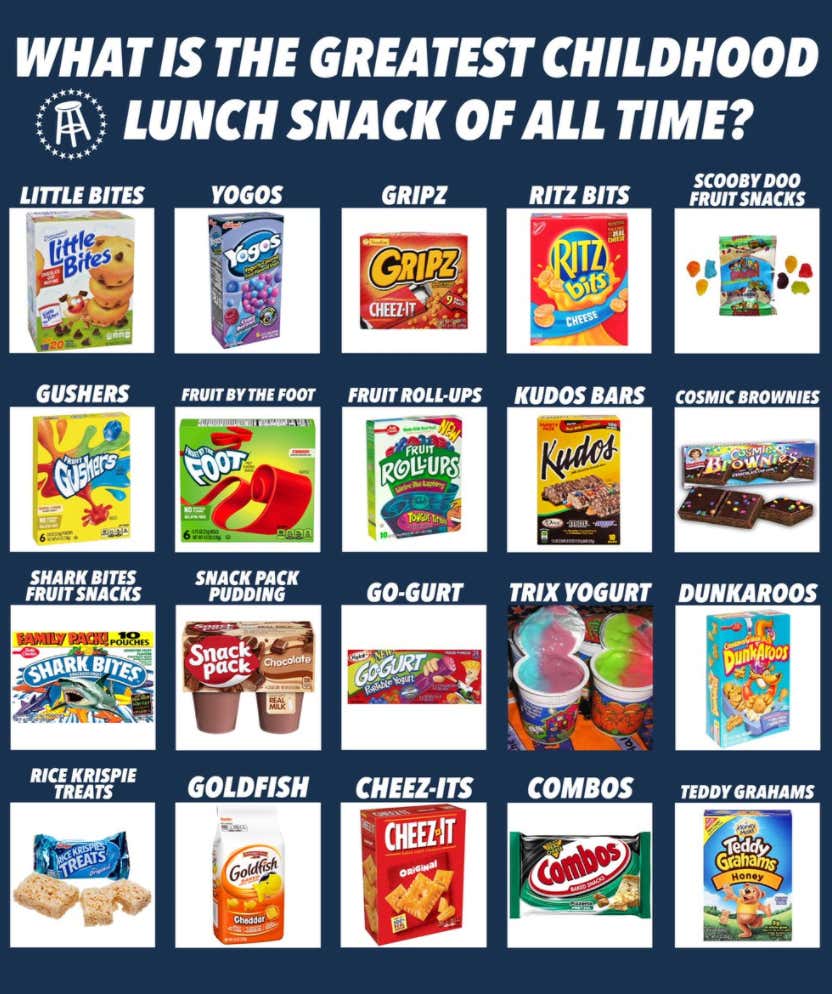 There's 20 pictures on this graphic and I have zero interest in power ranking, tiering, or grading these snacks against one another. There's a place in the pantry for everyone at some point and arguing otherwise would ignore the complex needs of Barstool's multi-generational audience. I'm not penalizing the new guy for missing out on Dunkaroos.

Instead, I'd rather come to you in celebration with a singular focus. And that celebration resides exclusively within cell A3* 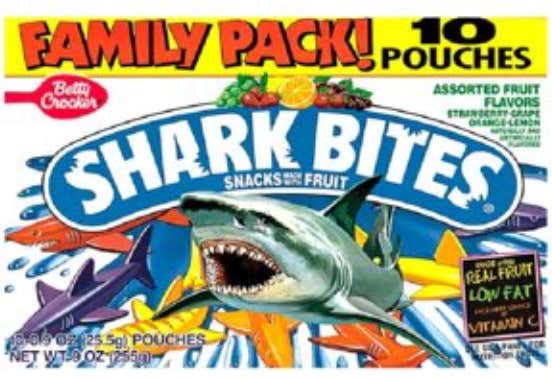 I can't tell you the first thing about this ingredient list other than whatever they're promoting is complete bullshit. Low Fat? Fuck you Low Fat. I'm here for Tasty and Delicious and Flavorful. And when you show up for TDF then there's really no better fruit snack for your brown bag than some Shark Bites. They were doing mat-color schemes before Oregon Football was even relevant. And if you want to take it another step further, special credit to the Jewel(s) brand. The ones pictured here are Betty Crocker. Maybe not the Rolls Royce of fruit snacks but Betty Crocker's reliable and there's a reason Buick's still in business.

But a couple rungs below on the poor affordable scale is the Jewel(s) brand of anything: Pop. Produce. Ranch DRESSING. If you're a product with a high margin, Jewel(s) has a private label for you. Shoutout to the classics that defined your childhood.

In this case, I want to remember that Jewel(s) fruit snacks were so fucking money because the boxes were cheaper so Mom & Dad would buy several. You got multiple bags in a sitting. In the battle of quality vs. quantity, there is no child on Team Quality when talking fruit snacks. You could have melted down boxes by the dozen and main-lined the high fructose smegma directly into my bloodstream. Even then that might not have been enough. Shark Bites were a big part of this addiction.

Also credit to Dinosaurs. Credit to Scooby Doo. Some people like the Thunder Jets and I know there's an argument for a bunch of other shit I'm missing. But the one thing you don't forget is the sensation of biting into The Great White after finishing a room temperature ham and cheese sandwich on the parking lot. I'm not trying to be a pussy, but for kids that's like when Red and the boys are drinking beers on the roof in Shawshank. That's the sensation you got with multiple bags of Sharks. Back in a time when the only thing that really mattered to you was having a good lunch after recess. A time you could trade and barter food without arousing suspicion from your peers. Those were good days, and I want to personally thank social media guy Chuck for sending me back. I would have murdered you if you left Sharks off.

*Credit to anyone who instinctively knows where cell A3 is. I respect your ability to spreadsheet.