SARATOGA SPRINGS – Adam Rupeka came to this city and gave the finger to the first cop he saw. The 35-year-old Troy man flipped off Officer Nathan Baker Saturday afternoon. Just a few seconds later, Baker was pulling him over.

Rupeka had two cameras. One was mounted on the dash of his Chrysler Sebring. The other he placed on the dash as Baker approached.

Then Baker sprays Rupeka in the face with a can of pepper spray he pulls from his belt.

Thirty seconds elapsed between the time Baker began talking to Rupeka and the time he sprays him.

Rupeka wasn’t charged with disorderly conduct, but rather obstructing governmental administration and resisting arrest. He was also ticketed for having an obstructed view.

However, Rupeka says the arrest and the use of force had more to do with the gesture he gave the officer and the stickers on the back of his car — one promoting an organization called Cop Block.org and the other saying “Film the Police.”
Rupeka admits that it wasn’t very nice to give the finger to the officer, but points out that it was within his constitutional rights.

He says the pepper spray landed him in the hospital, police had his car towed, and it cost him $153 to get it back.

And don’t try to tell me the cop wasn’t allowed to do this, I don’t care what “the law” says –

Freedom of expression is alive: The U.S. Court of Appeals ruled this week that people are very much allowed to give the middle finger to policemen, and that, in fact, you cannot get arrested for it.

This ancient gesture of insult is not the basis for a reasonable suspicion of a traffic violation or impending criminal activity. Surely no passenger planning some wrongful conduct toward another occupant of an automobile would call attention to himself by giving the finger to a police officer. And if there might be an automobile passenger somewhere who will give the finger to a police officer as an ill-advised signal for help, it is far more consistent with all citizens’ protection against improper police apprehension to leave that highly unlikely signal without a response than to lend judicial approval to the stopping of every vehicle from which a passenger makes that gesture. [Source]

Because if this is how you spend your day, driving around doing little tests like this – 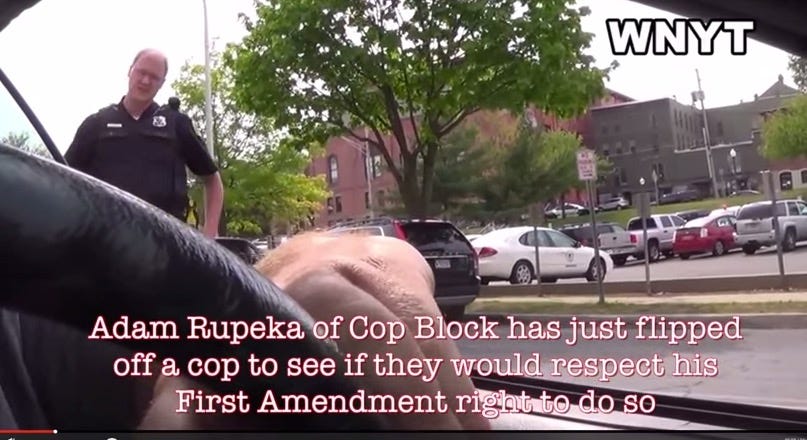 You deserve all the pepper spray ever invented deposited directly into your corneas.