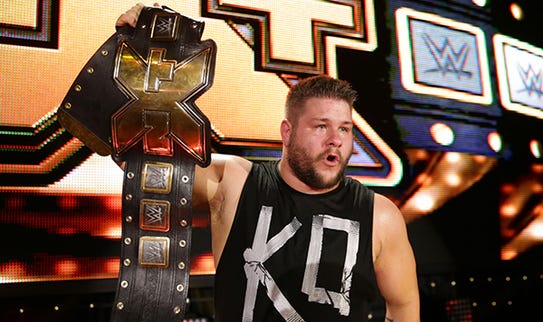 Finally got to watch last night’s NXT Takeover, and once again it delivered. Every match was good, the story lines are all simple enough to follow but deep enough to keep you interested, and on top of that, they all make sense. They are all believable. And the matches themselves are all great. It is crazy how much better NXT is than WWE.

(I decided to say fuck you to everyone who bitches about wrestling blogs and just write this one for people who watch. Because I don’t read Game of Thrones blogs because I don’t watch the show, why would people who don’t watch wrestling read this one? That would just be a stupid waste of time. But I’ll explain it a tiny bit here because there are those who don’t watch but are intestered– NXT is the “minor leagues”, or developmental as they call it. It’s where the younger wrestlers train and work their way up to the main roster. They do a show once a week on the WWE Network.)

But the problem that has occurred, if you want to call it a problem, is the talent in NXT is rapidly approaching, if not matching, the talent of the main roster that you see on Raw and Smackdown. The writing is exponentially better. The characters are more charismatic, work harder, and put on better matches. The crowds are louder. Just all around, it’s a much, much better product. Some of it has to do with quality>quantity. WWE Raw has to put on a 3 hour show every Monday for Raw and then a 2 hour show for Smackdown to be shown on Thursday. That’s a lot of programming to fill, while NXT is once a week. So I will cut the main product a little slack there, but it doesn’t make up for the terrible writing. The fact Kane and the Big Show are STILLLLLL tied and intertwined in main even story lines is blasphemous. Like…it doesn’t make sense. They are wondering why ratings are down and they want to blame it on Rollins being champion. HAH, come on. Get fucking real. It’s because they way they write these story lines are so boring and mundane. Rollins is a great heel. Ambrose is so over. But they keep holding these guys back. We survived the “great Reigns push of 2015″ and it looks like they learned a little from that disaster, but will Reigns be able to recover? Probably not, because they had a tremendous chance to make him a huge, deadly heel and they didn’t take it. Would have been incredible, and they didn’t take that opportunity.

What worries me is there is so much talent in NXT and only so much space up in WWE. Fuck, Bray Wyatt might be the most talented all-around guy they have up there and they keep on burying him. Neville made the leap to the main roster and who knows what they are going to do with him, it’s a legit concern they are going to ruin him. Bo Dallas is fantastic on the mic and he got buried (and The New Day stole his entire gimmick).

Which brings me to Kevin Owens. He has to, 100000% has to go over Cena. They have to build him up Lesnar-esque, because Lesnar will only be around so much longer wrestling 4 times a year. Build Owens to be that guy. If he loses to Cena at Elimination Chamber, what’s the point? What’s the point of continually to feed the young guys to Cena? If he loses at EC, the best hope is he beats him at Summer Slam and holds the NXT Championship and US Title at the same time. Would sell WWE Network subs and really build him up as the dominate force. Maybe then he beats Lesnar at Mania…I don’t know, just typing here.

And one last thing. The women’s matches last night. GOOD LORD THEY WERE GOOD. I can’t believe how good the NXT women are. The “Divas” of WWE should all be fired outside of a few. I can’t imagine in 100 years being impressed with a match between Divas the same way I was by both women’s matches last night, especially the Sasha Banks vs Becky Lynch match. Becky Lynch, so hot. Want to touch the heiny. And can wrestle her ass off too. Charlotte is incredible too. They all were, really. And Alexis Bliss has a shit ton of potential and is a rocket as well. What a job they’ve done with the women of NXT. Just thinking about the Bellas doing something like that makes me laugh.

So much potential and talent down in NXT. HHH has done such a phenomenal job. Didn’t even mention Enzo and Big Cass who are fantastic as well. Didn’t even mention Sami Zayn, who is America’s sweetheart. Real Talk: I’ve said it before, I just can’t get into him. But I do love Finn Balor more than anything. His entrance last night was a solid 12/10. Where are they going to fit all these guys on the “main roster”? They are all championship material. And nobody wants them called up to Raw only for them to toil away in the midcard. It’s so tricky, especially when NXT is so much better than the big leagues, you don’t want to see them called up anyway. If you’re on the fence about the WWE Network, it’s well worth the price of only $9.99 a month for NXT. Plus of course you get the WWE PPVs as well where you might see a good match or 2.