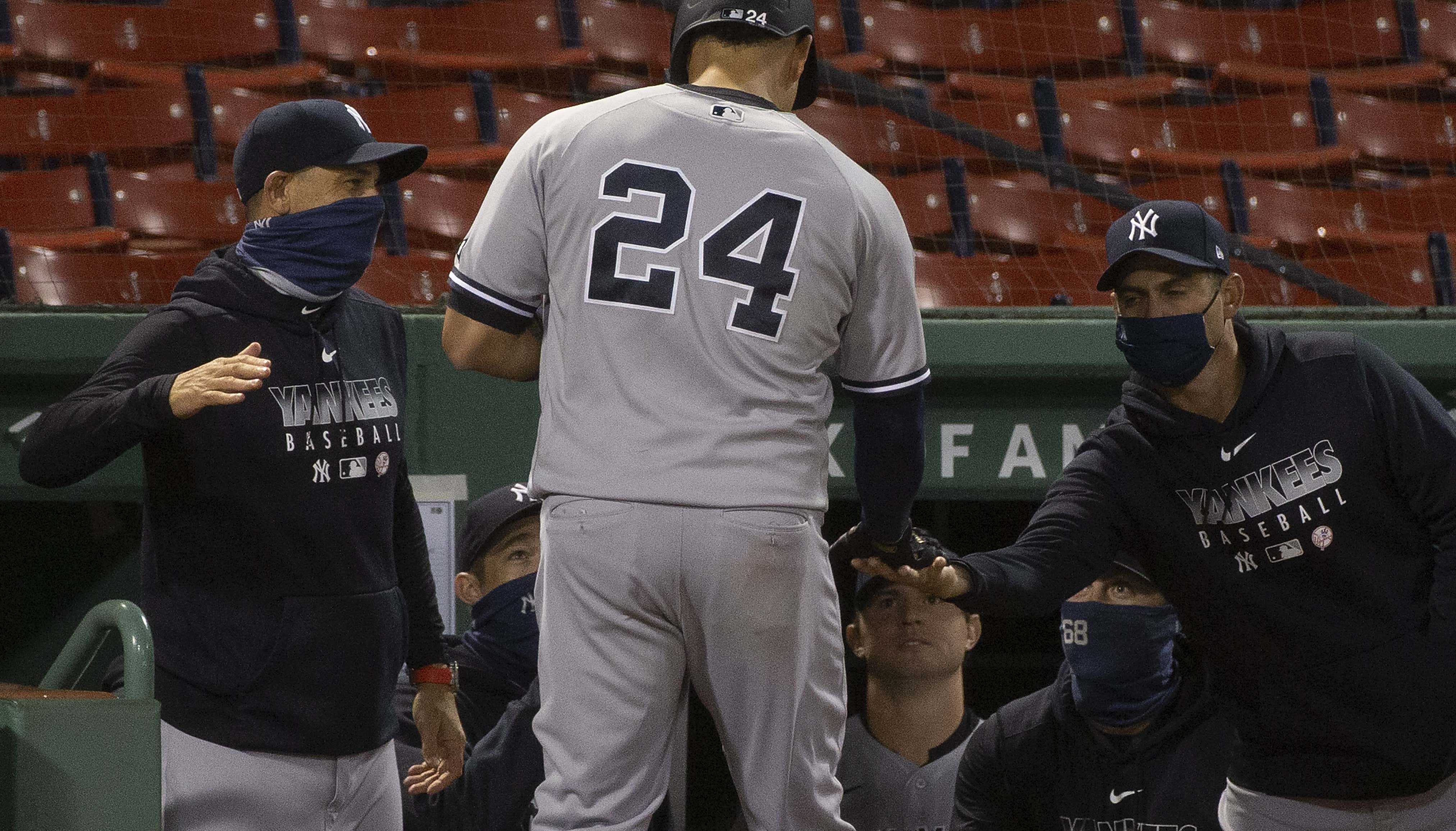 I really have no clue how the Yankees won that game Friday night. Zip. Zero. They should have lost a million times before Gleyber Torres tossed over the final out to first, but a win is a win, especially this late in the season. These kind of wins make or break seasons. Toss out the fact that it's against the pathetic excuse of a baseball known as the Boston Red Sox. You win a game after all of that bullshit and extend your winning streak to 9 games, that does wonders for confidence and morale moving forward. They always say it's hard beating a team eight times in a row after all.

The Yanks entered the top of the 7th inning trailing 4-0. At some point they were bound to lay an egg after looking like this immortal bunch for eight games. Whatever, take the loss, win on Saturday, move on. A few weeks ago a four run deficit that late felt like 15. With the way these guys are playing now, four felt completely do-able. How about a rally?

A single and two walks loaded the bases with two outs for Gary Sanchez. Over his last three games coming into Friday Gary had looked different at the plate. He wasn't chasing as much, was working counts, and even getting some "A" swings off. Obviously three games is not a big sample size whatsoever, but it was the best he's looked all year no doubt.

With a 2-2 count Gary took an outside fastball the other way for a massive two out, two run double. The Yankees had life.

After grabbing another run back in the 8th thanks to a Giancarlo RBI double, the Yankees headed into the 9th trailing by just one against Matt Barnes. Hicks and Urshela were immediately retired leaving it up to Gary again. The Kraken took one for a ride.

So…is Gary Sanchez back? .307 3 HR, 9 RBIs over his last 7 games. A wise man once said just make contact and good things will happen. The man's confidence is returning at just the right time. I still want Higgy catching Gerrit Cole, but it's nice to see Gary turning it on when it counts. Get him hitting out of the 8 hole with this lineup and you have no shot to beat this team in October.

Chad Green worked a clean bottom of the 9th and set the table for the top of the order to bring us home in the 10th. In shocking fashion DJ, Judge, and Tauchman (pinch ran earlier for Stanton) went down 1-2-3, stranding the go ahead runner on 2nd. There is no more demoralizing feeling than scoring zero runs in this new extra innings format. You instantly assume game over. Especially top of the order like what the fuck man. All that work to tie it for nothing? To make matters worse Aroldis Chapman entered the bottom of the 10th with not a drop of sweat on his body. Immediate red flag. That man needs to have water pouring down his face for me to know he's going to be lights out. His first pitch crossed the plate at 94 mph, and no it wasn't a slider. For about two batters the Yankees closer was topping out at 96 mph. Panic time. It got to a point where I didn't know what Gary should call to try and prevent the Sox from winning. Slider with no bite and a pedestrian fastball. Somehow some way Chapman reached back for 98 and was able to strike out JBJ and Chavis to escape trouble. One of the more confusing half innings I've ever watched. Again, no clue how the game didn't end there.

In the 11th, Luke Voit immediately delivered with a base hit through the left side scoring Tauchman. Unfortunately that's all the Yanks would get, allowing the Sox to tie it right back in the bottom of the inning off Johnny Lasagna. Boston then loaded the bases with just one out for JD Martinez. Any other year you can turn off the TV in this spot because JD was surely going to end it. But with the whole Astros scandal having happened, the Sox DH can't got to his video room to study pitchers anymore during the game. It's rendered him a below average hitter in the game of baseball. Something you just hate to see. The man is lost. Loasiga blew him away for the 2nd out before getting Vazquez to fly out to once again escape the end.

How this game was still going on at this point was besides me. After an Urshela single that couldn't score Hicks and two strikeouts from Gary and Frazier, that left it up to the MVP candidate DJ LeMahieu. Remember how I said this was a weird game? Well, to this point DJ was 0 for 4, which does not happen often. You can only keep LeMachine down for so long. With two outs DJ put the Yanks up for good.

Death. Taxes. DJLM with RISP. What a goddamn baseball player.

Loasiga worked a clean bottom of the 12th to record his first ever big league save and that was that. Piece of cake. He was fantastic, as was the rest of the Yankee bullpen. Combined, the efforts of Cessa, Otto, Britt, Green, Chapman, and Lasagna produced seven and a third of one unearned run ball. Montgomery wasn't great in this one, but was bailed out by the pen. During this winning streak they haven't been leaned on at all as the starting pitching has stepped up. It was nice to see the roles reversed for once.

I wanna bring up two plays real quick that helped win this game for the Yankees. The first is Aaron Hicks' laser to home in the 12th that kept Vazquez parked at 3rd.

Hicks has been a tad gun shy in 2020 as he's worked his way back from Tommy John surgery. This ball was thrown approximately 150 mph on a line to Gary. Big time throw.

The second play is Gary behind the plate in the 10th. Sox had 2nd and 3rd with two out for Chavis on a 2-2 count. Like I said Chapman was a mess with his velo in this one, and this time when he reached back for 98 it went sailing. Gary misses this ball and it's game over.

Huge play that will go unnoticed. Everyone will talk about the two run double and the 2 out game-tying homer, but that snag saved the game as well.

The Yankees have now leap frogged the Twins for the 4 seed in the American League. If the postseason started right now the Yankees would host the Twins at home for all three games of the Wild Card round. Once you get in the top 4 it really doesn't make a whole difference where you end up. Once the first round is over you're in a bubble on the road.

9 in a row now, how about we make it 10? Download the Barstool Sportsbook app here to ride the winning streak as JA Happ takes the ball.