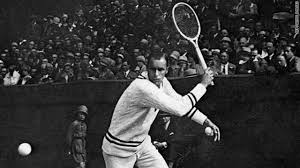 William Tatem Tilden II was born in Germantown, Pennsylvania, on February 10, 1893. Born into wealth, Tilden was encouraged to play tennis by his aunt. Bill Tilden learned to play tennis while at his family’s home in the Catskills. Tilden moved in with his aunt after the death of his mother. Over a few years, Bill Tilden had to deal with the death of both parents and his older brother. Coping with depression, Tilden turned his focus on his tennis career.

As the 1920s began, tennis was a sport of the rich as the best players were amateurs who had the time and wealth to play without earning any prize money.  After turning 21, Tilden, who attended the Pierce School of Business, began to rise in the tennis rankings; a strong doubles player won two doubles titles at the U.S. Nationals in 1913 and 1914. Meanwhile, he won the Philadelphia singles title four consecutive years from 1914-1917.

After World War I, Bill Tilden played in his first Wimbledon, winning consecutive titles in 1920 and 1921. It was the first time he had played at the All-England Lawn and Tennis Club. After losing in the finals of the U.S. National, Tilden, who became the number one player in the world, won his first of six straight titles at Forest Hills in 1920, beating Bill Johnston in five sets (6-1, 1-6, 7-5, 5-7, 6-3). Later in the year, he helped the United States reclaim the Davis Cup from France.

In the roaring ’20s, Bill Tilden was one of the biggest stars in the world of sports as his six straight U.S. National titles helped make him the first real American tennis star. He added a seventh U.S. National Championship in 1929 and won a third Wimbledon in 1930, becoming the first tennis star to win ten Grand Slam events. The depression forced Bill Tilden to turn professional in 1931, as he won the U.S. Professional Championship twice and the French Pro once.