We've seen how intense and divisive the issue of mask-wearing and social distancing has become in society — there are fights and freakouts going viral daily. But those are all matters of principle — add something like KFC mashed potatoes to the conversation, and that's when the knives start coming out. Literally. Like this girl was literally threatening to stab a motherfucker for not getting her some mashed potatoes. (At least that's what the NY Post told me I couldn't really understand a word she said.)

At one point, she also told a worker “she wanted some mashed potatoes and gravy or he was going to get stabbed,” a witness, Leah Chastain, wrote on TikTok.

We could have been treated to our first ever live stabbing...

If only the KFC employee gave any sort of fuck whatsoever about what was going on. I mean my dude could not have been more "mildly inconvenienced" by this potentially-knife wielding maskless psycho. His only response was the familiar "two hands in the pockets, slump the shoulders," the universal white dude sign of "ah jeez come on not again." 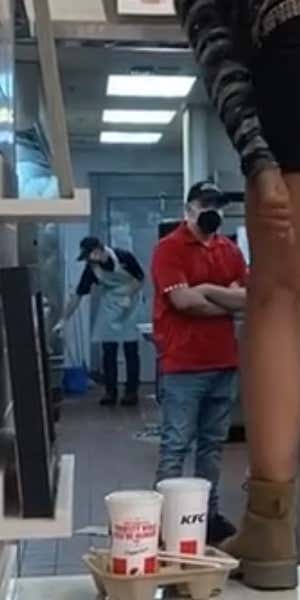 This is a man who has no interest in your political debates unless it's the one about fast food restaurants' wages. If you're not trying to give him $15+ an hour please let him put the buckets and fill-ups together while fantasizing about kicking the shit out of his manager like every other day in peace.