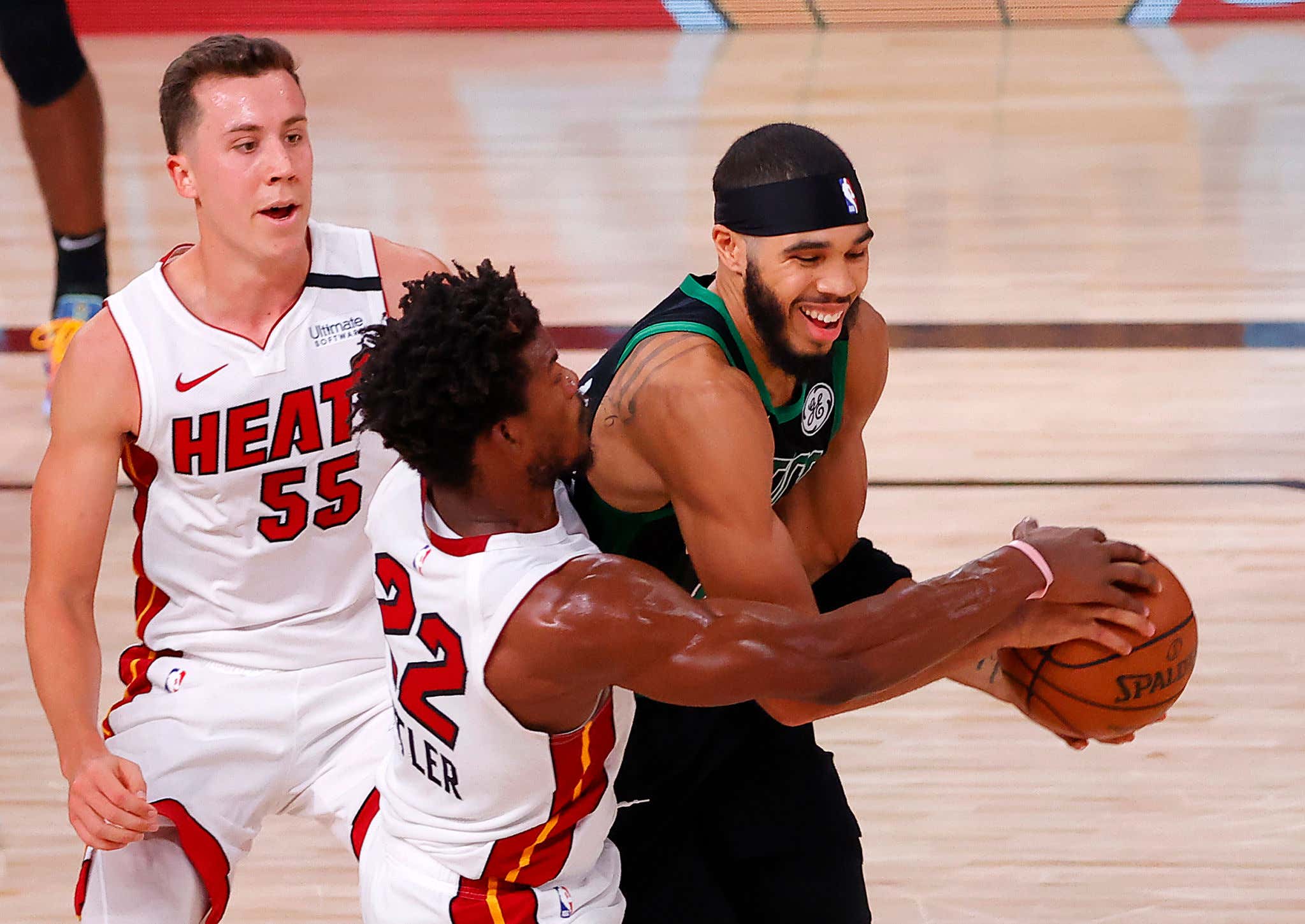 Serious question. Do the Celtics know that if you win the ECF you go to the NBA Finals and compete for an NBA Championship? Because through two games and two heartbreaking and frustrating losses I'm not so sure. This does not look like a team that is making the most of their opportunities and frankly I don't understand it. I think everyone is a little emotional right now after watching this team blow a 17 point lead, most people want to just put this all on Brad and demand he be fired. I'm somewhere in between. Brad has had an awful series up until this point, there is no denying that. But he can only do so much. It's on the players to not play like assholes and choke these big leads away. To play hard and play smart and not careless and lifeless. That's my biggest takeaway from these first two games. The Celts saw their leads start to evaporate and they panicked. They stopped playing. They played with no heart and energy. I'm sorry but that aspect is not on Brad. The strategy, adjustments, Xs and Os, that's all Brad. But that's also not entirely why this team lost last night.

It really reminded me of that "woe is me" mentality we saw during their struggles last season. The second things started to go south, this team didn't respond. Look at the Heat. Did they panic or anything like that when they got down early? No. They fought. They played smart. They played tough. Is that Erik Spoelstra or the players? It's not like this team is full of guys with inexperience. Smart is in his 6th year, Jaylen in his 4th, Tatum in his 3rd. Kemba is a vet. There is no excuse for them to shit their pants like this. They've been in playoff battles before (outside of Kemba). But their response to adversity has been pathetic so far this series and honestly it dates back to the Toronto series.

We have a lot to get to so we may as well dive in. Remember, we do not run from the pain in this blog. We don't only blog wins and when things are going well. We blog it, we read it, we digest it, and we move on.

- No fucking chance. Even on a night when Kemba snapped out of his offensive slump, we're not even going to look at the highlights. Someone has to hold this goddamn team accountable for their pathetic performances and if that has to be me then so be it. You want a good section and awesome highlights? Don't blow a fucking 17 point lead. Period.

- Where do we even begin. Let's start at the head of the snake, Brad Stevens. He seems to be the #1 problem on most people's mind so let's address it now.

Uhhhhhhh it absolutely is about zones and defenses Brad. It's the biggest reason you are in the 0-2 hole. Brad did make the adjustment and put Smart on the FT line in the fourth quarter, but by then it was too late. I think it's safe to say that through two games he has not done a good job of in game adjustments. Spoelstra has and that's why he's up 2-0. In this regard, Brad deserves all the blame in the world. It's on him to figure out how to adjust on the fly and put his team in a position to win. That hasn't happened.

- But it's also on the players to execute. The biggest issue in Game 2 was turnovers. Not being able to break the zone is one thing, but turning it over 20 times is on the players. Jayson Tatum and Kemba Walker combined for 10 TOs. The Heat as a team had 9. Those 20 turnovers led to 26 Heat points. There's your game right there. Smart even had 4 himself. When your three most important players are that careless with the ball, what exactly can the coach do? Even in huge moments they still couldn't stop turning it over. They couldn't even inbound the basketball! One turnover came inbounding under their own basket, and then the disasters in the final minutes. I'm sorry but that is beyond pathetic.

- It's also on the players to recognize when they are in the bonus and act accordingly. They announce it over the PA system, it's on the scoreboard, everyone and their mother knew that with 8:31 left in the fourth quarter the Celts were in the bonus. You only take 2 FTs the rest of the way? What the fuck is that? Where is the aggressive mentality? I'm to believe the players would only drive to the basket if Brad told them to? Fuck that, don't let them off the hook like that. These are veteran NBA players we're talking about here and to only get to the line once in the final 8 minutes is inexcusable.

- I know we joke, but the War On Theis is real. Not even close to why they lost but still comical that he couldn't even get this call

They really got Rondo'd again! Remember when Wade hit him in the head and it wasn't called? Incredible it happened again.

- When I talk about how this team played with no heart and no energy, this pretty much sums it up

One of the biggest possessions of the night and not one person jumps for the rebound? Again, that's on the players. How do you even defend this?

- One more point about their struggles with the zone. It's pretty clear that this team needs to be much better at making quicker decisions. Too many times we saw Tatum get the ball on the wing and hold it for way too long. It wasn't so much an iso issue as it was players holding onto the ball for too long.

- I'm a little confused as to what happened on that Crowder 4 point play. It was very clear that Smart was calling timeout when the Celts had possession, yet they called a jump ball. That would tells me the refs thought that there was no possession. But then the shot clock reset, which implies that there was possession. If that's the case, how do you not reward the timeout?

There was another shot clock fuck up on the dagger Olynyk bank three. An air ball somehow initiated a shot clock reset which allowed the Heat to set their offense and get a good look. Had that not happened, it's probably a shot clock violation. That's some shit that can't really happen.

- Speaking of things that can't happen, ESPN can fuck right off with this terrible sideline camera angle. Who is deciding this is a good idea? You can't see ANYTHING. I know this shouldn't bother me but christ is it so annoying.

- OK, let's talk about where this game was lost. You guessed it, the third quarter. A 12 minute span that has plagued this team the entire postseason, here's how things shook out

What even is that? Once again the Celts just stopped playing. It became clear that they had issues with guarding the P&R, there was no weakside help and Bam feasted. But they also couldn't stop fouling and turning it over. I'll say it for the millionth time, that's on the players. I wanted to see how Brad handled giving up this lead as we know he is slow to call timeouts. This is what I found.

With the lead cut from 15 to 10, Brad took a timeout at 8:17. Immediately after that timeout Kemba had a turnover which was followed by a Tatum turnover. The lead was cut to 8. A few minutes later after a Daniel Theis turnover, Jae Crowder hit a three to make it a 7 point game. Theis then missed a layup and after a Bam dunk Brad took another timeout at 5:11 with the lead down to 4.

Immediately after that timeout, Marcus Smart had another turnover which led to another Bam dunk, lead down to 1. So here's the thing. Brad did everything you would want to stop the run. He called his timeouts. But when you come out of those timeouts and immediately turn the ball over, what do you think is going to happen? This was about not being able to execute in the biggest moments.

- Which brings me to clutch time. There is no denying that these two teams could not be more far apart when it comes to clutch time basketball. The Heat thrive in these moments and the Celts do shit like this

For me, this is where Brad is coming up short. There is no offensive strategy late in these games. This isn't a new problem, the same shit happened against the Raptors and it happened in Game 1.

But I'm also looking at the leaders of this team. Where is Tatum/Kemba when they need someone to step up? The Heat have that with Jimmy Butler and the Celts are not getting the same from their star players. Where is the guy who says "you know what? I am making sure we don't lose this game". It's not happening. Tatum took ONE shot in the fourth quarter despite playing all 12 minutes. That is inexcusable.

- The body language of this team is concerning. Jaylen looks frustrated that he keeps not getting the ball despite being wide open int he corner, Tatum's body language looks terrible, that's all stuff that cannot happen.

So look, the Celts now face a big time uphill battle to get back into this series. They have no one to blame but themselves though. Gordon should be back tomorrow which hopefully helps solve some of their zone issues, but none of it will matter if this team collectively keeps playing like assholes. A team that has built their identity on playing hard and with great energy has done the exact opposite in the biggest moments of this season. It truly is embarrassing to watch.