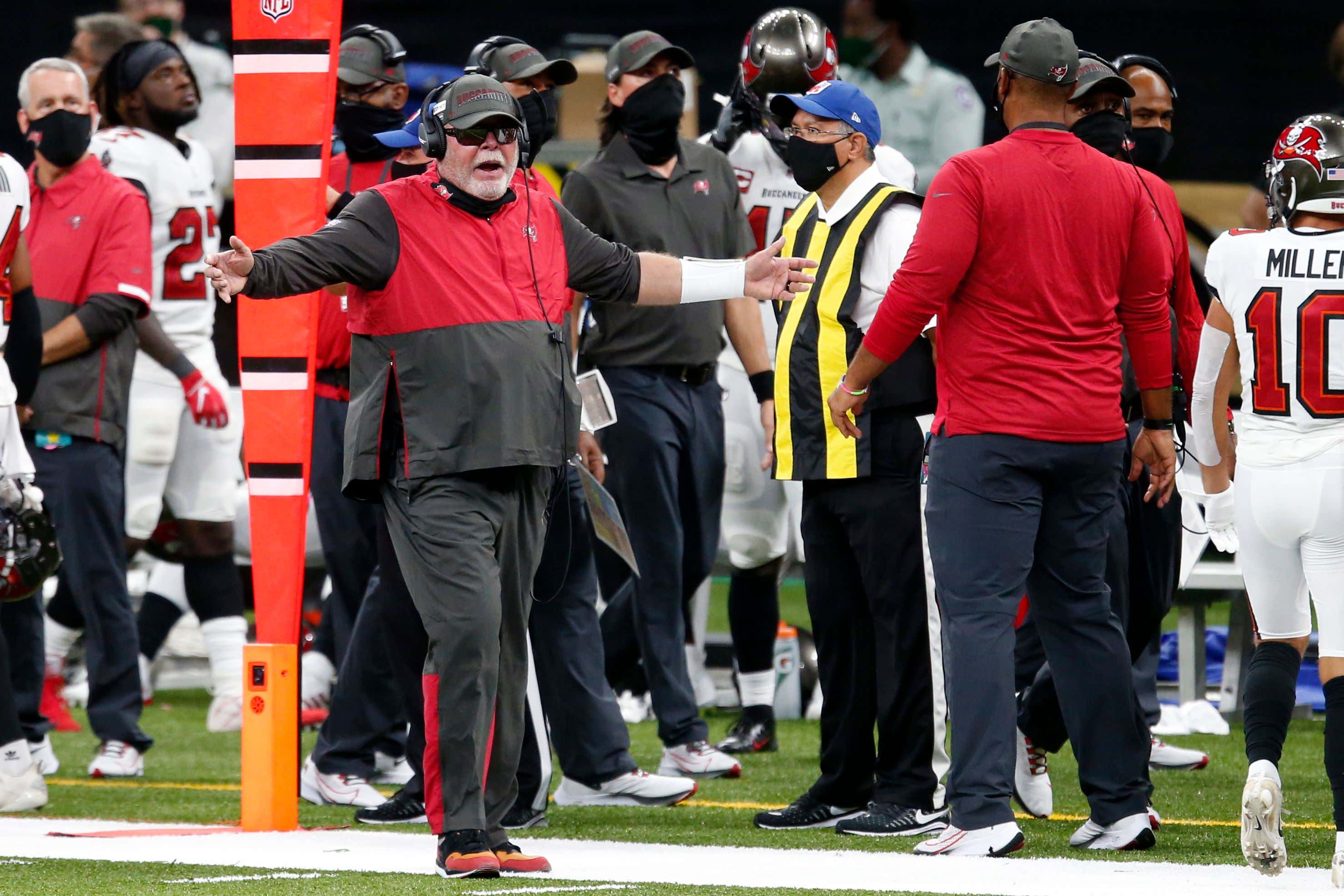 What a week Bruce Arians is having. For years the Quarterback Whisperer has longed to be whispering into perfectly sculpted ears like the ones directly connected to the high-functioning brain of Tom Brady. And now that his wish has been granted, he doesn't seem to know how to handle it. He's like Eddie Murphy in "Trading Places" when he went from begging in the streets to throwing parties in a lavish Manhattan town house, but just ended up getting pissed off at his guests for messing up his expensive things.

First he publicly interception-shamed his new QB. Then he questioned his "grit."

Since then he's thrown Rob Gronkowski onto the bonfire of his own vanity:

Only to now start backpedaling faster than he could ever hope to see Jordan Whitehead or Carlton Davis do in coverage. While defending himself against criticism directed at him coming from Brett Favre:

NY Post - “One [interception] was a miscommunication between he and Mike,” Arians told reporters following the loss. “He thought Mike was going down the middle — it was a different coverage — Mike [Evans] read it right. He should have been across his face, but Tom overthrew it.

“The other one was a screen pass with an outlet called. He threw the outlet and it was a pick-six. Bad decision.”

Arians later corrected himself, saying Evans was at fault for the first interception, but former Packers star Brett Favre cautioned Arians against hanging Brady out to dry the next day.

“I think the last person you want to call out after the first game of the year is Tom Brady,” Favre said Tuesday on SiriusXM NFL Radio. “Now, maybe they had a mutual truce going into the game, going into the season, ‘Hey, I’m going to be hard on you. I want the guys to know we’re going to treat you the same even though technically I’m not, so are you OK with it?’ If they have that truce, great. If not, I think you are barking up the wrong tree.

“Bruce Arians is the head coach, he’s gonna do it the way he wants to do it — and I’m not saying that it’s right or wrong — but what’s happened in New England for so many years is that it worked,” Favre said.

I'll interject here to correct the Ol' Mississippi Riverboat Gambler Who Jus' Loves to Play Football and Would Play for Free, but that is NOT what happened in New England. Not for so many years. Not once. I defy the Guy Who's Not Jus' a Quarterback, He's a Football Player, to cite just one example where Bill Belichick publicly pinned the blame for a play on any one individual. Actually, I'll take that back. Let me save The Gunslinger some time by saying definitively, it never happened one time in 20 years.

But his larger point is well taken. If he and Brady worked out some sort of arrangement ahead of time where he gets to verbally dope slap the best player in league history around to gain points with the rest of his roster, fine. But how likely does that seem? Especially if you give any credence to the reports that Brady was sick of having his performances picked apart in team meetings or that his wife went to ownership to complain he was being talked about like he's "Johnny Fucking Foxboro." We did hear Gisele say on camera that he "just wants to go to work and feel appreciated" in the "Tom vs. Time" documentary his own company produced.

And as far as Gronk, we heard repeatedly that he resented being singled out in practice in front of his whole team. So for Bruce Arians to think nothing of pinning a loss on his QB and pointing to the inadequacies of his new tight end's blocking is a bold strategy indeed.

But here was Arians' response to the reaction he's gotten:

“Tom and I are fine. … I don’t really care what other people think. So it’s just what he and I think. We left the stadium fine. We showed up today fine. There ain’t nothin’ to talk about.”

Sure thing. But we'll see about that. It strains credulity that two best players ever at their positions who could've chosen to go to a lot of franchises would've picked Tampa if they'd known they'd be scapeGOATed the first time a game didn't come together. Not if we believe that the reason they wanted out of Foxboro most was because they were fed up with getting harped on behind closed doors. Even while being defended in public.

Bruce Arians has 58 career wins and one in the postseason. Belichick has 273 and 31, with a boat named VIII Rings. It's going to be interesting to see how "fine" he and his two new superstars are when he starts out their relationship by giving them more crap in public after one game than their Hall of Fame coach did in two decades. Stay tuned.