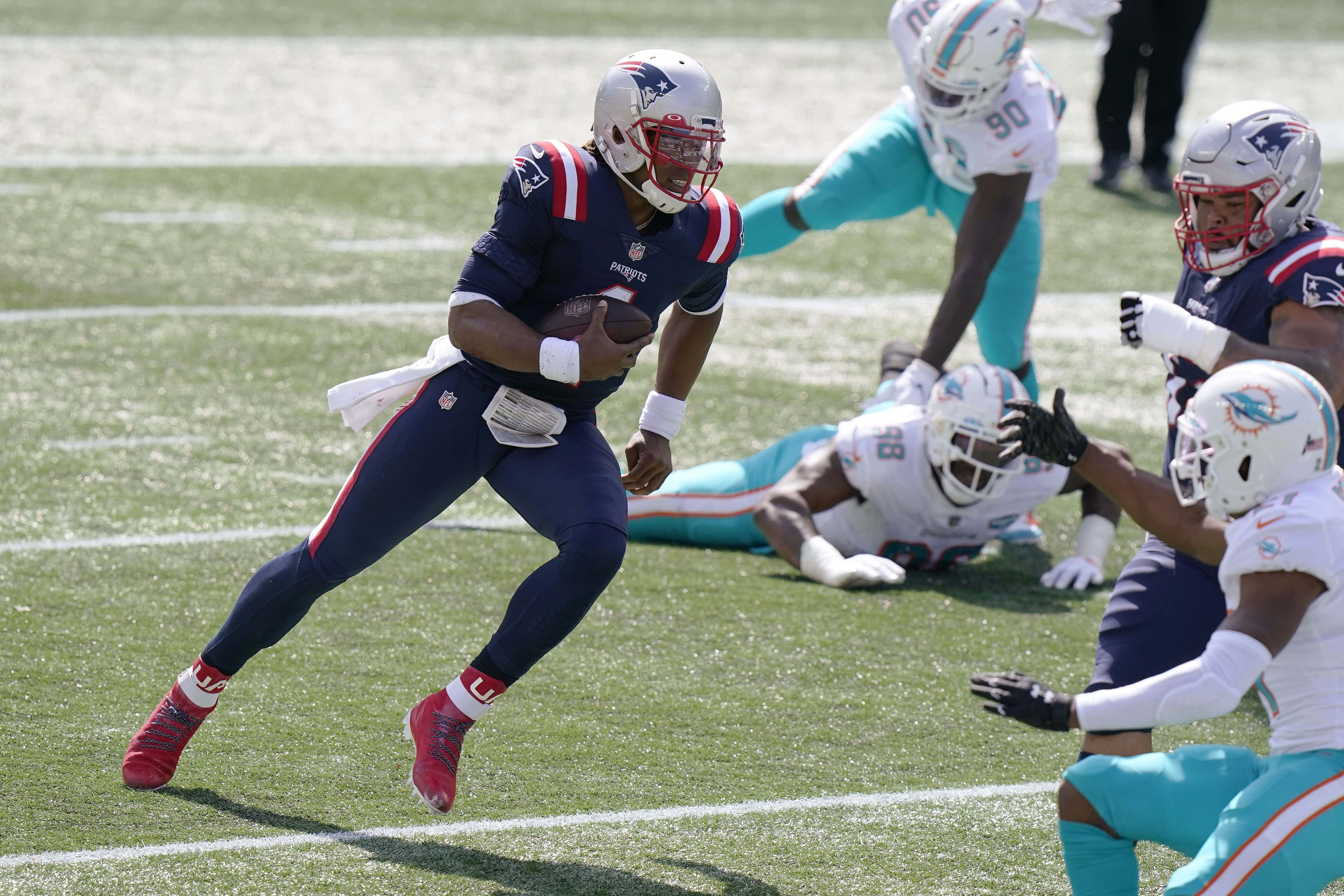 New England can be forgiven if we're a little unclear on the concept of this whole "running quarterback" thing. When your previous quarterback took 18 years to gain 1,000 yards on the ground and the guy he replaced was as mobile as a Dalek, then that makes almost 30 years worth of watching quarterbacks keep the football only on short yardage dives and complete breakdowns. So this is all a new experience to us. And I for one am not sure how it's all supposed to work.

Cam Newton had 15 rushing attempts Sunday against the Dolphins. I have to plead ignorance because I have no perspective on whether or not that is a lot. But a little research tells me that yup. That is a fuckton of carries for a quarterback. Of any era.

I don't know if it's a team record, but I assume it is. In my lifetime, the two best running QBs the Patriots have had (make that the only two) were Steve Grogan and Doug Flutie. Grogan played 149 games and only broke double digits in attempts twice, with a career high of 12. Flutie maxed out at 11.

As a matter of fact, Newton himself has only had more than 15 carriers once with 17, and that was in an overtime tie against Cincinnati in 2014.

Doing the math, 15 carries per game over an entire season projects out to 240. By way perspective, only 14 running backs on 32 teams had more than that in 2019, and that's their full time occupation. The all time record for rushes by a QB is the 176 Lamar Jackson had last year, which shattered the previous NFL record of 147, set by Lamar Jackson the year before. That record is roughly half the "pace" that Newton is on after just one game. In fact, of the top 15 QB rushing attempts in a single season, Newton occupies five spots, and his career best is 139. So more than 100 ATTs than if he kept up the 15 per game total. Though I will add that in his 24 career starts so far, Jackson has topped 15 nine times, with a high of 26. But he's 23 and that seems like a young man's game to me.

So the answer to whether we'll see this every week is not just "no," unless you go on to add, "… way in hell."

But still, I don't think we've seen the last of Newton keeping the ball so often. It's going to be gameplan-specific. Credit to Mike Reiss with the Josh McDaniels perspective and the advanced metrics on what we witnessed Sunday:

"No," McDaniels countered. "Really, it's more of a function of what is best to do against a specific opponent that we were playing." …

Newton's legs were a big part of that in Week 1, and his speed sparks optimism in New England:

McDaniels pointed out that if read-option plays had gone to the running back -- a decision primarily dictated by the reaction of the defense -- Newton's rushing attempts could have been limited to as few as six.

As far as the obvious injury concern, of course it's a factor. But consider this. According to Pro Football Reference's box score, Newton averaged 3.8 yards before contact. For perspective on that, by their 2019 stats, that would've been good for second in the entire league last year, behind only Jackson's 4.9. A veteran like Newton, who's tucked and run with the ball more than any QB in league history (949 to Michael Vick's 873), certainly has enough flight hours to know when to take the four yards he's been given and get into a slide and when to fight for the 1st down or the end zone.

As far as gameplanning for the opponent, if you look at Seattle this week, they have one linebacker more or less Newton's size, and that's KJ Wright, at 6-4, 246 lbs. I've mentioned before that Nick Saban has predicted eventually some team is going to see so many defenses going small and to combat spread offenses and counter them with a power run game knowing they're not physically capable of stopping them. That is for sure how Baltimore went 14-2 last season, with Jackson leading the way.

Between the Pats depth at running back, the return of 80% of their offensive line and Newton's unheard of combination of size, speed and now health, you can easily see more games like he had against Miami. At the very least, defenses having to key on him to free up his backs in the option game, as McDaniels talked about.

And the way I talked about, this is all still new to me. So bear with me as I feel my way along here. All I know for sure is that I'm really enjoying this new look so far.