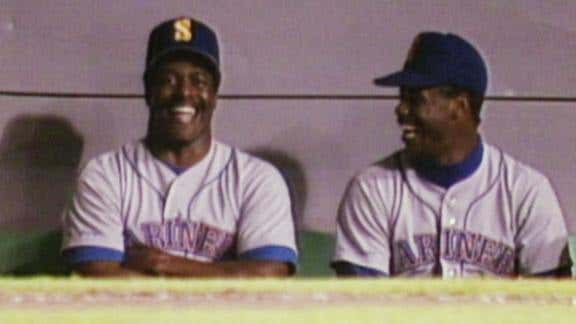 Two weeks after they played their first game together, Ken Griffey Sr. and Ken Griffey Jr. hit back-to-back home runs for the Seattle Mariners. The home runs come against Kirk McCaskill of the California Angels in the first inning at Anaheim Stadium. It would not be enough to help the Mariners win the game, as the Angels win 7-5.

Ken Griffey was born on April 10, 1950, in Donora, Pennsylvania, the same hometown as St. Louis Cardinals legend Stan Musial. Griffey was a multi-sport star; in 1969, he was drafted by the Cincinnati Reds. A few months later, on November 21, 1969, he became a father when Ken Griffey Jr. was born.

Ken Griffey made his debut with the Reds in 1973 and became a vital cog in the Big Red Machine that won back-to-back World Series in 1975 and 1976. Batting at the top of the lineup Griffey, scored more than 100 runs in 1976 and 1977, as he named to the All-Star team. Ken Griffey also was an All-Star in 1980, winning MVP honors at Dodger Stadium. After the 1981 season, he was traded to the New York Yankees. In New York, Griffey had five and half seasons of diminishing results before he was traded to the Atlanta Braves in 1986.

While Senior Griffey was on the move, his son was excelling in high school. In 1987 Ken Griffey Jr. was the first player taken over in the MLB draft by the Seattle Mariners. As Junior Griffey was starting his minor league career, his dad was winding down his major league career. In 1988, Ken Griffey Sr. returned to the Cincinnati Reds after he was released by the Braves. A year later, Junior Griffey made his debut with the Mariners and was in the running for Rookie of the Year, before sustaining a wrist injury.

Ken Griffey Jr. continued his meteoric rise to become a superstar in 1990, becoming an All-Star for the first time in his career. Back in Cincinnati, his father was struggling with a Reds team that was in first place. Batting .206 in August, the Reds gave him the option to retire or be released. After considering retirement, the 40-year-old former All-Star asked to be released when discussion about joining his son on the Mariners became a possibility.

Two teams out of the race played at Anaheim Stadium on a Friday Night. The Seattle Mariners entered with a 70-74 record seeking their first winning season with manager Rene Lachemann. The Angels, led by Doug Radar, entered the game at 73-71. Veteran Matt Young, amid another bad season, made the start for Seattle, while Kirk McCaskill made the start for California. The game got off to a great start for Seattle as Harold Reynolds reached on a leadoff walk. Ken Griffey Sr. followed with a home run. It was the third home run that Senior Griffey hit since joining the Mariners two weeks earlier. Ken Griffey Jr. followed and also hit a home run as the father and son made it 3-0 in favor of Seattle.

The Angels exploded for five runs in the third inning, with Dave Winfield providing the big blow with a three-run homer. In the seventh inning, the Mariners rallied against the Angels bullpen as both Reynolds and Senior Griffey had run-scoring hits. In the bottom of the seventh, Dave Winfield hit his second home run to give the Angels a 5-3 lead. Matt Young suffered his 15th loss of the season, as Bob McClure, who gave up the lead go the win, with Bryan Harvey recording the save.

Ken Griffey Sr. would not hit another home run in 1990 and had just one dinger in 1991 before ending his career at the end of May.