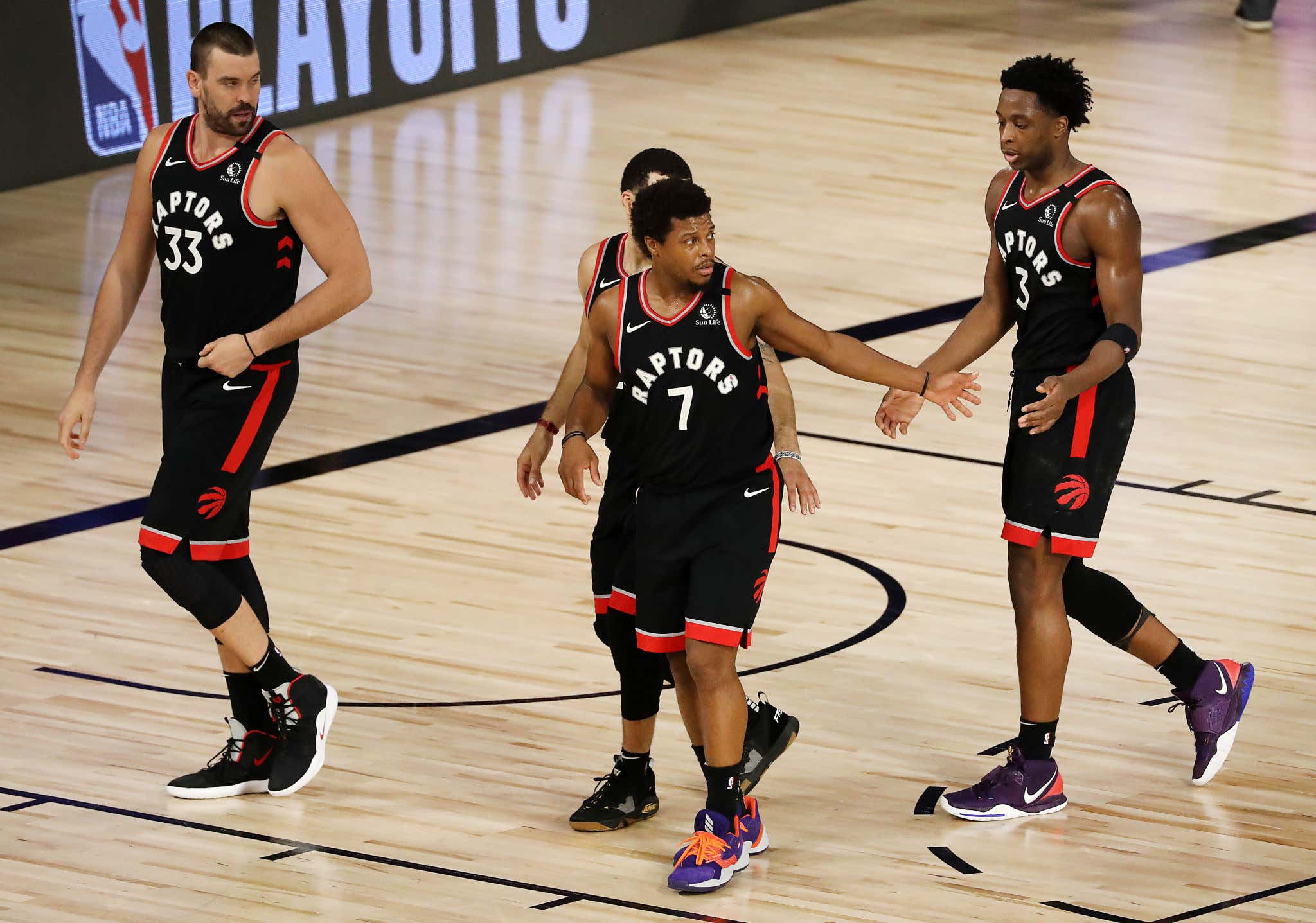 Good morning everybody happy Thursday and welcome back to another edition of Last Night In The NBA where we bring you up to up to speed on everything that went down from the night before in the Association. Just like we expected it was another wild night of bubble playoff basketball, and frankly the fact that I'm even alive to type this blog is a miracle. Credit to me for showing up. If you have no idea what I'm talking about well, just keep reading because here's what happened.

What a series this has turned into. We'll talk about the Celts in their normal blog, so for this space let's give the Raptors their props. Holy shit will this team just not die. You knew they would give you a max effort in Game 6 with their season on the line, but this is getting a little ridiculous. First they win with a prayer shot with 0.5 on the clock. Then they come out and win a double OT thriller by 3 points by dropping 19 points in the 2OT? What the hell even is that. This was the most combined points scored in a double OT ever. A total of 35 points! It's pretty clear that to beat the champs you have to cut their head off. You give them any sort of life and they are going to make you pay, and that is exactly what the Celts have continued to do in this series. They are playing with their food.

You do that, and you give Kyle Lowry a chance to do more of this

he and Fred VanVleet were much better in this game, combining for 54 points including 9 3PM

FVV had his run in the third, and then Lowry kept making dagger three after dagger three in the fourth. Then he was able to use his size against Kemba for back breaking OT buckets. That has to be fixed for Game 7 if you're Brad. You have to give the Raptors credit though, they stepped up and made the shots they needed to make to keep their season alive. That's especially true when it came to the hero of the night, Normal Powell

and another back breaking, game deciding three from OG Anunoby with under a minute to go in the 2OT

And sure, the officiating was dogshit and highly questionable, Nick Nurse basically ran onto the court in the middle of a play, but the fact remains that the Raptors out executed the Celts down the stretch and that is why they won. They showed great poise and punched back every single time the Celts tried to make a run.

Now we have a Game 7 where truly anything can happen. None of the previous games matter, it's all about who plays better for that 48 minutes. I will say though it's pretty fucked up that the Celts keep finding ways to lose in gut wrenching fashion. Like what the hell is that.

Well, that's that. Not exactly the best situation in a game you need to have to essentially keep your season alive if you're the Nuggets to come out and score 12 points in the first quarter on 25/0% shooting. Because when you do that, you get down by 14 and then the game is over. This was a game that had 1 tie and 0 lead changes and the frustrating part has to be the fact that the Nuggets played the Clippers even the rest of the way. They were done in by a brutal first quarter and now their season is most likely. over.

and maybe he has a point to some degree. He did have 15 first half points only to get 2 FGA in the second half. You still don't do that shit in front of cameras though. In the end Jamal Murray still couldn't find his stroke going just 6-18, Jerami Grant missed almost every shot he took, just a rough night offensively to not even break 90 for a team that certainly knows how to score.

which was huge because Paul George came back down to earth with a 4-10 performance. Lou Will wasn't all that better at 3-11, but again the damage was done in the first quarter. The Clips didn't shoot all that well as a team but also didn't turn the ball over, and this is the type of ugly win you sometimes need to have. They won with their defense, and now I can't see them blowing their 3-1 lead which means our LAL/LAC matchup in the WCF is looking pretty damn good.

And that's it! You are now all caught up with everything that went down last night in the NBA. We're back tonight with only one game, but something tells me LAL/HOU is going to continue our trend of incredible games. Have a great Thursday!