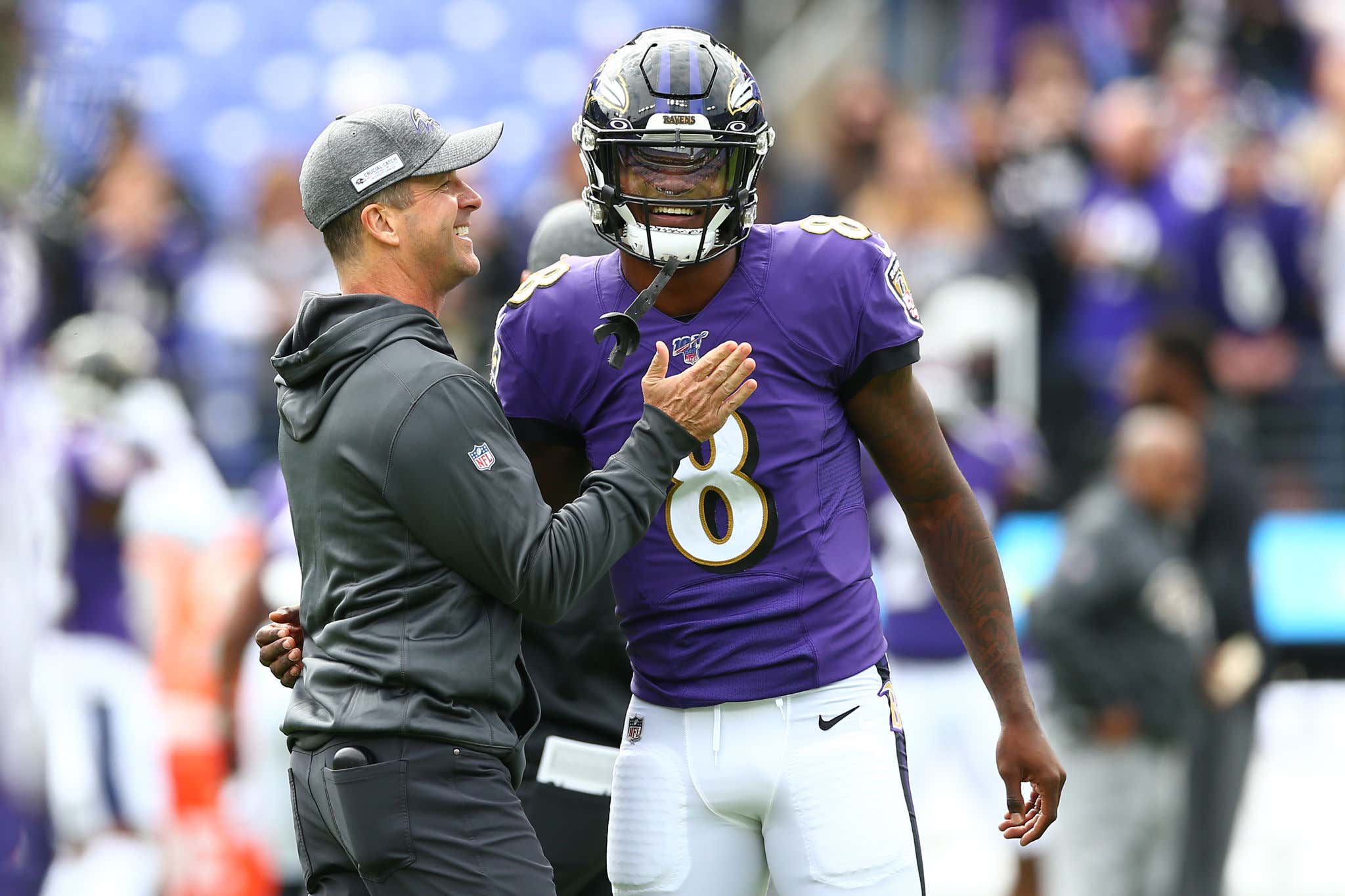 We finally made it. It feels strange as hell and doesn't feel at all like real NFL football is on our doorstep… but it's here nonetheless.

The 2019 season was easily the most fun I've had in my 6 seasons blogging the Ravens here at Barstool Sports dot com. The Ravens weren't just winning games - they were blowing the doors off of teams on a weekly basis. A franchise that I had grown up watching scratch out low-scoring wins more often than not was suddenly hanging crooked numbers at a near record-setting pace. It got to the point where we weren't counting down the days, but rather the weeks and months left until the playoffs started in Baltimore.

And then we all know what happened. It was over before it felt like it had even started. The Ravens hit some adversity early, compounded a few mistakes, caught a couple bad breaks, and then lost their way in their efforts to get back into the game. It left everyone here questioning everything that they had watched in the 3 months prior.

Well let me tell you this. One loss does not define Lamar Jackson or who this Baltimore Ravens football team is. While it will always be a painful memory and a lost opportunity, it is by no means an indicator of what's to come. If anything, it exposed a few weaknesses that that great football team had concealed for weeks. And let me assure you (as if a 14-2 record is not enough), that was a great football team. You don't accumulate the 6th best point differential in NFL history if you're not great.

So what have the Ravens done to address those weaknesses? And what are they up against as it relates to replicating the previous year's success?

First things first. The Ravens got absolutely gashed on the ground defensively. They just didn't have the bodies at the second level to deal with a menace of a running back like Derrick Henry. We all saw what happened. The loss of CJ Mosley and Terrell Suggs on the edge the previous offseason had been exposed by Nick Chubb and the Browns in week 4. From there, the organization did a phenomenal job finding guys like LJ Fort and Josh Bynes to be a band-aid for most of the year, and had the benefit of an offense that consistently put the opposition multiple scores behind. There were signs of those kinks in the armor in a couple of games throughout the year (the 49ers game with Raheem Mostert comes to mind), but the offense and special teams were able to make enough plays to pull out the W's in close games. Any team looking for a way to beat the Ravens were going to look at that as the formula to have a fighting chance, and it just so happened that the Titans had the personnel (i.e. manchild that is Derrick Henry) to execute it.

So what did Eric DeCosta do about it? Well, he basically revamped the front 7. He robbed the Jaguars blind of Calais Campbell for a 5th rounder and signed veteran Derek Wolfe from Denver. Both bring a much needed balance of run-stopping and pass-rush for a defense that needed a heavy dose of blitzes to consistently put pressure on the QB. Better yet, they bring more depth and versatility to the defensive line and allow Brandon Williams to play a bit more nose tackle, where he thrives.

Then, a stud by the name of Patrick Queen fell to the Ravens at the 28th overall pick. It's rare that the best player available is also your greatest position of need that far back in the 1st round. Queen is young and raw, but has all the talent in the world to be everything CJ Mosley was in Baltimore and then some. The Ravens were particularly exposed on stretch runs to the outside and Queen has the type of speed (along with Campbell's length on the edge) to combat that. Couple that pick with another inside linebacker by the name of Malik Harrison who can play a bit more in the box and suddenly you've got yourself a front 7 built to complement the best cornerback group in the league. Collectively they make up what should be a top 5 defense, and just might be the league's best when it's all said and done.

For the vast majority of the offseason, the one key departure appeared to only be Marshal Yanda. Those are pretty big shoes to fill in ways more than one. Yanda was the big bad bully on the block for over a decade and helped lead this otherwise young offensive line to the league's best rushing attack. Eric DeCosta has brought in a multitude of guys to compete for his spot at right guard and it's unclear as to who will start, but he's definitely given Coach Harbaugh options. DJ Fluker has had success in this league as a former first rounder and supposedly shed a whopping 22% of body fat.

Harbaugh has also been able to lean on a handful of guys who can play multiple positions on the interior OL. Matt Skura and Patrick Mekari both started games at center last season (with Skura tearing damn near every ligament in his knee and still being ready for camp this year), and both played well in that role and could slide over to right guard. But most intriguing is Tyre Phillips, the 3rd round pick out of Mississippi State. He mainly played tackle there, but rumor has it that he may actually be the starter at RG come Sunday. A rookie beating out that crop of proven guys is nothing short of impressive, and can only mean good things in the long run for Phillips and this offense.

The other big matzah ball is obviously Earl Thomas. I reported (first might I add) last month on just how toxic his presence had been leading up to the fight with Chuck Clark, and everything that came out through mainstream media spoke truth to that. The Ravens really did have no choice but to cut him in order to restore peace and preserve the culture in the locker room. Some players have danced around admitting as such, but a few haven't been so shy.

Regardless, it's up to DeShon Elliott to step up to the plate, and the organization has a ton of confidence in him. He has the benefit of playing center field behind an incredible group of cornerbacks, but offenses won't be shy about testing him. And based on the way the Ravens' offense puts points up on the board, they likely won't have a choice but to air it out. His back will be the one with a target on it, so we'll see what the kid is made of.

So with all that said, there's really not a lot of turnover in this organization from last year to this year. The Ravens are running it back. There's a ton of youth, so logic would dictate that this team should only get better. Which is really an absurd concept to try to wrap your head around. Lamar Jackson just had one of the all-time great offensive seasons in football history, and at age 23 he may just be scratching the surface. That's worthy of its own blog that I'll be writing shortly. But all the guys around him are also young and still improving. Hollywood Brown finally has two healthy feet and he's ready to break out in a big way. Mark Andrews and Orlando Brown are both going into their 3rd years. Miles Boykin is in his 2nd year and made a few red zone plays last year. All reports so far speak highly of Duvernay and Proche at receiver too.

It's all coming together for a team that has already shown it can be dominant in this league. So while it's a shame that the whole postseason failure thing will hang over their heads until they get a chance to prove themselves once again, I'm going to look on the bright side and enjoy the hell out of another 16 games and you should too. It's gonna be a lot of fun, so follow along on twitter and instagram @BarstoolBanks. And there may be some other content channels coming in the coming days so look out for that eyeball emojis.

Lamar Jackson and the new age Baltimore Ravens arrived last year. Now it's time to go get the big one in Tampa. In Lamar We Truzz.