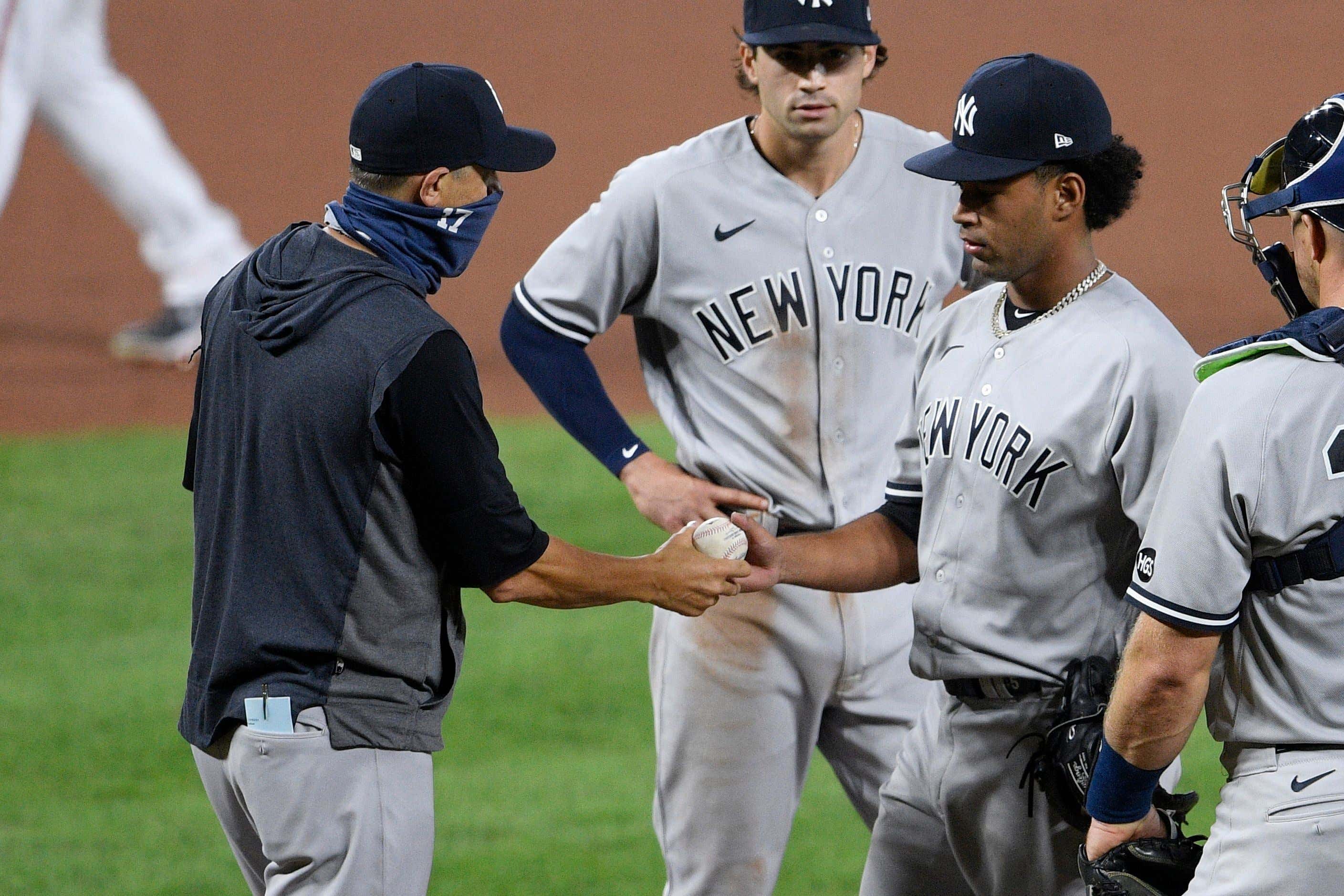 Sigh. Just one big sigh. That's all 2020 has fucking been so far for this Yankees team. They get Zack Britton and Higgy off the injured list and that's immediately welcomed with Gio Urshela going on the injured list with bone spurs in his elbow and Lasagna being sidelined with a medical condition that isn't covid. I mean you just have to laugh it off at this point.

Today the Yankees somehow pulled off a miracle and won game 1 of the doubleheader despite surrendering a 4-1 lead, not scoring in the first extra inning, and having Jonathan Holder, a pitcher, score the go ahead run in the 9th because the DH had been sacrificed the inning prior. The Yankees used six pitchers in the game after already having the pen run on fumes thanks to Jordan Montgomery's two out start a few days ago. In between games the Yankees called up their number one pitching prospect Clarke Schmidt. About fucking time! If this wasn't the time to call him up then it literally was not going to happen in 2020. Ben Heller was optioned and Schmidt was told to be ready out of the pen if Deivi needed help.

In his second MLB start Deivi Garcia was good, but the stat line won't show it. His pitch count did get the best of him in this one and prevented him from finishing the 5th. For the most part he worked in and out of trouble comfortably and showed some nasty stuff. 4.2 IP 5 hits 4 earned runs six strikeouts isn't great, but watch his start and he was totally fine. The ending just could have gone better. His only real blemish came on a Ryan Mountcastle bomb. To be honest the pitch wasn't all that bad, Mountcastle just got his hands in quick enough and turned on a running two seamer.

The bottom of the 5th inning is what everyone will talk about with this one. After retiring two of the first three hitters, Deivi gave up a single to left via Pedro Severino. With his pitch count at 95, Boone pulled the plug. In to relieve the rookie came Clarke Schmidt.

I HATED having Clarke make his debut here. Go figure I bitch and moan all season to get him called up and the moment he comes in a game I despise the move. I mean what the fuck was that putting him in that spot? First of all he's a starting pitcher so going in as a reliever is bullshit from the get go. Second, you're not even bringing him in for a clean inning. Two on, two out, one run game welcome to the show. As high leverage a situation as it gets. Unbelievably tough spot for the kid. I'm not making excuses for him and he won't either, but I mean anyone with common sense knows this isn't on him. In a perfect world you leave Deivi out there for one more batter and gets it done. His pitch count was high though and he was laboring. The move is to pull him, but for who? Cessa? Yajure? You have Schmidt there ready to rip, but it's such a shitty way to make your MLB debut. Fuck 2020.

So what happened? Three consecutive hits resulting in four runs coming across and the lead being surrendered.

Not great. Now to be fair to Clarke, the hardest hit ball of those three came at 93 mph. The other two, 81 and 75. It's not like he grabbed the ball and gave up 450 feet homer. He wasn't shelled by means. Dude just had some unlucky shit happen in an already impossible spot to make his debut. I wish he just struck out Mountcastle and cruised the next two innings, but hey this Yankees season is fucked and nothing goes the right way.

Just goes down as another tough loss in this miserable run the Yankees are on. The 19 game winning streak to Baltimore is over when it definitely should be 20. Everyday is another blow to our hearts. Cole gets the ball tomorrow. Please for the love of god pitch well. I'm begging you GC. Also Gleyber is back. Can't wait to find out who's gonna die for him to come up.