It's not really a surprise that Ja Morant won ROY. He was basically the wire to wire favorite and deserving winner. He had a monster rookie season and carried the Grizzlies to a record that was better than pretty much everyone predicted. Sure they sort of fell apart in the bubble and missed the playoffs but whatever, this is a regular season award. But that's not why I'm writing this blog. I'm writing my blog because of this 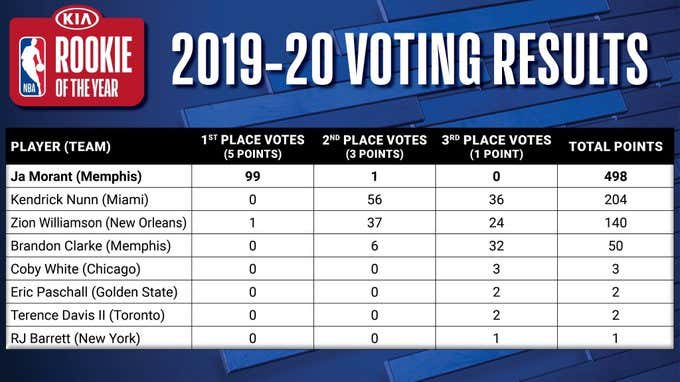 I'm sorry, but who the fuck voted for Zion? What an asssssssssssssshole. You know it's someone who just wanted to be a contrarian and look at the final votes and know they were the one person who didn't. I demand we expose who this was and shame them publicly.

You can think Zion had an impactful 19 games, but anyone with a brain knows he wasn't the rookie of the year and didn't deserve to be. How can someone look at that body of work and decide "yup, that was better than Ja Morant's season"? They can't. Which means this was not a real vote. I know this shouldn't bother me but I'm a little on edge at the moment. Like what's the difference if he got 99 of the 100 votes or 100 of the 100 votes, I get it. That still doesn't make it right. This is like when that person didn't vote for Shaq for MVP and he wasn't unanimous. Something that bothers him to this day

I need to know the reasoning behind that vote. Is it a Pelicans writer? Is it someone who is a "narrative based voter"? Because I'm sitting here trying to think of what the rationale might be and I just can't find it. That's why all these things need to be made public. Make people own up to their votes and have to defend themselves for pulling shit like this.

A dude that ended up being 3rd in the voting got a first place vote. We all know that Zion is the future of the league and blah blah blah, but come on, that's just embarrassing.