Nobody in the NBA has been more vocal as a black athlete about current events surrounding the Black Lives Matter movement than Kyrie Irving. I mean, homie PRESSED for the NBA to cancel the season to focus on the “movement.”

His teammate Kevin Durant has only been slightly less active, telling the Undefeated in a recent article that, “all we wanted is to see justice for George Floyd and others wrongfully done by the police. But also have a conversation shaping hearts and minds about black people in general. The conversation is moving in a direction of hopefully seeing change.” This is a man on a MISSION.

Which is why it should surprise no one, absolutely no one, that the Brooklyn Nets hired (checks notes) ... Steve Nash, a former Canadian hockey player and current part-time soccer commenter, as their new head coach.

Of course Nash is a hall-of-fame NBA guard but he’s also a white player with ZERO experience coaching in the NBA. He’s never been a head coach, he’s never even been an ASSISTANT coach. The closest he came was consulting for the Golden State Warriors where he was, as KD put it, like Yoda.

YODA? You cannot make this shit up.

How we got to the point where the NBA team that is probably the most BLM in the league ended up with the whitest coach since Fredrick Kristian Hoiberg needs to be dissected like Charlie from Always Sunny breaking down Pepe Silvia.

Let’s look at those Brooklyn Nets first. The Nets nearly murdered my soul by shooting 97.7% against the Blazers in the final bubble game until Dame Time saved the day.

I was so impressed by this collection of misfits that I bet the Nets +1200 on a first round upset of the Raptors in the NBA playoffs. Hahahaha.

Of course, the Nets are more than just Kyrie and KD; they just happen to be arguably the most active team in the league on issues of race. The organization was one of the first to issue a statement after the death of George Floyd, and almost every player -- from Wilson Chandler to Chris Chiozza (who?) -- weighed in on the issue, defending the backlash against Kyrie and decrying police brutality.

In fact, the Nets had 21 players on their roster this year and just three were white (only one born in America). That 86% is higher than the NBA average of 74.4% black players.

Which is why the Nets are EXACTLY the kind of team you’d expect to get on board with hiring a white man with no coaching experience… The kind that probably LOVES himself some pineapple and Canadian bacon on his pizza.

I’m JOKING. Nash is much more the ketchup on a hot dog kind of guy.

So we’ve established Nash has never coached a game in his life. You know who HAS coaching experience?

Let’s look at that short list above. We clearly gotta LONNNNGGGG list of black coaches (think one of those scrolls that drop on the ground in a movie and rolls comically off screen) that have been waiting for an opportunity like this for a minute now. We even have one black man that coached the actual NETS on an interim basis after Kenny Atkinson was fired. A man who the internet thought Brooklyn might give another full season after displaying competence in a season that was very much in disarray. Major injuries, opt outs, picking up randoms off the street to enter the bubble etc., etc. By the time they entered Orlando, their roster was thin and the outlook was BLEAK. But they outperformed, largely because of their interim HC Jacque Vaughn.

Remember when that mish mosh roster beat the #1 seed Bucks in one of the greatest upsets in over 25 years (and yes, it REALLY was)

I’m not mad, I just think it's funny that Kyrie and KD (who are by all accounts social justice warriors) had veto say and a ton of power over who got the Nets head coaching job and they were like “yeah, Steve Nash is a good look for us.” They didn’t AT ALL think, “hey, maybe this sends the exact OPPOSITE message that we’re pushing for”?

I’m not saying it’s white privilege exactly, but if it looks like a duck and euro steps like a duck, it could possibly be … a Canadian goose.

He is an ally. He does care about social justice and dismantling systemic racism.

In fact, his avatar on Twitter … is George Floyd. 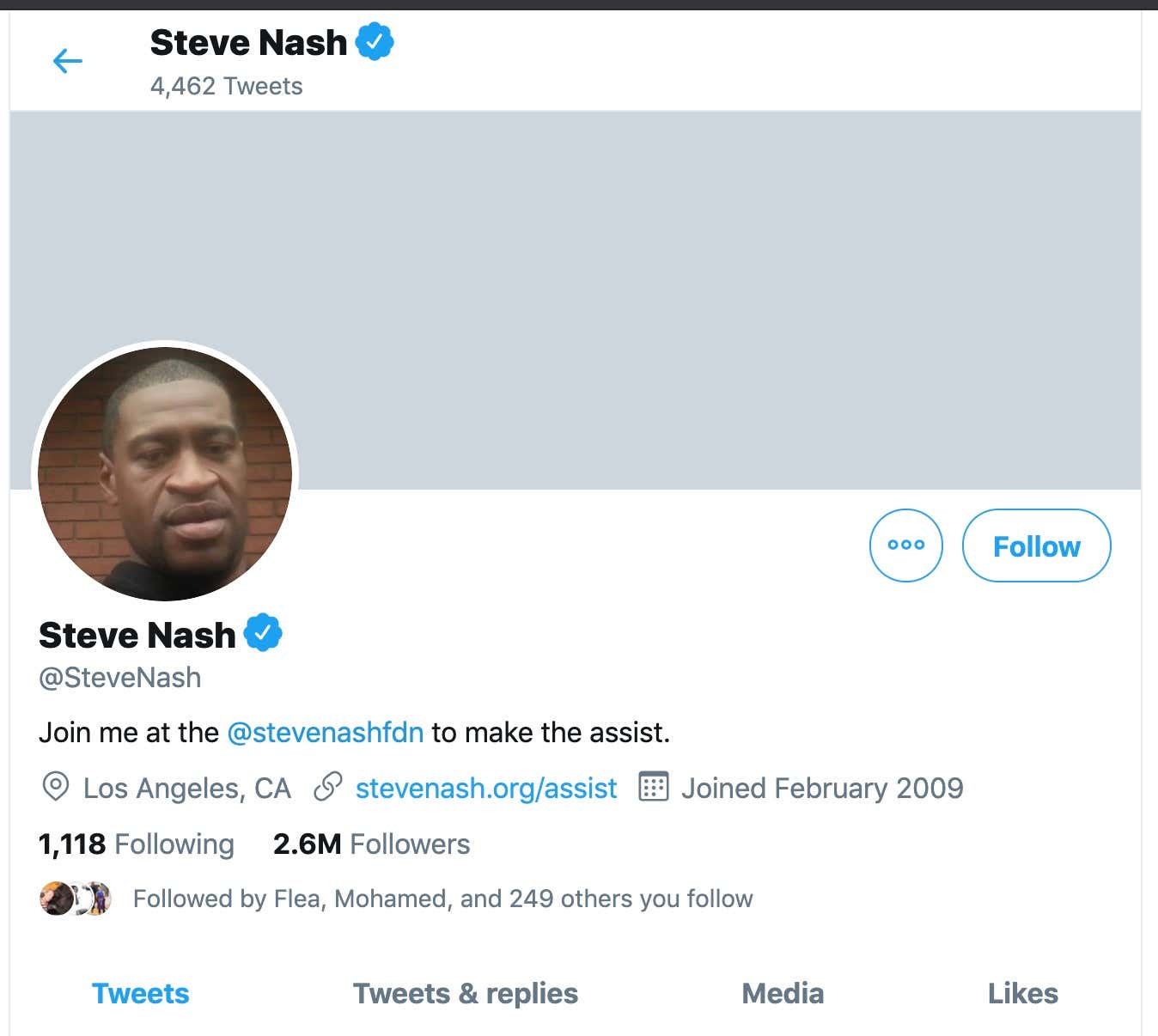 Let’s recap for those who came in late, shall we?

The Brooklyn Nets demoted a black man with ten years coaching experience for a white guy who’s never coached a game and who has a Twitter avatar of GEORGE FUCKING FLOYD. And they did this one week after the NBA shut down for three days over Kenosha.

Do you see how this may seem a tad … ironic, problematic, and slightly hilarious?

Nash’s hiring just kind of seems like a caricature of what equality looks like in 2020. Teams won’t actually hire a qualified black man, but will hire an unqualified white man who cares about hiring qualified black men for the type of job that he accepted that he himself was unqualified for.

A job that he is almost guaranteed to succeed in because of the two first ballot hall-of-famers on the roster.

And the fact that our Canadian ally doesn’t see how problematic it might be to apply for a job with no experience, taking that opportunity from one of the many qualified black men who have applied, is also a bit problematic.

But hey, he’ll probably lead the Nets to win multiple chips and we’ll all anoint him as the GOAT like we do Steve Kerr. Who? You remember him. He’s the guy who also got a job with zero coaching experience, benefiting from a stacked roster with a pair of future hall-of-famers and a winning culture that … Mark Jackson, a black coach, created.

Nash is by all accounts a good guy. This isn’t really about him. And he’s not the first point guard to get a job with no coaching experience (think Doc Rivers and Jason Kidd). But in this atmosphere, in this moment? With black America watching for any hopeful sign things are changing for the better? Hiring a white man with no experience over numerous black men with tons of experience to coach a team BALLS DEEP in the BLM movement just seems like the wrong message.

Even if that white guy has a photo of George Floyd as his avatar.