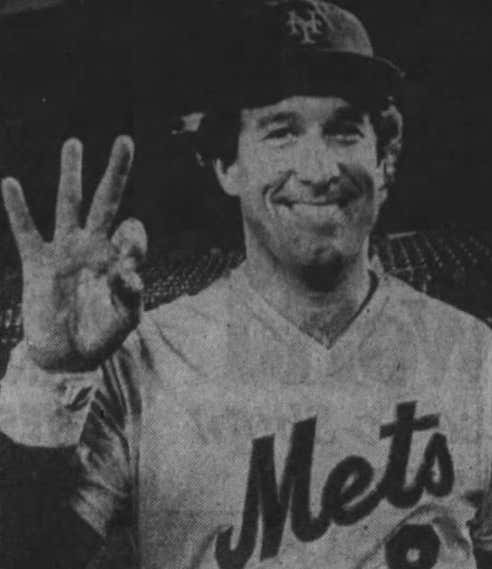 The New York Mets complete a three-game sweep of the San Diego Padres with a 9-2 win at Jack Murphy Stadium. Leading the charge for the Mets was Gary Carter who hit a pair of home runs and had three RBI. One day earlier, Carter had three home runs and six RBI as the Mets won 8-3. He is the 11th player in major league history to hit five home runs in two games.

Gary Carter was born on April 8, 1954, in Culver City, California. A star in football and baseball, Carter won the Punt, Pass, and Kick contest as a seven-year-old. In 1972, he turned down a scholarship from UCLA to play baseball after being drafted in the third round by the Montreal Expos. Carter made his debut at the end of the 1974 season. In 1975 he made the National League All-Star team and finished second in Rookie of the Year voting. Over the next decade, Gary Carter became a fan favorite in Montreal, winning the All-Star Game MVP in 1981 and 1984. Unable to reach Carter’s salary demands, the Expos would trade him to the Mets during the winter meetings.

Gary Carter was everything the Mets expected, on opening day he hit a walk-off home run to beat the St. Louis Cardinals 6-5. The Mets and Cardinals would battle all season for first place in the National League Eastern Division. The Mets hit a rough stretch in June, but as September began were neck and neck with St. Louis, holding a record of 77-52 for manager Davey Johnson. The Padres meanwhile after a strong first half, were scuffling at 69-60 under manager Dick Williams.

The Mets won the first game of the series 12-4, with Carter collecting three hits in five at-bats, with one RBI. In the second game, Gary Carter tormented Padres’ pitching, as he had three home runs in four at-bats with six RBI as the Mets won 8-3. Carter’s first dinger came in the first inning with Keith Hernandez on base. In the fourth inning, Gary Carter led off the inning with a home run. Darryl Strawberry followed with a home run of his own to make the score 4-0. In the fifth inning, Carter went deep again with Hernandez and Tom Paciorek on base to make it 7-0. The Mets later added a run on a triple by Lenny Dykstra. Rick Aguilera was the beneficiary of Gary Carter’s big game, improving to 7-5 on the season, while Dave Dravecky took the loss.

Looking to complete the sweep, the Mets got off to a good start when Gary Carter led off the second inning with a home run off Roy Lee Jackson. Wally Backman later got an RBI single to make it 2-0. After the Padres scored in the third inning, the Mets got a pair of runs in the fourth when Danny Heep scored on a Howard Johnson triple. HoJo later scored on a balk by Roy Lee Jackson to make it 4-1. In the fifth, Carter singled home Backman to make it 5-1. In the seventh, the Carter went deep again, his second of the game and the fifth in a two day period. After San Diego scored in the eighth, the Mets added three more runs in the ninth to win 9-2, as Ron Darling improved to 14-5 on the season.

The Mets would fall short in their quest for the postseason, finishing 98-64. Gary Carter finished his first season with the Mets with 32 home runs and 100 RBI, while batting .281.