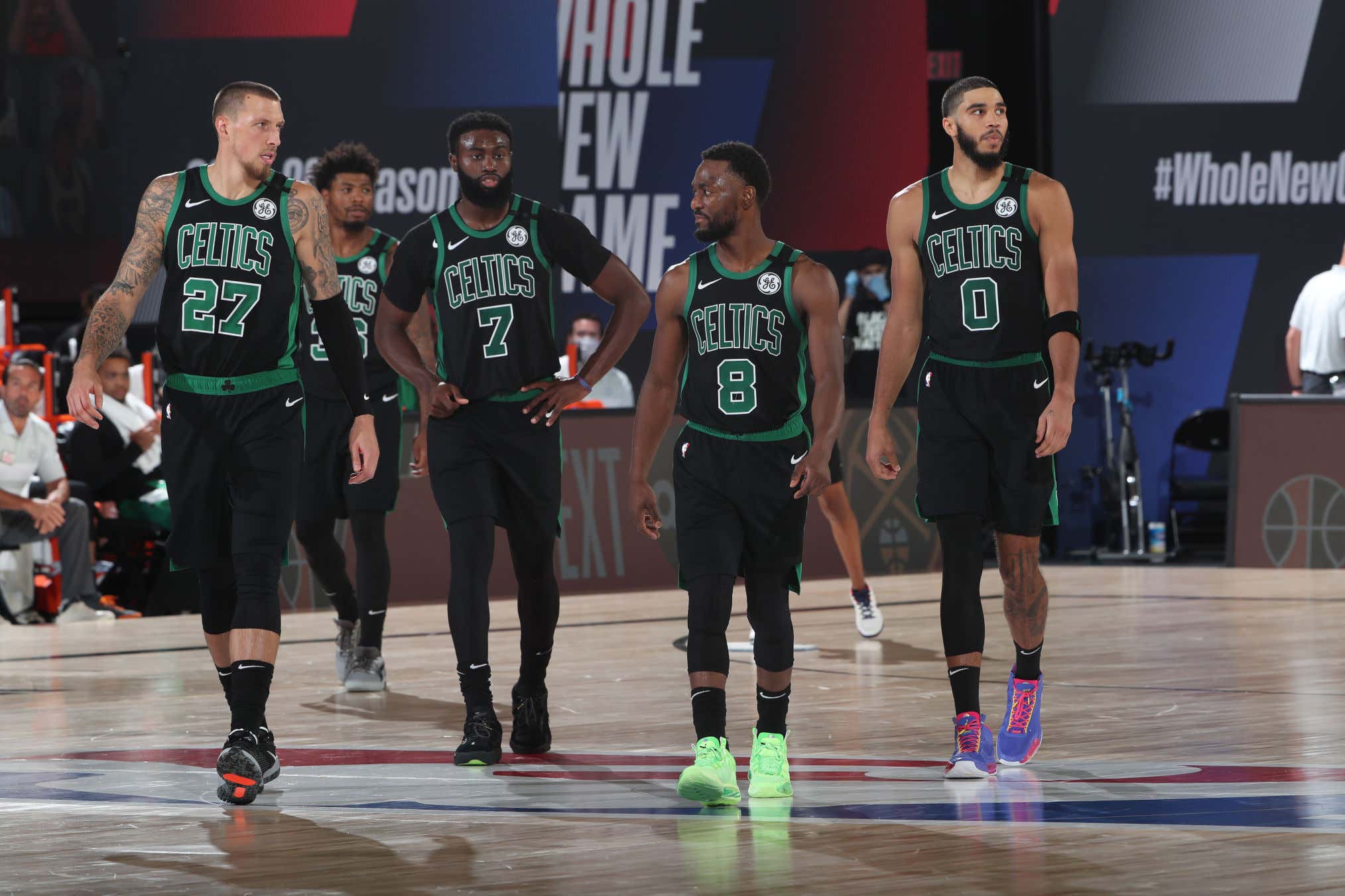 Has everyone come down yet? I sure as shit haven't. Not even close and I have a feeling that won't be changing anytime soon. I'm just going to say it and I don't care if this makes me sound like a homer. The Boston Celtics are the best team in the bubble right now. With 6 straight playoff wins and 10 straight bubble wins for the regular starters combined with the 7th best offense, 2nd best defense, and #1 overall net rating, that's just the facts of the situation. You can disagree if you want and be wrong, that is your choice, but they are playing the best basketball out of anyone still alive right now.

We knew the Raptors would respond and play better in Game 2 and that's exactly what happened. I wouldn't say this was their "best" punch, but it was certainly better than what we saw in Game 1. That's what has me so jazzed up about this team right now. The defending champs came out and punched this team right in the mouth twice, and the Celts responded both times. There is no quit in this team and that is exactly what you need to get to where we all want to see them go.

The best part? This team can still play so much better. That's a scary thought considering they are already winning all their games. I do think it's important that they are tested as the playoffs go on and that's why last night was important for me. I want to see this team respond well to adversity and not fold when things get tough. We know what that looks like after last year, but this group is showing to be the exact opposite.

We have a lot to get to so let's dive in.

- A long time ago I made peace with the fact that Marcus Smart was never going to make sense. I accepted his poor shot selection and rough shooting stretches knowing that he impacted winning unlike any player on the roster. Yesterday was a prime example of why a majority of this fanbase will die for this man. It's why we love and trust him. Just see for yourself

I promise you that is not a fake video from 2K on easy mode or some shit. That really happened. Those fourth quarter threes were real

I think after the third one I passed out, and after the 5th one I don't even know what happened. I don't care if Marcus takes 10 threes in Game 3, he's earned that right. But when you talk about Smart's performance you have to mention that it was so much more than that fourth quarter three bukkake. He made all the little plays that he normally does to impact winning. Going for that offensive rebound on Jaylen's three at the end to get Kyle Lowry out of the play, leading the team in defensive box outs with 5, and then the defense.

The defense is where his impact was just as great as those threes. He held all Raptors to just 1-8 shooting and 2 points. Siakam and Lowry were scoreless. Fred VanVleet had the two points. Game 2 was a performance where Smart showed up on both ends and that is why we love him.

- We all wondered if we would be getting February Tatum once the bubble restart began, and the fact of the matter is we are getting close to a better version

Stud. Star. Beast. Pick whichever one you want because they all fit. Remember, this isn't the sorry excuse for a defense like the Sixers were. The Raptors are legit on that end and Tatum is doing whatever the hell he wants. You see that tweet of his stats for the entire playoffs, well in this series they just as solid

That's February Tatum level efficiency folks. The best part of his series so far is that he's looking for contact. We're seeing Tatum be aggressive with the ball and his 14 FTA weren't an accident. Now, instead of taking a tough fall away jumper he's being patient, using his pivot foot and heading towards the basket. I feel like that was the final infinity stone to truly unlocking his offensive potential.

He also continues to be a beast defensively as well, and as we know to truly be a star in this league you need to be an elite two way player. Remember, Jayson Tatum is 22 fucking years old. Man is it so good to be us.

- Just watch this team play defense. Granted you might not be able to stand for 4 hours but I promise you it's worth it

The Celts held the Raptors to 23/9% shooting in the fourth quarter. I know the offense will get a lot of love for how those 12 minutes unfolded, but this team's success all comes back to their defensive effort and energy.

- I don't even know what more to say about Robert Williams other than he is a legit contributor on a playoff team. This isn't a fluke. The Raptors are a real opponent and Timelord is coming in and giving them the business

Rob kept this team in the game in the first quarter and without his production who knows what happens. The dunks are incredible, the midrange jumper made me legit gasp, and the more time he gets the better he's going to be defensively. There are still mistakes on that end but give the guy a break, he's barely played. But there is no denying that he has made a real impact in both of these games so far and he gives the Celts something that neither Theis or Kanter do. His athleticism is a real weapon and his quick jumping ability is important.

But please, tell me more about how Danny Ainge can't draft.

- We're still waiting on his efficiency to come around in this series, but Jaylen did everything else in this game

I really like the 8 rebounds, 3 steals, and 2 blocks. That tells me that even though his shot wasn't exactly falling Jaylen was still extremely engaged. That shows signs of growth for me because there was a time when the two Jays would check out if things weren't dropping offensively. The fact that we haven't even had the breakout Jaylen game offensively yet makes me very very excited because you know it's coming.

and despite the fact that the man could not buy a bucket for the majority of the game, when it came to nut cutting time and this team needed Kemba to deliver, that's exactly what he did

How about a perfect 4-4 fourth quarter for 11 points and the game sealing step back. That's the Kemba we know and love and why I trust him in big moments down the stretch. This is now twice he's made dagger jumpers in the final moments in the playoffs and for me Kemba is passing his first Celtics postseason test with flying colors. There is a lot of basketball to still be played, but so far so good.

- So much was made about the Celts lack of bigs, but once again they won the rebounding battle, had more blocks, and more second chance points. So far this postseason their size issue has been anything but an issue.

- I want to stress it again. I love the fact that this team did not back down despite getting down early in the first and then again down 12 in the second half when it looked like TOR was going to pull away. That's the mental toughness that I was hoping to see.

- But of course, it wasn't all positive. These are the Celtics we're talking about after all. We may as well start with the biggest issue for this team which continues to be their turnovers. Another 17 last night, and I don't really care that it didn't cost them either game. This shit has to stop. A total of 4 for Jaylen, 4 for Tatum, and 5 for Smart. It's just too many. It's one thing to travel or pass the ball out of bounds, but the Celts continue to have live ball turnovers which lead to easy Raptors baskets. You are playing with fire with that shit and one of these days it IS going to hurt you. They have to take better care of the basketball the deeper they go in these playoffs or we'll all be having way less fun.

- Kemba's first through third quarters were rougggggghhhhhh. Like 2-14 rough. The tough part was for the most part he was getting wide open looks too. Just one of those nights I suppose and he certainly made up for it, but man was that tough to watch to start.

- I'm sure he's a great guy, but I'm starting to think Semi is flat out unplayable in this series. You saw Brad go with Grant in the second half, and while I acknowledge that Semi gives you something defensively against Siakam, he's having a brutal series. Game 2 was especially rough as he just looked lost. This team needs him to be able to make an open spot up three and if he isn't going to do that then Brad can't play him. Grant can give you just as good as defense and looks much more comfortable out there.

- Come on, you should know the rules by now. This team wins at least 5 in a row we are on a break from this section until they lose. It's the least I could do.

I'm going to stress this because we all need to be on the same page here. A 2-0 lead is NOT a 4-0 lead. We just saw a team blow a 3-1 lead in these playoffs. Anything can happen. This series is far from over and Game 3 will be a battle just like Game 2 was. All we can do is take this one game at a time. Don't think the Raptors are going to just roll over, that's not who they are. They are a resilient team who is going to go down swinging. Thankfully, the Celts look to be up to the challenge.