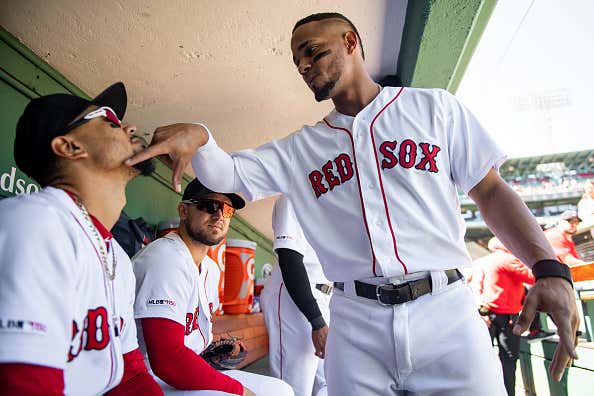 Finally. When the Boston Red Sox traded Mookie Betts and David Price to the Los Angeles Dodgers, it was a foregone conclusion the luxury tax would reset as it does every year and then it would be business as usual moving forward. Then a global pandemic started up and suddenly it was as probable as it was possible that the luxury tax reset date could be pushed back to 2021. Thankfully Rob Manfred does not appear to care about the health and safety of his players as he pushed forward no matter how many positive COVID tests came in. With the trade deadline officially passing this afternoon, the Red Sox are in the clear. A thing that I've been told repeatedly since February is super important and worthwhile. So… here we are.

The next moves the Red Sox make with their newly acquired breathing room are paramount to the future of this team and also Chaim Bloom's legacy in Boston. Will he be forever the guy who traded away Mookie Betts or is he going to repeat what he did in Tampa Bay while utilizing the freedoms that come along with overseeing baseball operations in Boston? That is what hangs in the balance for him. Theo will always be the gold standard. Dan Duquette is liked and appreciated but ultimately never got over the hump which plagued this organization for 86 years. Ben Cherington wasn't nearly appreciated enough for being able to stand up to public pressure and scrutiny by NOT trading the farm for Matt Harvey or Cole Hamels. And Dave Dombrowski won a ring, and is currently being viewed as the reason the Sox are even in this mess in the first place. I maintain he deserves little if any of the blame given the fact that he did what he always does. He was given a blank checkbook and used it. If the strategy from the top was to get under the threshold while keeping its core players then he wouldn't have been given such freedom when it came to re-signing Nathan Eovaldi. I don't bring this up to rehash the recent past, I bring it up as a forewarning. The team sucks as much now as they have this millennium. They're unwatchable. Their two best pitchers are hurt and their futures' are potentially up in the air. There are holes up and down the lineup. The bullpen remains in shambles. Enough work to be done that cannot be fixed by giving out contracts a la Hanley Ramirez and Pablo Sandoval.

I don't think I've ever seen a free agent market better suited for sitting on your hands and letting it pass on by. Of course I'm referring to the big money players. You bring in some lottery tickets, a pitcher who lost his way, a couple of relievers to see if they can stick, some ancillary pieces on one year deals you can flip at the next deadline for more prospects. Trevor Bauer isn't the move. Not because he's bad, that would be a lie. But the man is bound to a blood contract with one of his friends. He cannot sign deals longer than one year or else his friend gets to shoot him in the nuts with a paintball gun from 10-feet away. Admirable, but with knowing that there's no reason to offer him until you're ready to contend. He'll be available when that time comes, he seems like the kind of guy to cost himself tens of millions of dollars over a bet just to prove a point. You hope to get Chris Sale and Eduardo Rodriguez back to form next season, then toss Bauer in that mix when you know Sale's arm can withstand an entire season and Eddie's heart makes a full recovery from contracting COVID-19.

Chaim Bloom cannot sign George Springer. That's just a name. That would be to win the headlines. That's not a move to win now or long term. That's Hanley, Pablo, Carl Crawford all over again. You cannot punt on a superior, younger player only to turn around and give an inferior, older, unproven in this market player a bag. That would be a sign that this was not a shift in organizational thinking when it comes to team construction. That would be the same ol' shit that got us into this fucking problem in the first place. George Springer is a fine player. He went to UConn so I've been told. That's great. I'd much prefer watching Jaren Durran, Alex Verdugo and whichever of Jackie Bradley, Jr. or Andrew Benintendi Chaim decides to keep. Let's see some more Bobby Dalbec and work in Triston Casas and Jeter Downs next year. I'd much rather see what the kids have than spend on George Springer on the opposite side of 30. Especially since this way you know really what you need heading into 2022.

2022 is a loaded free agent class… at the one position the Red Sox absolutely do not need to address. Francisco Lindor, Javy Baez, Trevor Story, Carlos Correa, and Corey Seager all hit free agency the same winter. Which means the Red Sox have (theoretically) another full season to see if Rafael Devers glove is fine at third long term or do they move him to first. If Casas' bat plays and his glove is good enough, do you move Devers to DH and lock that in for the next 15 years? Because while Xander Bogaerts is undoubtedly one of the top SS in today's game, would it be worth moving him to third if Francisco Lindor wanted to come to Boston? Or do you go through with all that movement of Devers but keep Bogaerts at short while bringing in Kris Bryant from Chicago?

That's where you spend your money. Fill holes, bring in elite talent, all while seeing what your farm yields for a large enough sample size. All while making secondary moves to keep replenishing the farm system while trying to hit on lottery ticket arms a la Nick Pivetta. I've said it before, I have no idea if Nick Pivetta, specifically, will hit in Boston. I have major questions about the pitching development processes that take place within this organization and I have no idea if the advanced analytics department is sharp enough to identify which pitches their pitchers should be focusing on and eliminating. A revamp on those fronts is long overdue and would be greatly appreciated. But I believe in the process behind acquiring that type of player. Pivetta is a lottery ticket. A player everyone in Major League Baseball believes is great despite his production not matching that belief. Other teams have proven to be able to take a once heralded top prospect, fix his mechanics, get him throwing his best pitches, and turn them into reliable starters all across the league. The Jake Arrieta Orioles fans know and the Jake Arrieta Cubs fans know are two completely different pitchers.

This aspect feels like an extremely important part of this rebuild because if you noticed I didn't name any great free agent pitchers hitting the market over the next few years. Bauer is there, he's always there by his own choosing. Kershaw, Scherzer, Greinke, and Verlander all hit the open market next winter and they're all in varying stages of the tail ends of their careers. Syndergaard and Archer both hit the market, but Bloom literally traded away one of these guys already and the other can't stay healthy despite being tremendously talented. Blake Snell hits the open market December of 2023. The earlier he could join this rotation is 2024. That's a long ways away before you can break out the checkbook for a front line starter who remotely fits in your timeline. Of course trades exist, and maybe one or two of the five pitchers currently ranked in the top 10 of the Red Sox farm system can make a name for themselves in Boston. (Though Noah Song is currently on deployment with the Navy, the earliest he could be in Boston is 2022. #ThankYouForYourService.)

Mookie's gone. The trade deadline came and went and the rest of the 2018 World Series Champion core remains in tact. The luxury tax is reset. There's work to be done. This is what people wanted, the time has come to see if it was all worth it.