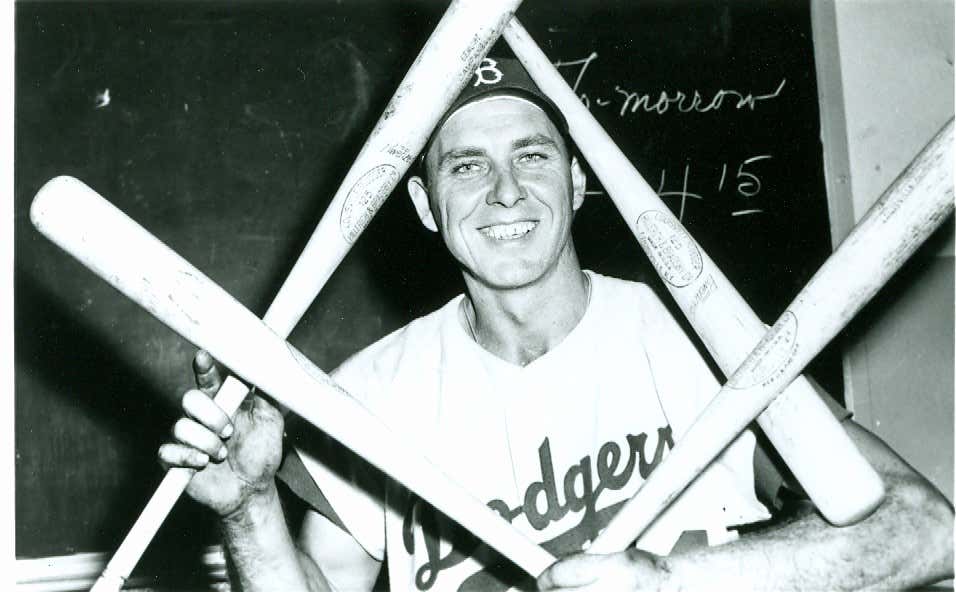 Gil Hodges of the Brooklyn Dodgers is the sixth player in major league history to hit four home runs in a game, as the Dodgers pummel Warren Spahn and the Boston Braves 19-3 at Ebbets Field. Hodges also adds a single, in getting five hits in six at-bats with nine RB, as each dinger comes with runners on base.

Gilbert Ray Hodges was born on April 4, 1924, in Princeton, Indiana. The son of a coal miner, Hodges, was a four-sport star in High School. He turned down a chance to sign with the Detroit Tigers in 1941, choosing to attend St. Joseph’s College with an eye to coaching. In 1943, Gil Hodges signed with the Brooklyn Dodgers and appeared in one game before joining the Marines for World War II.

Earning a Bronze Star as an anti-aircraft gunner in the Pacific, Gil Hodges returned to the Dodgers and spent 1946 in the minors. Hodges was a late-season call up in 1947 and made the majors to stay in 1948, becoming the everyday first baseman for the Dodgers. In 1949 Hodges had a breakout season for Brooklyn, making the first of seven straight appearances in the All-Star Game.

Both the Brooklyn Dodgers and Boston Braves were in the hunt for the playoffs as August came to an end. In making up a rainout from earlier in the season, the Dodgers managed by Burt Shotton held a record of 68-50, as the Braves managed by Billy Southworth were 68-53. Carl Erskine made the start for Brooklyn, while the Braves had ace Warren Spahn on the mound.

After a scoreless first inning, the Braves drew first blood with a home run by Sid Gordon in the second inning. Brooklyn answered right away as Carl Furillo led off with a single, which was followed by a home run by Gil Hodges. Pee Wee Reese followed it up with an RBI double to build a 3-1 lead. In the third inning, the Dodgers added to the lead as Jackie Robinson and Furillo singled to send Spahn to the showers. Normie Roy came on to face Hodges, who hit a three-run shot to make it 6-1. The Dodgers would add four more runs in the third, as two runs scored on a grounder by Reese, with Duke Snider following with a two-run shot.

Gil Hodges grounded out in the fourth, as the Dodgers held a 10-1 lead. A lead that remained in the sixth inning when Hodges hit a third home run, following a walk by Carl Furillo to make it 12-1 off Bob Hall. The Dodgers added two more runs, with Reese and Snider each plating a run to make it 14-1. In the seventh inning, Gil Hodges singled and scored on an error. The Dodgers continued to pile on when Tommy Brown scored two more runs on a single off Johnny Antonelli.

Down 17-1, the Braves scored twice in the eighth inning, in the bottom of the inning Carl Furillo was standing at first again when Gil Hodges came to the plate for the final time, once again he would get a trip around the bases as Hodges hit his fourth dinger of the game. Carl  Erskine would finish the game for the Dodgers, who won the game 19-3.