First of all, I did not think were were going to see a more impressive putt than this 43-footer from Dustin Johnson to force a playoff against Jon Rahm

That is a ridiculous putt. It broke every which way and still somehow found the bottom of the cup once it was all said and done.

But hold on a second, Jon Rahm went ahead and one upped DJ and made on of the craziest putts you will EVER see. A 66-footer that took a full day to travel but, once it got there, dropped into the hole

I'm not kidding when I say that's one of the greatest putts in the history of golf. How could it not be? You've got a playoff between the #1 player in the world and #2 player in the world during the playoffs and one of them drains a SIXTY SIX FOOT putt to win. It doesn't get much better than that if you're looking for drama and intrigue. Before Rahm stepped up to that putt I would've given it a 0% chance of going in. There was just no way it was ever going to go in. At best he was going to lag it up there close and get outta there with birdie. Instead he went ahead and fucking made it. Unreal.

Even Rahm couldn't believe it 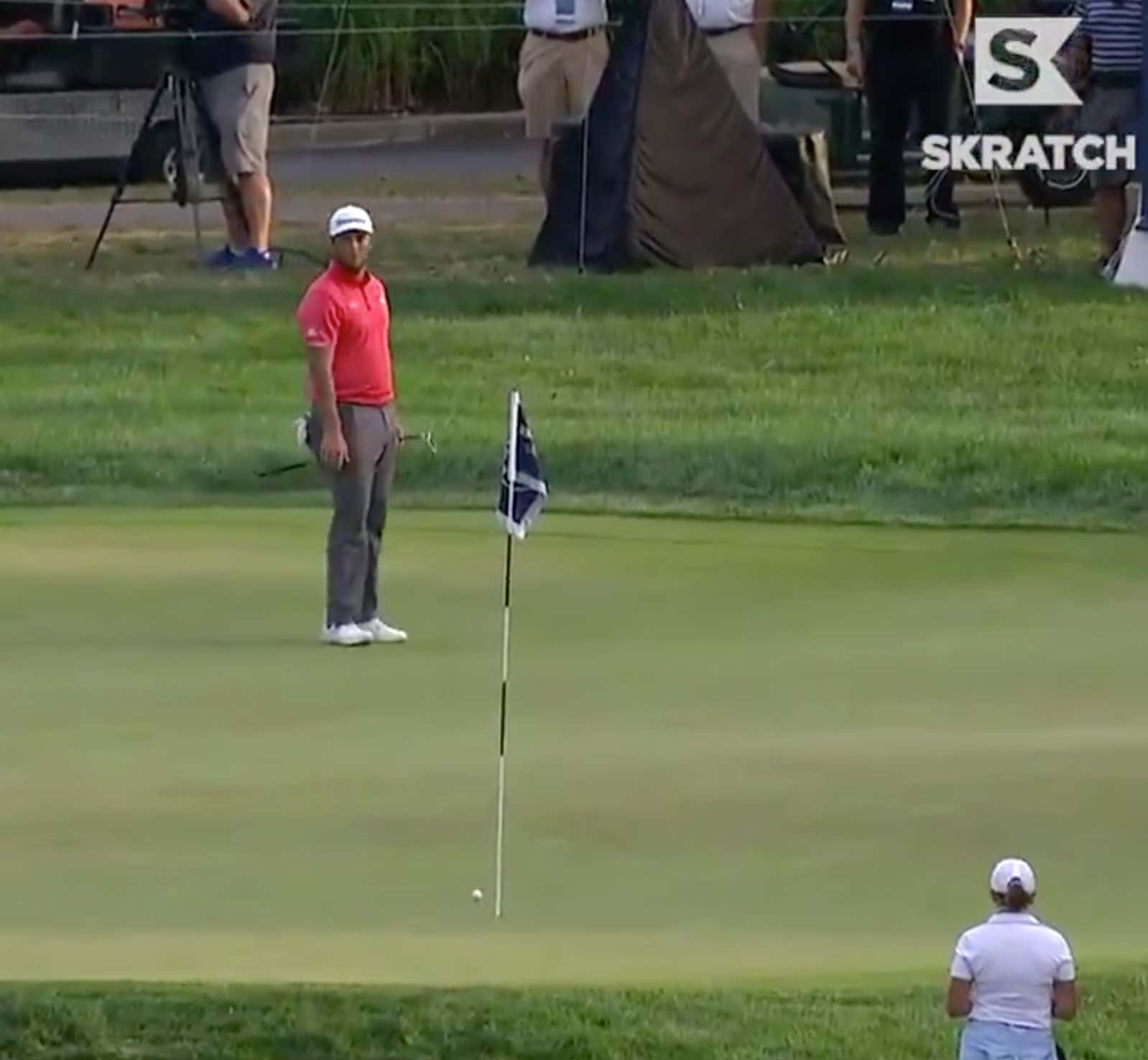 And it did. Crazy. Between those two putts from DJ and Rahm respectively, that's one of the greatest finishes we'll ever see. Just two golf titans draining putts that have no business even sniffing the hole, let alone going in. Golf is awesome man. It has delivered some gigantic moments during these crazy times.

And you know what's also crazy? The playoff itself should've never happened. Rahm should've won by a stroke in regulation if it weren't for him having a complete and total brain fart and picking up his ball without marking during Saturday's round:

Rahm picked up his ball from the green without marking during Saturday’s third round of the BMW Championship and picked up a one-stroke penalty. He finished with a bogey on the par-4 on his way to a 4-under 66.    Rahm said he was holding his marker, a poker chip with the logo of his alma mater, Arizona State, as he walked toward his 43-foot putt. He was then holding his marker and his ball.

“I just went at it, and for some reason, I just picked up the ball thinking I marked it already,” Rahm said. “I was thinking of somebody else and something else or somebody, and yeah, I just picked up the ball without marking it, simple as that. Once replaced it, took the penalty and moved on. … “I really can’t give you an explanation. It’s one of those things that happen in golf. Never thought it would happen in my professional career, but here we are.”

Truly bizarre. If that doesn't happen then DJ's putt holds far less significance and we never even get to Rahm's 66-footer. I gotta tell ya, I'm glad Rahm didn't mark his ball on Saturday. That would've robbed us of one of the great finishes in PGA Tour history. Holy shit what a finish. I need a cigarette and I don't even smoke.

We're onto the Tour Championship.