Smash Mouth had a concert in the middle of a pandemic AND YOU'LL NEVER BELIEVE WHAT HAPPENED NEXT!!!

During the Smash mouth set (and the festival as a whole) attendees ignored social distancing guidelines, including getting close to each other and refusing to wear masks. During the Smash Mouth set, lead singer Steve Harwell said: “Now we’re all here together tonight. And we’re being human once again. Fuck that COVID shit.”

Well, it appears that simply yelling "fuck that COVID shit" was not enough to ward off the virus. a representative of the South Dakota Health Department said they linked at least 40 Covid-19 cases directly to the rally. Meanwhile, The North Dakota Department of Health tracked 17 in-state cases related to the rally, and further stated that at least 103 connected cases have also spread to Minnesota, Montana, Nebraska, Washington, Wisconsin, and Wyoming.

It's the update I coulda written the day I wrote the first article. It's actually incredible how easy it is to predict these things. Play stupid games, win stupid prizes. These guys just NEEDED to see Smash Mouth in concert, and now someone is going to die as a result. Imagine laying on your death bed at 43 years old because you needed to hear them sing the song from Shrek. Well it woulda been nice to see your children grow up, but singing along to Hey now you're an All Star was just more important.

I mean we're going to be dealing with this COVID thing forever. It's sort of been pushed out of the public eye, but 1,000 people are still dying per day from it. New Zealand went back into crisis lockdown mode after they had like, 9 new cases, yesterday we had 44,000 new cases!

It's actually sick in retrospect looking back at March, if the entire country just wore masks and stayed inside for 2-3 weeks, so much would be different now. Again, it's sort of nuts we have just forgotten about Covid as a country because we were doing SO GOOD but then we got cocky andddd 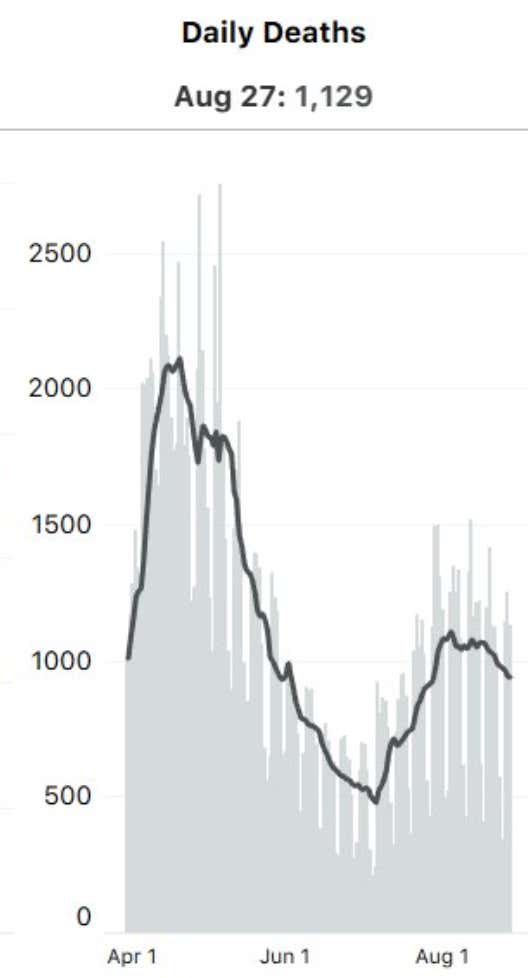 We are back on the decline again (knock on wood) which is good, and let us PRAYYYYYY it doesn't swing back up again. I really want to go to hockey games again. Really badly. So stop going to Smash Mouth concerts you dumb fucks, it's not that hard.