If you listen to Barstool Chicago Radio like you should, you'd know that we rotate who picks our intro song each week, unless something big in music happens, then we'll pivot to opening with that artist for that day only.

Well I would like to say I completely fucked up yesterday and own up to a massive mistake. What mistake you ask? Well, I received this DM this morning: 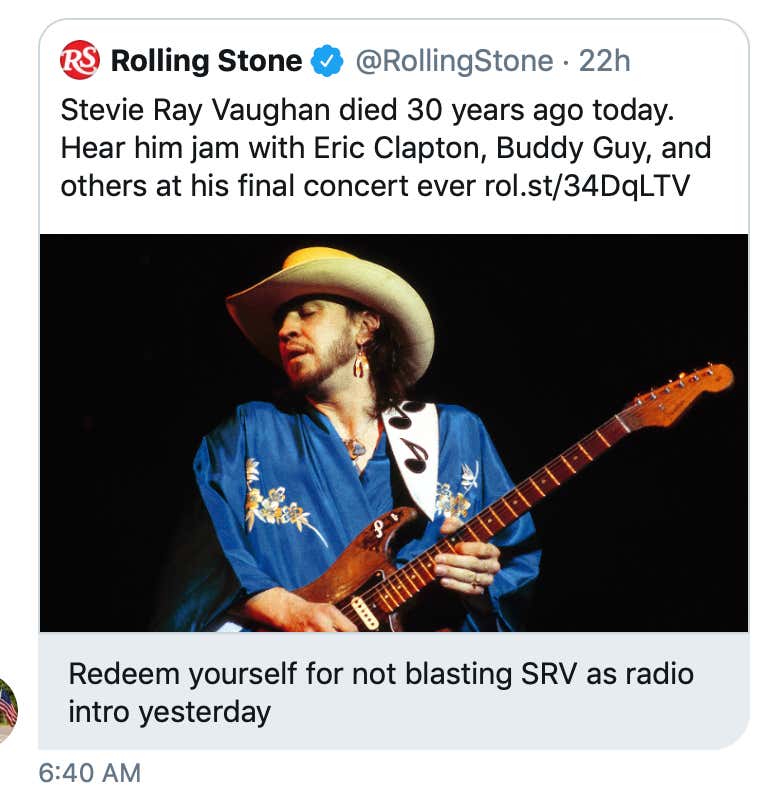 There is absolutely ZERO excuse for not playing some SRV yesterday to open the show yesterday. For me, as someone who takes prides in being a "music guy", I am embarrassed and it's simply because Stevie Ray Vaughn could absolutely, without question be considered the greatest guitarist in music history. I've said it time and time again, that I would take him over any guitarist ever; Clapton, Page, Hendrix, Knopfler, Mayer, Barry, Alman, Raitt, Townshend, Morello or whoever else. To me, it's SRV and then the rest.

Sure, that's an objective opinion and I can't actually prove that he's the GOAT, but you can't argue that he's not either. And to have died 30 years ago yesterday… fuck. I turn 32 in 2 months so I don't remember his death, but it took place at Alpine Valley, a concert venue just over the border in Wisconsin which is a right of passage for any Chicagoland teenager and 20-something year old to make a pilgrimage to for a concert. He got in a helicopter which crashed almost immediately after their concert and…. Eric Clapton was supposed to be on that very helicopter with him, but wasn't for whatever reason. It was a true tragedy and music lost a really, really good one when it happened.

SRV died at his peak and he isn't some obscure figure that I'm writing about like John Price for instance. He's globally known as one of the best rock and roll musicians in history. I don't have to tell you that though, I'll let SRV take it from here.

His "Live At Montreaux" show is my favorite live performance of his. I will routinely come home shitfaced at 230am and fall asleep to this very performance blasting on my laptop. It's incredible. Just a work of art:

And on top of that, here are a few samplers of his most popular performances:

Just fucking incredibly gifted. I think he's the GOAT and even if you don't, there's no arguing that he's close to it.