Fellas, it’s happening right before our very eyes. Today’s young men are becoming softer and softer by the day. Twenty-somethings talking about feelings that they should be bottling up, men using conditioner when they shower, and fathers withholding their sons from football; being concerned for their “temporal lobe”. It’s feminine and sickening.

What happened to the traditionally masculine role models of yesteryear? Where are the Robert Reeds? The Rock Hudsons? The John Travoltas? The Kenny Chesneys? It may seem like they are extinct, but I was lucky enough to know one since birth. My very own father.

Every time I get the chance to hang out with him, I tend to rub it in to some of the guys.

My dad is the typical man's man. Like an Ancient Greek soldier. Try to think of a masculine job. Bartender? Sure. Pilot? Hell yeah. But imagine if you combined the two. That's exactly what my old man did. He serves ice cold beer on airplanes. The bartender of the skies. All of his coworkers are women, and he’s dealing with turbulence so much his walk now has a permanent sway in the hips. A modern day sea legs. His friends always jab him for this by saying "Hello, sailor" every time he walks by. A job that leaves him so exhausted, he now sleeps in a separate bed from my mom, so she doesn't wake him with her constant nagging or crying.

He's an old school type of guy that keeps everything closeted to himself, the way it should be. The only way I can learn about my dad's interests are through serious investigative work. I found out he was an avid Libertarian by finding a car show hosted by Rand Paul on his DVR.

I only knew he was a wrestling fan when he rushed home after a Culture Club tribute show, telling me he couldn't miss Monday Night RAW with our live-in Thai uncle, Axel. I only found out my dad was a coffee bean enthusiast when I saw the app Grindr on his phone. He downloaded it, matched with a seller, met him out, and came home the next morning limping, after what I assume was a fight over a pricing dispute. And being the role model he is, refused to go to the doctor, even after I overheard Axel say how tight and knotty he was. Growing up right outside of Pittsburgh, I assumed he would be a Steelers fanatic, until one night my mom complained that my dad was at the bar oogling at the Bears again.

Upon first glance, you wouldn't label my father a "strong" man, but he left enough clues that would leave even the members of an MMA forum mystified. 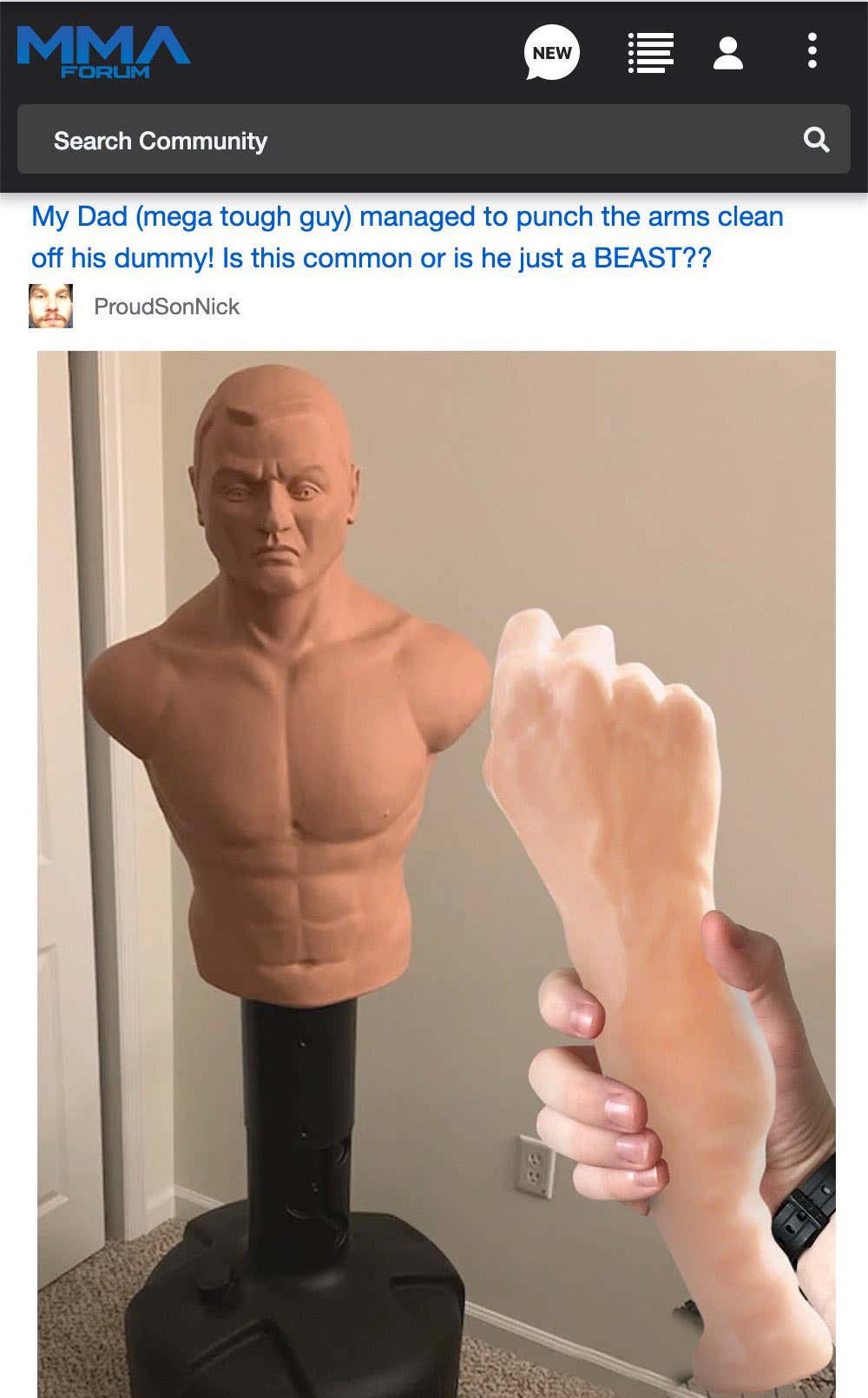 All of these things and more are what other men would brag about. But my dad, a straight shooter, knows what he likes and doesn't need to flaunt it.

Most people see father and son bonding and consider that "good" parenting. I call it coddling. My dad refused to play catch with me. Not because he didn't like to (heard stories from his buddies), but because he wanted to teach me the value of independence. I'm thankful for that every single day. When most dad's zig, my old man zagged. The only spiral my dad taught me was his secret rotini recipe.

Whenever I hop on Facebook I see my old schoolmates whose fathers were constantly intervening in their childhood. What they have become is a fate worse than death. They've become soft. Posting pictures of them eating fancy dinners, playing dress up in suits and ties as they go into their cushy desk jobs. I pity them. I pity them because I was raised the right way. The way a boy should become a man.

And look at me now, I may have landed the most masculine gig of all time, a blogger. Thank you dad.