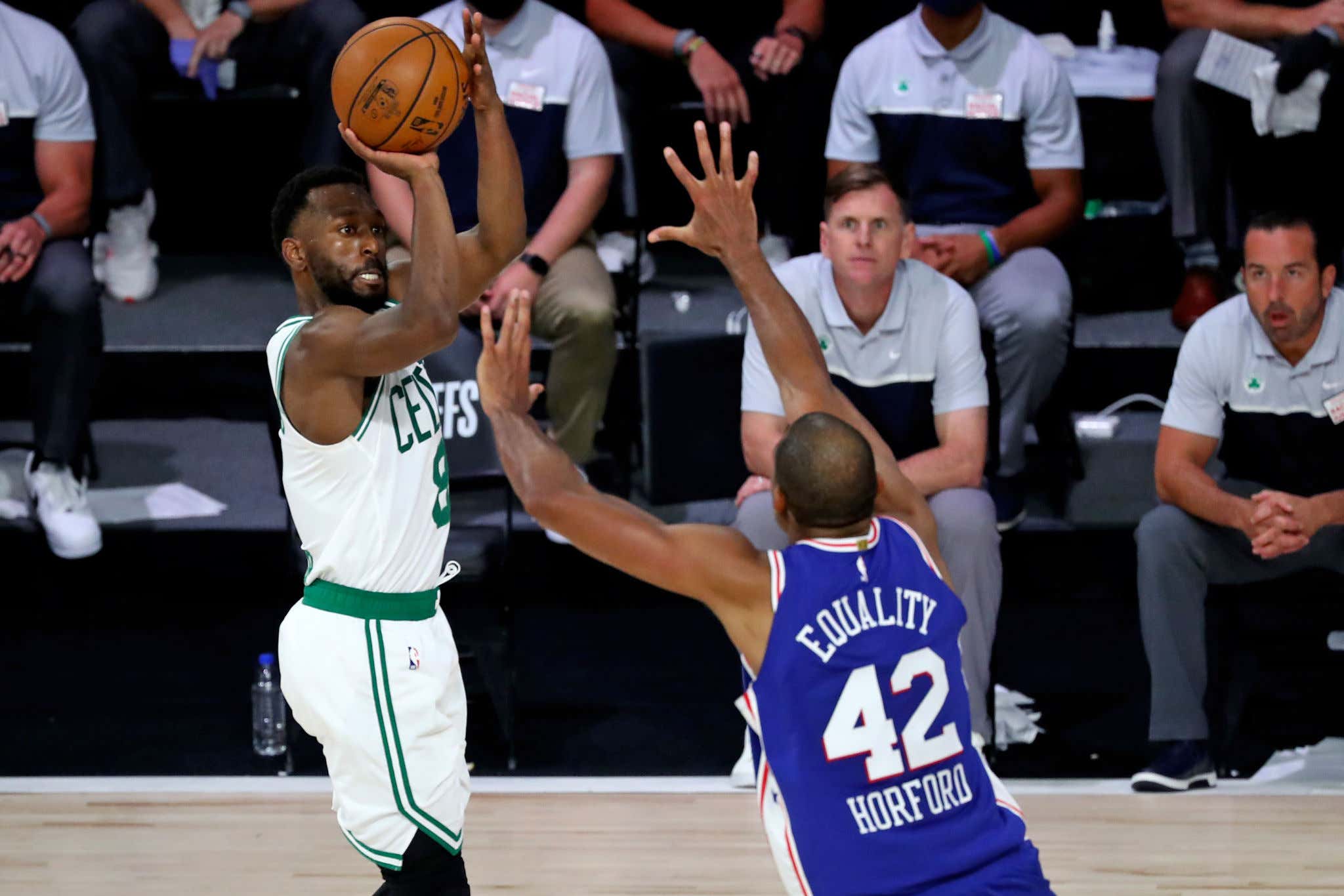 I have to say, I cannot recommend the 3-0 life enough. I hope everyone gets to experience this at some point in their life. The 3-0 sleep hits different, my 3-0 Dunkin tastes incredible, the 3-0 walk I took my dogs on this morning was beyond pleasant, I just can't imagine rooting for an NBA team that wasn't up 3-0 right now. How tragic. The best part? This team lost an important piece in Gordon Hayward, a guy who was giving them 17/6/4 on over 50% shooting and haven't missed a beat. How many other teams lose that type of production and fall apart? The Celts just keep on winning.

It's important to remember though, you don't advance for being up 3-0. You need 4 wins and that has not happened yet. This is where I'm interested in seeing what type of killer mentality this team has. They showed us a lot with how they won Game 3, but now I need to see them finish the job. I don't want a 4-1 series win. I want the sweep. I need the sweep. I crave the sweep. I want this team to have as much rest as possible before their showdown with the Raptors.

I think the best part of how this Game 3 ended up was the fact that the two Jays couldn't buy a bucket, the Sixers took 34 FTA and it still wasn't enough. That's how you break the Sixers spirit. This was their chance to give themselves a sliver of life and even on an off night the Celts pulled the plug on their life support machine. I know we all want to look ahead to the next series, but I will not allow you to do it. Before we even think about Game 4, we first have to relive what we witnessed last night

- Heading into this postseason there was a lot of pressure on Kemba Walker. That's the life when you're the starting point guard for this franchise. You need to perform in these moments. Having lived through guys like Rajon Rondo and Isaiah Thomas, we've seen some pretty incredible postseason point guard play over the years. Then the whole Kyrie Irving thing happened and we saw what it looks like when a "star" player folds in the biggest moments. So when Kemba came aboard, he needed to prove that he could handle it. This isn't Charlotte, the expectations are different. Well, here's how Kemba is responding

In my opinion, this was his first true big playoff moment for the Celtics. His 24/8/4 with just 1 TO on 50% shooting was exactly what this team needed. With Hayward out it's so important that Kemba is able to be that efficient scorer, and on a night where the two Jays were off it was even more important. Add to it that this was a close game all the way through, and it's hard to argue that Kemba didn't deliver.

In his first Celtics playoff series Kemba is throwing up 21.7/4.3/3.7 with 1.3 steals while shooting 48% from the floor. His three point shooting has been pretty brutal, but he's getting wide open looks. My guess is his 22% from three improves. All of the injury concerns we had about his knee appear to be a non factor, and he is filling his role pretty much to perfection. Not just with his play, but with his energy and buy in to what the Celts are doing. He loves the two Jays more than you love your own mother. He wants them to flourish. When things don't look great, he's accountable. Now this is obviously just the first round against the pathetic Sixers so it's OK to want to see it against real competition, but all we can do is evaluate based on what we're seeing at this moment in time. And that my friends is the Kemba Walker we hoped would show up.

Here's the thing with Marcus. You know what you're going to get every single night when it comes to his energy, his defense, his knack for making winning plays, all that shit. It rules and it is the lifeblood of this team. But what you don't know is what type of decision making you're going to get. Sometimes he can come in and do nothing but take early shot clock threes and it drives you crazy. Other nights, we get performances like this.

That's the #1 thing that stood out to me about Smart's night. His decision making was flawless, especially offensively. No more chucking threes bullshit. Instead, he was patient, went north/south, used his size to get into the paint while getting his defender on his hip and it's no surprise he looked a billion times better offensively. The Sixers have zero rim protection even with Embiid on the floor. He's not blocking shit, so it was great to see Smart realize that and take advantage. This is the version of Smart this team needs while Hayward is out. The one who doesn't feel he needs to force things by taking bad threes, but instead just plays the right way.

- How could you not love this team. Seriously. How.

And how about his effort on the defensive end? Here's a look at all of Jaylen's matchups of people who actually took a shot

All in all, the Sixers scored a total of 1 point while being defended by Jaylen Brown. One. That's a player who did not let his offensive struggles impact his energy and effort on defense. If that doesn't bring a smile to your face I don't know what will.

- Can we talk about how badly this team is dominating the Sixers in the second half of these games? It's borderline criminal. The Sixers rank 2nd to last in the league in second half points and are dead last in second half FG% and 3P%. Joel Embiid is averaging 9 points on 29/0%. Tobias Harris is averaging 7 points on 18/0% shooting. I don't know what Brad is doing at halftime but I would like him to continue to do it please.

- Shoutout to Daniel Theis who held Joel Embiid to just 9 points on 2-7 shooting. If not for his terrible whistle, Embiids point total would have been even lower.

- It was really great to see this team respond well to a game they really had no business winning. The fact that they gutted it out on the defensive end and went on a 10-0 run over the final 90 seconds to seal the game is that good stuff people talk about. They fought through tough calls and an off night offensively and dug deep to pull it out. There was no "oh well we still have a lead" mentality. That has me excited because it showed some real mental toughness which will be important as this playoff run continues.

- Grant might be the best playoff three point shooter this season. He hasn't missed.

- Jayson Tatum had 4 blocks, including the HUGE one late on Embiid. Much like Jaylen, he did not let his offensive struggles impact his defensive effort which he's been known to do in the past. That's very very important.

- I mean there's no other way to say it, going 12-35 from your two best players certainly isn't great. Even worse when that also included a 3-14 performance from deep. Tatum was missing wide open looks, I felt like Jaylen sort of settled for jumpers after his two easy dunks to open, it was just a tough night shooting for both. Chances are that doesn't continue, we've seen them both bounce back nicely from off nights before so far in the bubble, but I have to put something in this section and it's hard when you're up 3-0. Did I mention the Celts are up 3-0? I just wanted to make sure you knew that.

- It's a little concerning that the Sixers had 20 offensive rebounds and won the second chance points battle 20-8. That is entirely way too many OREBs. I can't ever remember a team having that many and still losing so the Celts caught a bit of a prayer there. Tobias Harris has 8 by himself! I'm going to need this team to get back to boxing out because if that shit continues against a team that can actually shoot, the Celts are going to get demolished.

- A rough night for Theis offensively, way too many missed bunnies. Actually, it wasn't just Theis. A lot of players on this roster continue to miss easy bunnies. That shit is annoying and was a huge reason why this game was so close. I know that's sort of what the Celts do but that doesn't mean I have to like it.

- If you think I'm going to ignore that Tatum missed FT in the final minutes and not obsess over it despite it not mattering well then you haven't been reading this blog for very long. Make your goddamn FTs.

- Alright, let's just get this out of the way. The officiating was pretty poor for both sides, and I mean that sincerely. The Celts were boned at times with foul calls and the Sixers were boned when it came to 50/50 bang bang plays. That Sixers goaltend was HORRIFIC for the refs to miss and they also had a deflection go against them that was very clearly off Boston.

But they also had a lot of help. We knew heading into this game that Scott Foster was going to do Scott Foster things and that's exactly what happened. The fouls/FTA were undoubtably lob sided to start and that's what kept PHI in the game since they couldn't make a shot. Through the first three quarters it was a 27-14 FTA difference and it surprised nobody.

The thing is, the Celts had to be better about gambling. A lot of their fouls were actually fouls. You can't do that when you also know that Foster is going to do some bullshit on iffy calls. Tatum gambled way too often and it cost him. Theis is never going to get the benefit of the doubt and that didn't change.

The point is, the officiating has to be better. This is the playoffs and we're seeing this happen in almost every game, no matter the series. The quality of play has been so good it's annoying that the officiating is this bad in games that really matter. Adam Silver needs to clean that shit up immediately as we get deeper in the playoffs.

But hey, 3-0 is 3-0. The Sixers as a franchise is in shambles. Their fans are broken. All that talk about the 3-1 season series and look where it got them. They want to use the Simmons excuse but then pretend like Gordon Hayward isn't also out. Things are rough for them because after all that losing this is where they are. I'd feel bad for them but ya know….fuck The Process. Happy for Al though, at least he got the bag.