Welcome to your Weekend WNBA Betting Guide, where we'll be betting and (definitely) winning on the WNBA all season.

After a BLAZING two week stretch I came a bit back down to earth this week with a 4-5 record. Couple of bad beats (shit happens) is all it takes to go from 6-3 to a losing record. But if gambling was easy, everyone would be a winner. It takes hard damn work to win, and we rise and grind betting these WNBA games. And that’s why we end up winning in the end.

Three games on the Friday slate per usual as we begin winding down the regular season.

The second game sees the inconsistent Washington Mystics against the difficult to bet Dallas Wings. Which Dallas team will show up? Who knows. Mystics are 0-5 ATS while Dallas has gone under in 7 of 9. Both teams have trouble scoring. Kiara Leslie, the Mystics Guard, is questionable and that may affect the game. Washington is a slim -2.0 favorite (o161) on the morning line and if you have to bet this, I’d go with Dallas and the Money Line (+105). I like the over in this, too.

(8-3) play the Phoenix Mercury (6-6), with both teams performing well against the spread of late (Minnesota 6-2, Phoenix 6-3). Both teams are reliable overs as well. Minnesota's Odyssey Sims

The final game on the Friday slate should be the best game of the day. The Minnesota Lynx (G) and Rachel Banham (G) are questionable, which means guard play could be an issue. I think that’s why Phoenix is -1.5 (o163). Tough game but injuries should tip a close in favor of the Mercury. I like the over on this too (all three overs tonight TBH).

Like always, I'll update this blog over the weekend, and even though you may hate the WNBA with the same fire that you hate your ex who gave out handies under the bleacher while you rode the pines as a senior on the JV basketball team -- but remember, these women can STACK CASH all day and night if you bet them right.

Last night was a lesson in trusting your gut. In the Minnesota vs Phoenix game, my gut said to take Minnesota and give the points, but I got talked out of it because of some nagging injuries to the Lynx guards. Big mistake. Always trust your gut. Overall, the Sparks won in OT by 8 and screwed me (I had the opening line of -11.5 but I also liked -15) by playing an absolutely awful game. On the plus side, all three overs came through as I said they would, so 4-2 on the night is not a bad way to start the weekend.

Today’s first game may be the best game of the year -- Seattle vs Las Vegas. The two best teams in the WNBA (both on five game winning streaks) tilt on ABC at 3:00 EDT and it should be a great, great game. The Storm opened as a sligh favorite -1.5 and moved to quickly to a 4.5 point favorite. O170.5. Seattle is playing without Sue Bird and the team is not the same without her, and Morgan Tuck is questionable. The Aces are hot and (9-3 ATS in the bubble) while Seattle is 5-0 ATS of late. Tough call here.

The second game pits the Indiana Fever vs the Chicago Sky. The opening line sees Chicago as a -6.5 favorite and the OU167. The line again moved like crazy to -9.5, which makes me feel VERY uneasy. The Sky are hot of late (9-4 in the bubble) and Indiana is injury riddled (Tiffany Mitchell and Stephanie Mavunga both out today). Cheyenne Parker (F) and "Faster Hands than" Diamond DeShields (G) are questionable for the Sky. Fever are coming off a win against the Storm even with the boatload of injuries they have.

The final game pits the New York Liberty vs the Connecticut Sun, with the Sun -12.5 (O162.5) on the opening line (look for it to move). Both teams are HORRIBLE ATS (New York 4-20-1 and the Suns 4-8). In a battle between two dogs, you usually do OK betting on the dog that’s slightly better. In this case, that’s Connecticut. I like the Over in this game, too.

We’ll see you all back here tomorrow. Good luck and go Bet the Chicks!

After a solid 4-2 Friday night, we came back to earth with a 1-2 on Saturday. It happens. A Bird-less Seattle uncharacteristically shat the bed and got dogwalked by Las Vegas 82-74, killing the over by missing so many putbacks, while we took a bit of a bad beat with the Chicago Sky getting a BIZARRE four point play (among other weird calls) to hold on to an 87-76 win over the Fever and that +9.5. We did cash the Connecticut Suns -11.5, as the New York Liberty remain the most consistent bet in all of sports (4-25-1 in their last 30 ATS).

Sunday’s slate begins with the Atlanta Dream against the Minnesota Lynx. This is one of those trap games where the lines will change a lot from opening until tip off. The safe bet in this game is the Over, with both teams reliable (Atlanta 5-1 and the Lynx 7-1 of late). Chennedy Carter is still listed as questionable for the Dream, while Minnesota’s recent injury bug appears over. Minnesota opened at -8.5 and then jumped to -10.5 quickly. The O163.5 is a good bet in this game.

The second game is the Los Angeles Sparks taking on the Dallas Wings. The Wings are just 3-7 in their last 10 overall, and the Sparks are 7-1 ATS of late. This is one of those games that can be easy to overthink. The Sparks opened as -9.5 favorites then dropped slightly to -9, with an O162.5, which I like.

The final weekend game is the Garbage Bowl with the Washington Mystics against the Britany Griner-less Phoenix Mercury. Griner left the WNBA for “personal reasons” and won’t be available to the Mercury for a long time due to quarantine rules when/if she returns. Rough, as she was the center piece of a decent Mercury team. Without her they got their wheels run off Friday night. Phoenix opened at -6.5 and then dropped to -6 where the line seems to have settled. The O166 seems too much in this game.

So that wraps another weekend of Betting the Chicks. Hopefully you made yourself some cash. We’ll see you right back here on Friday! 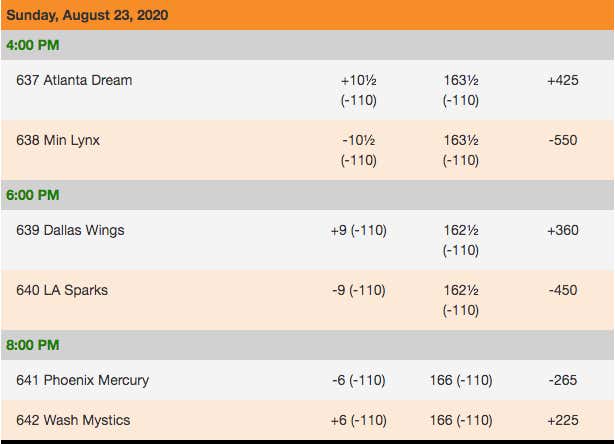