Wildflowers and All the Rest, a “comprehensive” five-CD or nine-LP box set due out October 16th, features the 1994 LP alongside dozens of unreleased tracks, home recordings (like “There Goes Angela (Dream Away)” and the demo of “You Don’t Know How It Feels“), alternate versions and live renditions of Wildflowers tracks.

In addition to the announcement of Wildflowers and All the Rest, Warner Records also shared Petty’s “home recording” version of the album’s title track “Wildflowers.”

The Petty, Rick Rubin and Mike Campbell-produced sessions for Wildflowers yielded enough material for a double-album filled with 25 songs. However, the label advised that Petty pare it down as a single disc, with unused tracks either winding up on Petty’s She’s the One soundtrack or in the archives, like “Somewhere Under Heaven,” which appears in the box set. “I did not remember writing it, recording it, anything,” Petty told Rolling Stone in 2014. “And it was really good — uptempo but very unusual, in some strange time signature.”

In the years prior to his October 2017 death, Petty admitted that restoring Wildflowers to its full glory was a top priority. “I broke through to something else. My personal life came crashing down, and it derailed me for a while. But I was at the top of my game during that record,” Petty said.

The planned 25-song LP is realized on the first two discs of Wildflowers and All the Rest, which adjoins the original 15-song album with the 10-song “All the Rest” containing five previously unreleased tracks. The “Home Recordings” disc finds Petty’s solo workshopping of 15 Wildflowers songs in his home studio, while the “Alternate Versions (Finding Wildflowers)” disc sees Petty and his studio band working toward the final LP. The box set — curated by Tom’s daughters, Adria and Annakim Petty, his wife Dana Petty and Heartbreakers Mike Campbell and Benmont Tench — is rounded out by a collection of 14 live recordings of Wildflowers songs spanning 1995 to 2017.

Tom Petty Week here at the Stool according to Nate and what better way to cap it off than with this long-awaited, MUCH NEEDED, great news.

Most of those wound up on future releases (like "She's The One") but a ton of material got shelved. Until now.

All thanks to Petty's daughters Adria and Annakim and his wife Dana, who calls this release "hours upon hours or PURE SONIC JOY".

For a wife to speak about her husband's work like that (dearly departed or not), must really mean it's good.

And you wanna talk about an album for this to be the case with? Wildflowers man holy shit.

Petty's second "solo" non- Wilbury's album and first of three working with the one and only Rick Rubin (who gives an introduction to the re-release!).

You know all the hits -

Look at this monster fuckin track-list -

All The Rest
1. Something Could Happen
2. Leaving Virginia Alone
3. Climb That Hill Blues
4. Confusion Wheel
5. California
6. Harry Green
7. Hope You Never
8. Somewhere Under Heaven
9. Climb That Hill
10. Hung Up and Overdue

Petty was such a hit machine that he would just give bangers to his friends and other artists. Like "Leave Virginia Alone" for example. A Rod Sterwart smash that Petty just let him have. Can't wait to hear the original version sung by Petty and The Heartbreakers finally.

And the guy recorded everything ON everything so some of these alternate versions should be fuckin incredible. Like his "You Don't Know How It Feels" 8-track demo version -

And I don't have to tell you how amazing it is to hear unreleased music from legends. They gave us a small taste with "There Goes Angela" to help build the excitement. Get your pre-orders in now.

p.s. - the ultimate vinyl set is over-the-top nice and a must-have for any die hard Petty fan. Check this spread out - 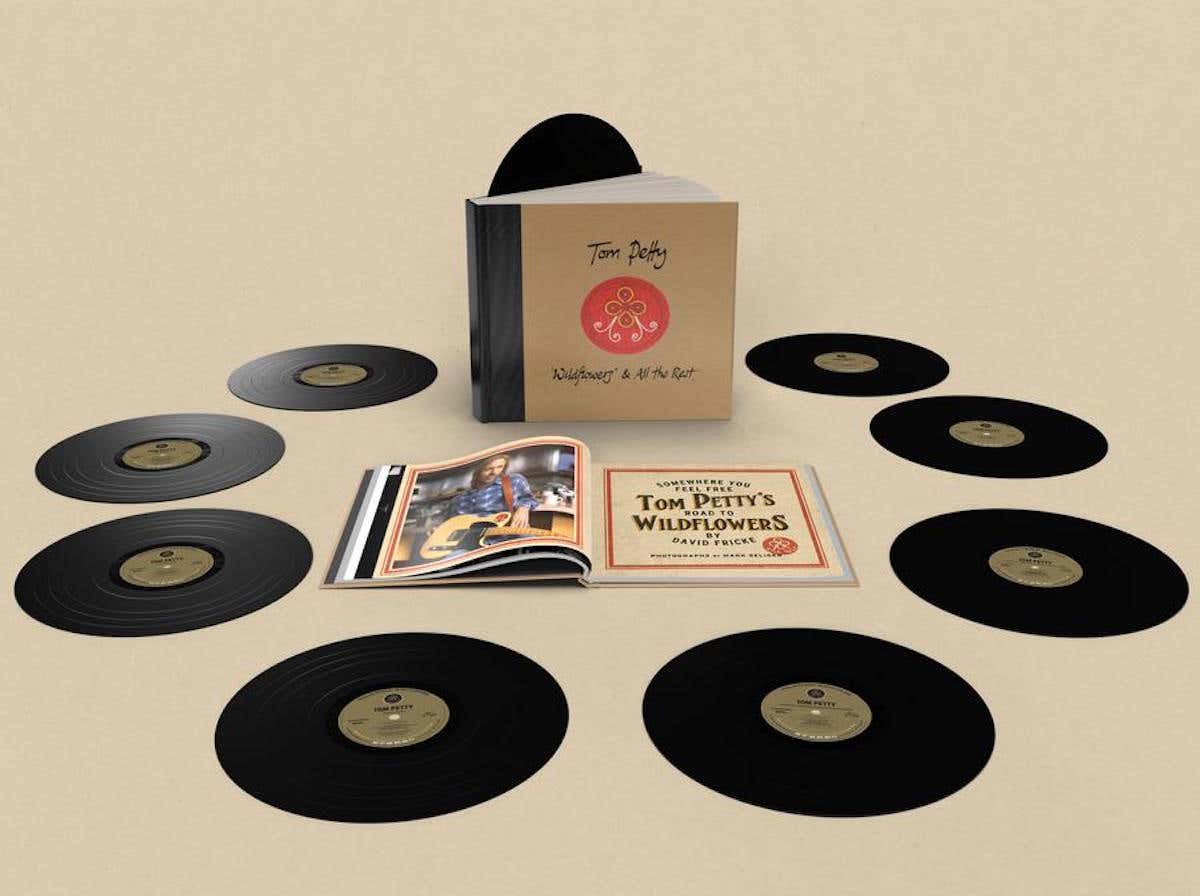 p.p.s. - one of the biggest regrets of my life is missing Petty's last show at Wrigley Field in June of 2017. It started fuckin downpouring a few hours before the show, then let up but was going to again throughout the night. I had field tickets so like a little bitch I passed them on to some friends because I didn't want to stand in the rain all night. I figured "I can just see him next year". I will never forgive myself. Don't ever ever have this mindset! From that point on anytime any artist or group I'm even remotely interested in comes to town and there's a likelihood that they might never tour again (due to breaking up, or dying) I go out of my way to make sure I see them. The real kick in the balls was that I heard it was one of Petty's best shows he ever put on. Shame on me.

Thanks to @thebat05 for putting me on to this recording of Petty singing "Gloria" live at The Fillmore in 1997. Wow