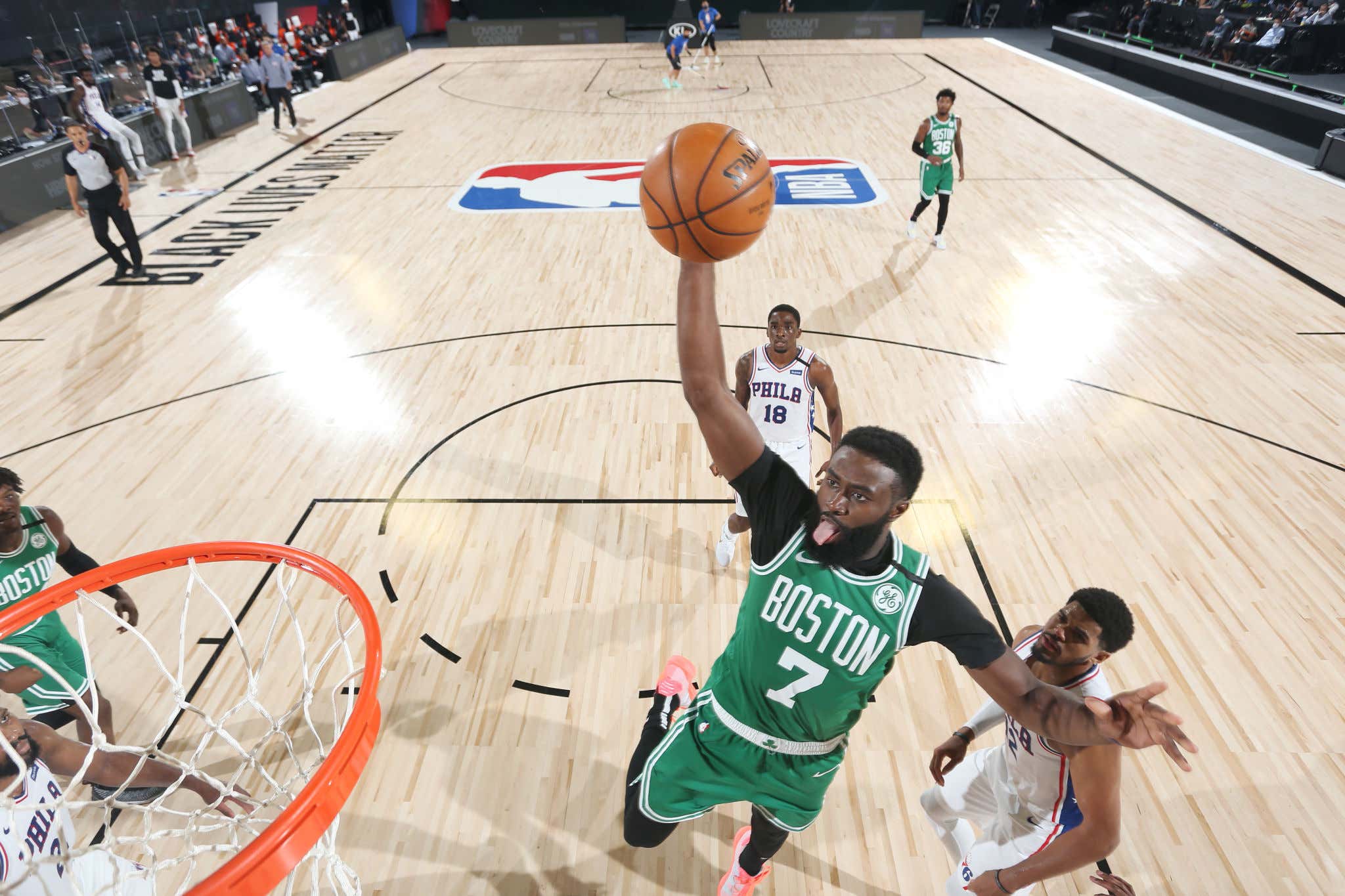 While I think it would be silly to say this series is over, I do think it's fair to say the Celtics have the Sixers on the verge of life support. This was a spirit breaking win. How could it not be? The Celtics looked at the Sixers main adjustments and laughed right in their goddamn face. Inserting Thybulle into the starting lineup, playing more through Embiid to start, none of it mattered. Even with the Sixers starting out on fire, making pretty much everything they threw up to start this game, it STILL didn't matter. That's just demoralizing. The Celts have this team ready to quit and if they get up 3-0 that's exactly what's going to happen.

But yesterday was also a chance for us to see how this team would respond to missing Hayward, someone who had been one of their best players in the bubble. Well, just like they always do, the Hospital Celtics delivered. A lot of talk heading into this series was that the Sixers had the best player. Are we sure that's true? Like are we reaaaaaaaaally sure that's true? I'm not no sure. One star is throwing up empty production, the other is ripping the hearts out of an entire franchise and fanbase every time they lace them up.

I don't want to get ahead of myself here, but this is now the 6th straight win for the Celts regular rotation players. They are playing some great basketball on both ends and it's great to see. Once again though I urge you, let's not look ahead. Do not talk like this series is over. Don't tempt the Basketball Gods. Instead, let's focus on what we learned yesterday and get ready for Game 3.

- Remember how badly the internet slandered Jayson Tatum when he had that 2-18* performance to kick things off in Orlando? Well I hope those tweets were worth it because you woke up a goddamn monster

33/5/5 on 12-20 (8-12) in 30 minutes for Jayson Tatum and honestly he felt more unguardable than that. There was not a damn thing this Sixers team could throw at him that worked, and heading into this game I figured the plan with no Hayward would be an aggressive Tatum. Attack the rim and beat Thybulle north/south. Nope. Tatum instead decided to make it rain from deep. Fine by me!

We all agreed that if Tatum wanted to go up a level, he had to show he was THE GUY in this playoffs. In the bubble he's playing like the top 10 player we saw in February

- While his outside shot still needs to come around, I thought Kemba looked really good.

With no Hayward, it's imperative that Kemba finds a way to be efficient, and for me his 22 points on 50% shooting fits the bill. What we've seen through two games is a situation where Kemba is literally going to be able to get whatever shot he wants with little to no defense in front of him. If Embiid is going to sag off so much, Kemba is going to have a clean look coming off P&R every single time. That's why I'm not so worried about his outside shooting. He's getting clean looks time and time again. Eventually, those are going to fall.

Add to it that he's not turning the ball over and plays with all the energy in the world, so far Kemba's Celtics Playoff Debut has been a positive. The knee looks great, he's as quick as ever with that elite burst, and he's nothing but supportive of the two Jays

Crazy what a difference a year makes when it comes to their postseason point guard play.

- I thought this was another solid night from Brad. He was good with timeouts, he pushed all the right buttons in terms of the rotation, he had this team motivated coming out of the half (33-18 3rd quarter), and he is keeping things simple on the offensive end. It was fair to say he was a question mark heading into the playoffs, but so far so good.

- When do we think the general public will give Jaylen Brown his proper respect?

The man threw up 20/5 in 28 minutes, he plays great defense, he's making his FTs (6-6!!!!), and he is just as important to this team's success as anyone on the roster. You're seeing what having two dominant wings can do to an opposing defense. The Celtics have made Al Horford virtually unplayable in this series. He's another guy that struggled from deep in this game but what I love is that Jaylen didn't let that mess with his mindset. He was right there with Tatum in that disaster first quarter helping keep this team afloat, and then once they got their footing it was game over.

- What a performance from the bench. The fact that Brad unleashed two rookies for over 20 minutes and came out with a playoff win is incredible. Everyone from Romeo to Kanter to Wanamaker to Grant was great

The second unit combined for 41 points, they were all efficient, and Wanamaker (+28), Romeo (+26) and Kanter (+24) helped change the momentum in this game. The biggest thing is the consistency factor, but for their first night without Hayward to get that type of production from the bench was in my opinion about as good as it gets.

I want to single out Grant though. In Game 1 we saw him make all the hustle plays. In Game 2 he did that but then also made a couple threes. These playoffs do not seem like they are too big for him, and if he plays like this he's going to find himself back in the rotation.

- I'm not sure what team I'm watching, but I will not complain about 128 points in regulation on 51/44% splits with 19 3PM. The second unit of guys who can't shoot made more threes than the entire Sixers roster. Think about that.

- We heard so much about the Sixers size and all this bullshit, well the Celts won the rebounding battle 43-39. Were essentially tied in points in the paint, dominated second chance points 15-4, and then were even better in transition, winning fast break points 17-1. That is a beatdown any way you slice it.

- Two lead changes and 1 tie. Dominance ladies and gentlemen. We call that dominance.

- How much do you think it kills Sixers fans that at his best, Joel Embiid is just Tacko Lite?

- Let's just accept the fact that there is not a big man on this roster that is going to contain Embiid. Both Theis and Kanter got worked in this game, but thankfully it doesn't matter if Embiid goes off. He makes some tough shots over good contests, but I'm thinking about down the road how this may impact their playoff path once they play a team with better shooters. The post defense has to get better because right now it's been pretty gross.

- Classic 3-10 start in that first quarter only to get down double digits in a blink of an eye. For any other fanbase that probably freaks you out. For me? Didn't even break a sweat. I know this team, I know that is what they do. It's our way of life. If the Celts don't come out to start a game by shooting like shit, things don't feel normal. Nothing like trading bad threes for easy twos. Love when they do that.

- Someone needs to sit Daniel Theis and remind him that it is very important that he have some balls and take an open three when it is staring him right in the face. If he's not going to let it fly he can't be out there. Having the defense respect that outside shot is crucial to how this whole thing operates. I thought he was flat out afraid to shoot in this game and when he did, it was this weird double clutch bullshit which didn't even come close. Just let it fly with confidence Daniel. You can make top of the key threes, I've seen you do it! Nobody will be mad if you miss, we get mad when you don't even attempt it like you're fucking Ben Simmons or some shit.

- Are the Celts going to slow down Josh Richardson or Shake Milton or are they just going to shoot over 50% every game? Some spotty perimeter defense two games in when it comes to those two. Again I don't care about this series, I care about forming bad habits for future potential series.

- I don't know where else to really put the shooting of Marcus Smart. He went 3-11 (1-7) and I just don't love his entire approach. It feels like he keeps trying to make that knockout punch three which hasn't dropped all series. He had a few possessions offensively where he showed great patience in P&R, and that's where I want him to live. Do more of that and less letting it fly from deep. I know this is just part of the package and I do think Smart can actually make big threes every once in a while, but with no Hayward we need him to adjust his game to a more efficient approach. Nothing we've seen in two games suggests his outside shot is anywhere close to being effective. Switch it up and use your size to get into the paint.

- Kemba only has 1 3PM through two games. That's not great.

- Was it me or was Kanter grabbing his arm on his FTs late in this game? He's fine right? Please? Don't fucking do this to me.

With a 2-0 lead, as long as the Celts don't lose 4 of the next 5 we should be in good shape. This is no time to get comfortable though. I want this team to stay hungry. They need to go for the kill and have just as much focus for the remaining games. These bubble series are weird and can turn in an instant. But as we've seen, if the Celts show up there's basically nothing the Sixers can do. Not even a playoff career high for Joel Embiid mattered. Keep your focus and let's keep this thing rolling.