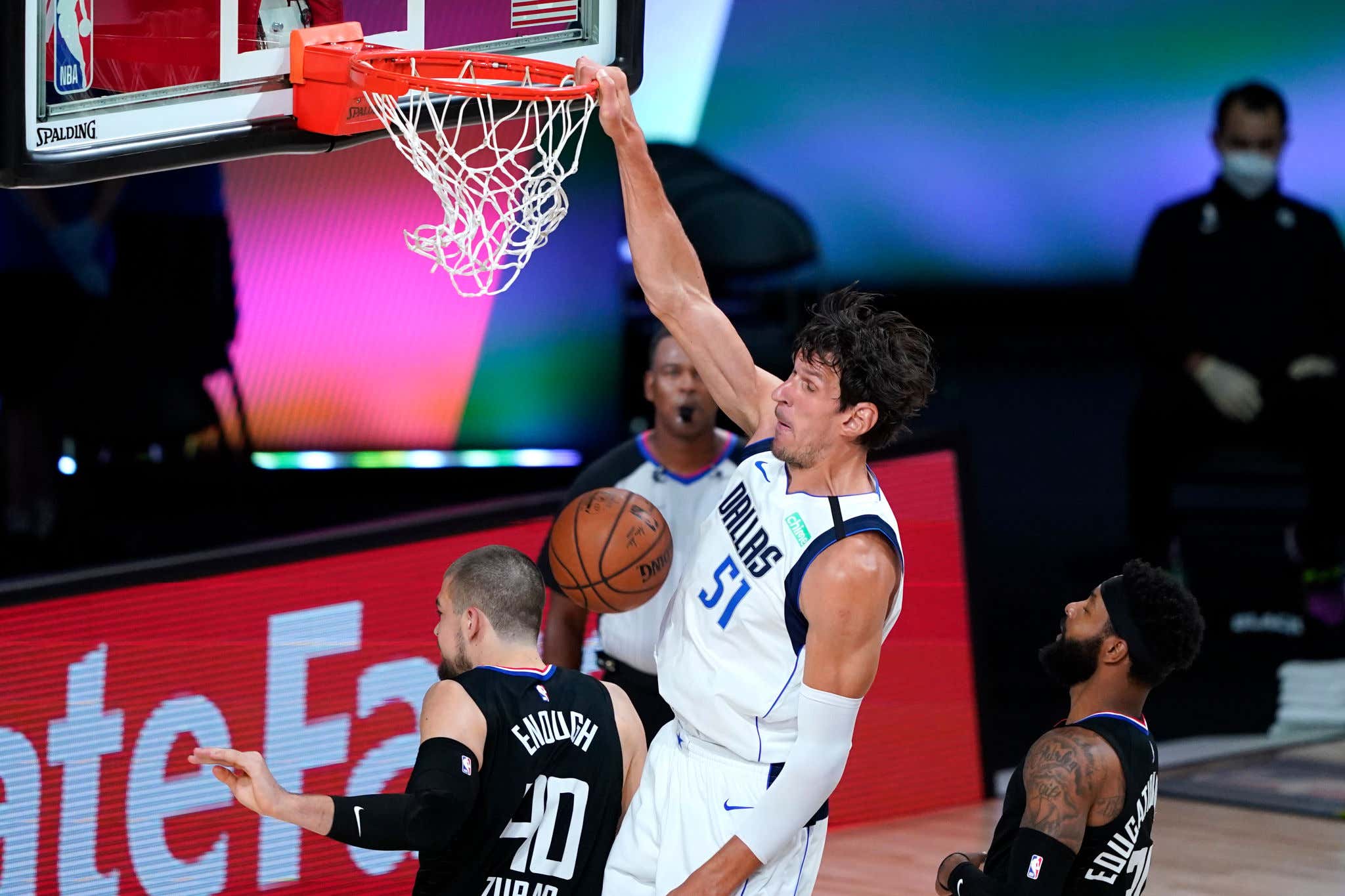 Good morning everybody happy Thursday and welcome back to another edition of Last Night In The NBA where we bring you up to speed on everything that went down from the day before in the Association. Wednesday was the start of our Game 2 slates and I was interested in seeing what adjustments everyone made. There's a huge difference between tying a series up and building yourself a 2-0 lead and in yesterday's batch of games we got a couple of each. While most of the bubble games have been close, a common theme yesterday was mostly blowouts, with only one of the games decided by 5 points or less. As always if you found yourself unable to watch any of the action that's OK, here's what happened.

Give the Nets credit, they did a much better job of not getting down by 30 in about 4 minutes. That's what I call progress! In fact they gave the Raptors all they could handle for 3/4 of this game and very well near pulled out the upset. If we've learned one thing about this Nets group down in the bubble it's that they may not win a whole not, but they are going to play hard and make you earn your win. It's actually pretty remarkable they were in this game despite shooting 38/34% and had 17 TOs. You would think this was a game where Caris LeVert went nuts, but he only had 16 points on 5-22 shooting. That meant the production had to come from somewhere else, and thankfully for BKN other starters showed up

In fact the Nets had a shot on their final possession of the game, unfortunately this happened

that's not great. This is now a series we'll most likely see wrapped up in 4, but I still think this bubble experience was a positive for BKN. Nobody gave them a chance and they played much better than we all thought. That's important for the development of their young pieces.

For TOR, they still need to find a way to get Siakam going. He was better in this game with 19/6, but he still struggled from the field going 6-14. The Raptors could handle that inefficiency mostly because their guards were great

The Raptors had their own issues from deep going just 9-35, but they took care of the basketball and when it came time to win this game they ramped up their defense. I'd say holding BKN to just 19 fourth quarter points is pretty good, and they did that while also shooting 61% from the floor over the final 12 minutes. That's the thing with the Raptors, they don't panic. Even on nights where their star may not have it, they have the depth and the experience to still pull out wins. That's key.

Uhhhhhh who the hell was that wearing a Jazz uniform? I'm still not even totally sure what I witnessed, because I saw a team shoot 51/45% from the floor, make 20 3PM and turn it over just 6 times. Donovan Mitchell went 10-14 from the floor and looked DOMINANT

He's a level of locked in right now that not many players ever experience. He's scoring pretty much any way he wants, doesn't matter if it's attacking the rim, pulling up off a high screen, through these first two games Mitchell has made it clear that the Nuggets do not possess an answer for him. I feel like he's the type of player that always goes up a level in big moments, and make no mistake this was a big game for the Jazz. Can't go down 0-2 in that series. Fortunately for Mitchell, he also had a bunch of secondary scoring help, again something that you don't often see from the Jazz

Jordan Clarkson with the game of his life off the bench with 26 on 9-18 shooting, this game truly got out of hand in the 2nd and 3rd quarter with UTA scoring a total of 77 points. Hell, they only had 20 in the final quarter and still nearly won by 20. Now they get Mike Conley back so this series has 7 written all over it.

For DEN, it's not even like they played poorly offensively! They shot 45/48% themselves! Guys like MPJ and Jokic were great!

their problem came on the other end. Nothing they tried worked. Sometimes you have to just tip your cap to your opponent having a great shooting night, but when you combine that with a game that wasn't exactly great for your depth, that's how blowouts happen. Will Barton we know is out, it doesn't sound like Gary Harris will be back any time soon, so it's on this group to figure out that end of the floor. They need to find a way to contain Mitchell. Drop coverage isn't going to cut it. Considering their largest lead was only 3 in this game, sometimes it's just not your night.

We'll talk about the Celts in their normal blog so instead let's focus here on the Sixers. I mean what more can you say than YIKES. Their Game 2 adjustments could not have had less of an impact. They started Matisse Thybulle in hopes he could shut down Jayson Tatum, Well, Tatum had an efficient 33 and was 3-4 for 10 points while being guarded by Thybulle. That didn't work. They then thought maybe just giving it to Embiid more would be the answer. He was dominant, but it didn't even come close to mattering. He once again ran out of gas and was a non factor for the entire second half. He's dominating the first quarter, I'll give him that.

But as a team? The Sixers look broken. Another rough shooting night going 41/25%, they are simply not getting anything from their two other max players. Tobias Harris and his 4-15 might be the most hated man in Philly after Al Horford and his huge 4/2 performance in 23 minutes.

They continue to allow both Kemba Walker and Jayson Tatum to step into whatever shot they want coming out of P&R because Embiid is dropping so low, and not once did they decide to maybe switch it up. That's on Brett Brown. But when Embiid has only 12 second half points despite leading the team in FGA, Tobias Harris and Horford combine for 2 FGM, no shit you're going to get blown the fuck out. Watching them play, other than dumping it down to Embiid, what is the Sixers offense? What's the point of doing that if you aren't going to surround Embiid with legit shooting? You combine that with zero defense being played and I'd say things look pretty terrible. The worst part is, this was Year 1 of the Harris/Horford deals. Barring something crazy, this is the core for the foreseeable future. All that losing just to end up here? Man.

How mad are Mavs fans right now? They should be up 2-0 in this series if not for the screw job in Game 1. That's a fact. They have shown that they can absolutely hang with this Clippers team and this is another series that has the look of one that will go the distance. A huge part of that is because Luka is out here making history every night he steps on the floor

and who would have thought that being allowed to actually play Porzingis would have a positive impact. Guys is a unicorn for a reason

But we know about those two. For the Mavs to win this series they need the other guys to step up and that's exactly what happened in Game 2. Three players off the Mavs bench with at least 13 points, all were extremely efficient

and as a team they shot 50/44%. That shouldn't come as a surprise, the Mavs had the best offense in the league this year. Their defense still would worry me, but as long as they aren't getting key guys ejected for bullshit reasons, they can hang with anybody. It's clear not even the defensive wings of the Clippers can slow down Luka, and that could lead to a rather shocking upset.

For LAC, poor Kawhi man. Well actually fuck that. He could have had a dynasty in TOR and instead bolted to join forced with Playoff P. I guess nobody told him Playoff P kinda stinks. Another great Kawhi postseason performance wasted

Maybe it's just me, but when I watch the Clippers they just give off this vibe that they feel like they can simply show up and teams will bow down to them. A level of entitlement if you will. There's just something off about them so far in this series. But for a team that is supposed to be clamps on defense to give up 29, 32, 37, and 29 points is pretty rough. '

They never led, it was never tied, this was a wire to wire beatdown and in my opinion a tone setting win by the Mavs. They aren't afraid of the big bad Clippers and if the bubble has taught us anything it's that everyone is pretty much in the same boat. You don't come out right, you can get your ass beat.

And that's it! You are now caught up with everything that went down yesterday in the NBA. We're back with another slate of Game 2s today, so I would imagine it'll be another day filled with drama. Have a great Thursday!