I'll be honest with you guys, I didn't know quite how to start this blog or blog series about the Blackhawks. There's so much to dissect that it needs to be broken down in sections. You win and as a team and you certainly lose as a team and impossible to tell the story of the Blackhawks' demise with just one angle. There's plenty of blame to go around so I decided to close my eyes and pick someone who I am intensely angry with at this very moment...Jeremy Colliton

The only place to start is at the beginning. Let's go back to Jeremy Colliton's introductory press conference. There were a few things we were told as to why the Blackhawks made the change from Joel Quenneville to Jeremy Colliton

I believe it is in the best interests of the Blackhawks organization. We need to maximize each and every opportunity with our playoff goals in mind and create continued growth and development throughout our roster at the same time.–Stan Bowman

Looking back I've never been more enraged by two sentences. The idea that the Blackhawks were going to maximize each and every opportunity with their playoff goals in mind by bringing in a guy with roughly 18 months of coaching experience including zero at the NHL level was ALWAYS terrible logic. So terrible that I don't even want to describe it as logical. The second part of that sentence "create continued growth and development throughout our roster at the same time".

That feeds into the narrative that Joel Quenneville wasn't good with young players. That is a fucking LIE. Kane, Toews, Keith, Seabrook, Shaw, Leddy, Burish, Byfuglien, Versteeg, etc etc etc. ALL of those guys were young when Joel took over. All of them heap praise on Joel for their development. Andrew Shaw was JUST on Spittin Chiclets a couple weeks ago and said that without Joel Quenneville he wouldn't have been able to become an NHL regular.

In regards to Colliton's ability to develop young players…has ANYONE taken a step forward on account of working with young Jeremy? Let's start with our former beautiful boy, Henri Jokiharju. The kid who made the team out of camp and was a true bright spot at the start of the year under Joel Quenneville. Somehow he ended up in Colliton's dog house, then Rockford, then Finland and then Buffalo where he got picked up by another awesome coach in Ralph Krueger who loves him and had him playing big minutes, dressing every game, and seeing time on special teams. I am sure people will question me saying that Ralph Krueger is an awesome coach. First year in Buffalo wasn't great but he gave birth to Swiss hockey structure that made me a SHIT ton of money in both the 2010 and 2014 Olympics 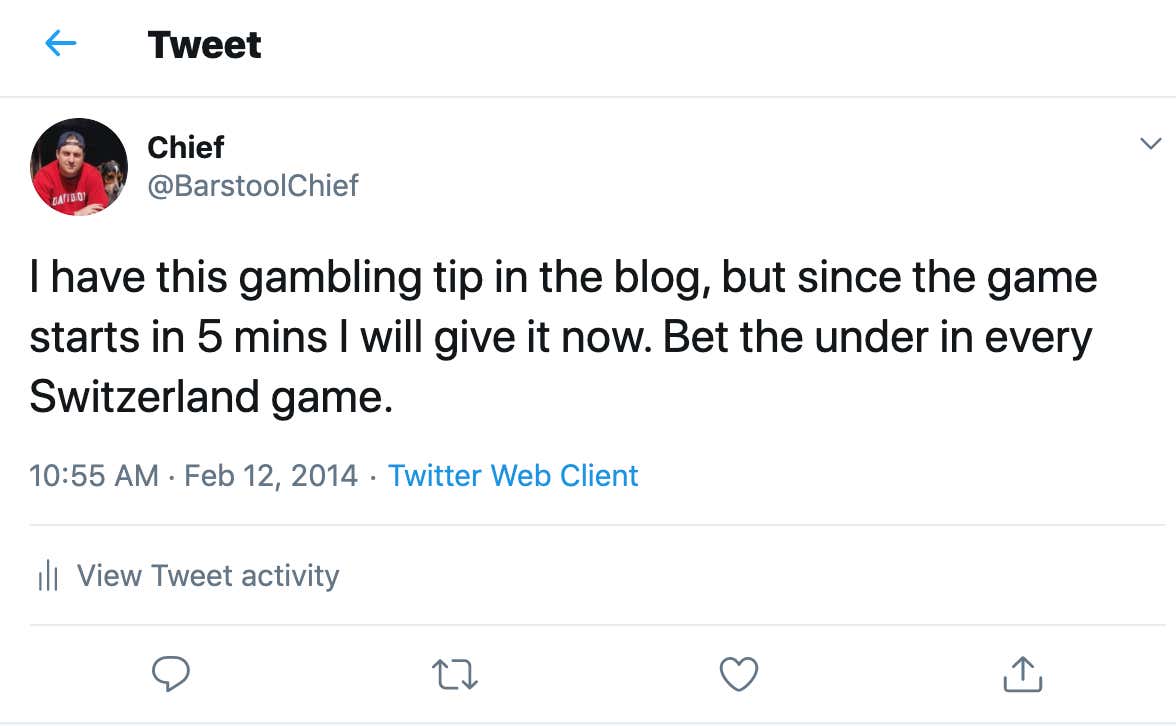 I've been following him for a decade. He's a real coach with real experience and the ability to evaluate talent and he likes young Henri. Meanwhile in Chicago, Colliton and his staff gave Alex Nylander every chance in the world to turn into a capable pro at age 21. It started with him getting time with Jonathan Toews on the top line which led to Nylander having a stretch where he was scoreless in 30 of 31 games. Then he was given a chance with Patrick Kane in the middle of the year which resulted in basically no growth and minimal production. And it finally ended with Nylander being scratched with the season on the line because even Jeremy Colliton recognized that he couldn't help the team win. Not scratched for veteran coming back from injury. No, he was scratched for John Quenneville. A guy who has a remarkable 2 goals in 42 NHL games.

I want to stay on the theme of this blog which is "everything we were told about Jeremy Colliton was bullshit", but this feels like a natural time to talk about the decision not only to dress John Quenneville last night, but play him with Jonathan Toews and Kubalik the entire night. The evidence was there early on that John Quenneville wasn't helping and didn't belong. His stat line looked like this

Not all of that falls on John Quenneville. It is a team game, but he did make some TERRIBLE decisions with the puck. He was a liability. The only two positive plays I saw Quenneville make were two defensive zone plays. He was not good. Colliton said otherwise.

"we liked him during the season". Oh really? Is that why you sent him to Rockford after a grand total of 9 games played and never recalled him? The Blackhawks had plenty of chances to recall Quenneville during the year and instead they called up Highmore, Sikura, Hagel, and Wedin.

And down 1 goal with the entire season on the line and under 3 minutes Jeremy Colliton went to Quenneville AGAIN. I don't care if it was supposed to be his shift. I don't care if everyone else was gassed. You know who would be better than the guy with 2 career NHL goals in that situation? Literally anyone. I would rather have Adam Boqvist play wing on that shift. But hey, the guy with 2 career goals "has a great shot". All the decision to put Quenneville in Saad's place there with Toews and Kubalik was sink your top line. Absolutely atrocious decision. Then Colliton had the audacity to get up there and say he thought he played well. He's either lying or an idiot. It's not like Jeremy is averse to throwing his players under the bus either in a post game press conference either. He does it ALL the time. He just didn't do it in that moment because it'd make him look bad. When it's his players like Keith who deserve a statue then it's fine I guess

Speaking of Adam Boqvist…it's hard to say that Colliton has done a great job developing him into an NHL player this season as well. Another guy that Colliton decided couldn't help him at times in this series and was both benched during games and was also completely scratched in favor of Lucas Carlsson at one point in the series. Boqvist has a TON of natural talent. He has one of the best snap shots I've ever seen from a defenseman. He is a tremendous skater. He's great with the puck on his stick. And yet…we didn't see any of those traits on display consistently from Boqvist this year. Those are the things that made him a top pick. I know Boqvist is a young player. He's only 20. Even though we've see a TON of young defensemen across the league make impacts lately(McAvoy, Makar, Hughes, Heiskanen, etc) it's not fair to expect a kid who isn't physically mature to be able to dominate the way those other do. We saw Boqvist get bullied all the time. I can understand and accept that as a reality of a young, skinny, defensemen who doesn't have the body strength required to play at a high level in the playoffs. That wasn't the full story though. Boqvist added nothing to the team offensively. He also was ALWAYS out of position. Always. You'd like a guy who can skate as well as Boqvist would be coached up well enough over the course of a year that he would at least be able to defend in transition with his feet and an active stick. We rarely saw that. Boqvist was thrown to the wolves this year. That was a choice made by Stan when he traded Jokiharju in part to clear a path for Boqvist. He wasn't ready. He also wasn't developed.

Boqvist isn't the only guy who is lost defensively though. That seems to be a team wide issue and has been the entire time. The Blackhawks aren't the best team in the league, but there isn't a group of pros in the world who should be as bad as they are defensively. Duncan Keith is still really fucking good and active. Murphy knows what he's doing. de Haan is a pro's pro defenseman. Olli Maata has won two Cups. Toews won a Selke. Saad is responsible. Kane is a well-rounded player now. Overall, the talent and depth isn't there, but this is a strategic issue, a communication issue, or an execution issue. Or likely all three. This group does not have house league players 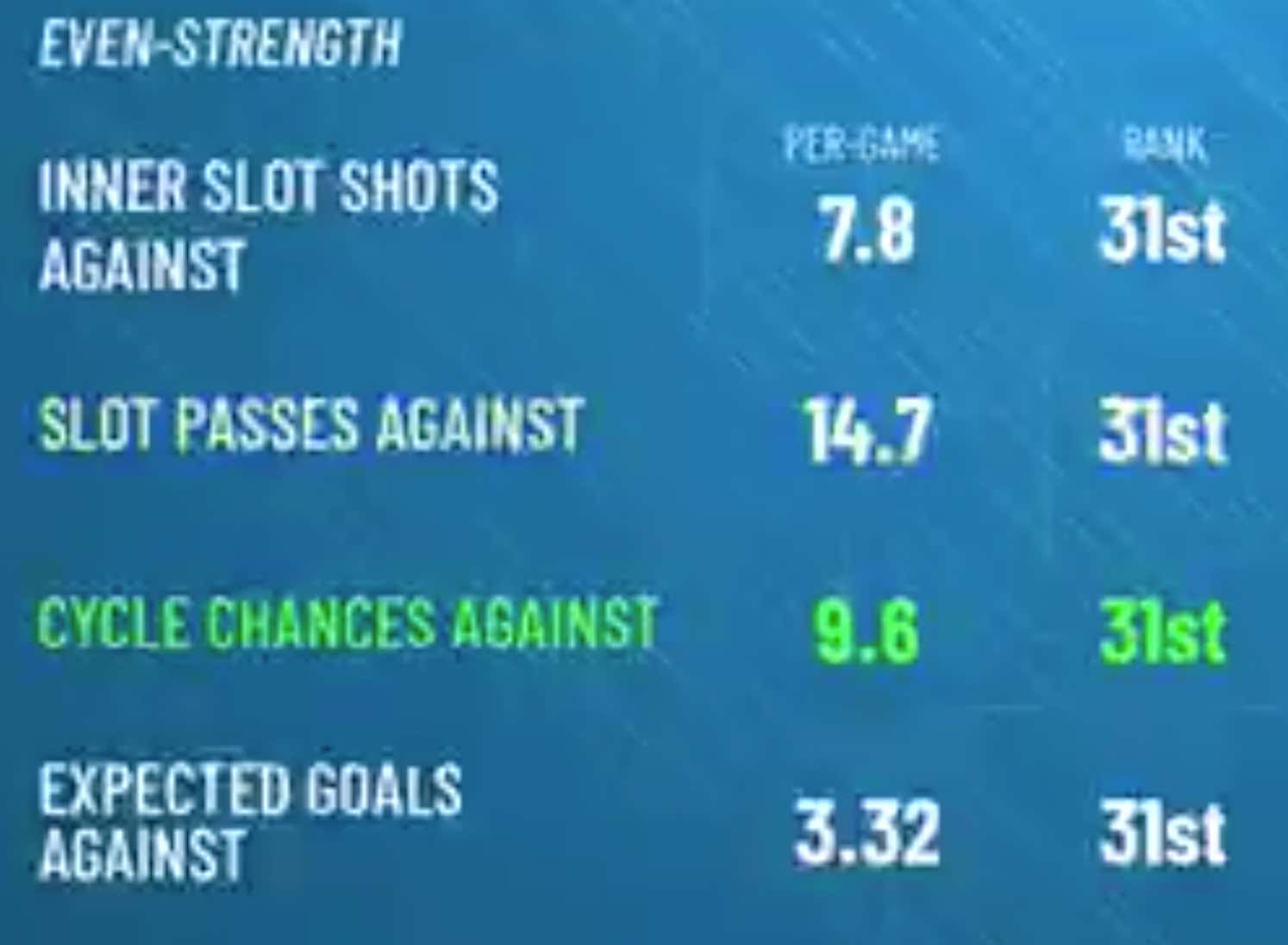 Often times, teams that lack talent can make up for it with a great plan, playing hard, and playing together. The Blackhawks were never able to do that under Colliton. We were told that this year was going to be different. That Jeremy Colliton finally was going to be able to implement HIS system with a full training camp and an improved roster. Colliton worked between April and September getting ready for the season. Stan's boy wonder decided to go with…a man-to-man system defensively to start the season

A team that has guys like Seabrook and Maatta who aren't quick and young centers like Dach and Strome, and a ton of young players in general should NEVER be playing man. Man is fucking hard. It makes it difficult to cover for your teammates because you don't always have a good idea of where the puck is. You are naturally running all around the zone which makes it difficult for break out pass outlets to be predictable when you do actually get the puck. And when you do actually get possession and exit your own zone it can often be hard to have proper puck support through the neutral zone which forces you to play dump and chase. That is why the Blackhawks started the season in the shitter…coaching. Then they changed things up on the fly and got incrementally better as the year went along. They got good enough to…be sellers at the deadline and finish in fucking 12th place in the Western Conference.

I have two friends(not to brag) who work for NHL organizations as video coaches. During the game last night I asked them what the Blackhawks were doing defensively in their own zone. Neither of them could figure it out. Two guys who watch hockey tape for a living to pick up on trends and systems and the Blackhawks were such a disaster that they couldn't figure it out. The only reason the Blackhawks didn't finish dead last under Colliton this year was because of ELITE goaltending from both Crawford and Lehner and tremendous leadership by the core. The Hawks played fucking hard. They never quit. The top guys did enough top things to make the series and large stretches of the season competitive, but they were seriously hamstrung by a having a neophyte behind the bench.

These are just observations and opinions of a blogger. I don't know Jeremy Colliton as a person. I am not in the locker room. At some point though it becomes obvious. Colliton is a problem. He's not the only problem, but he held the team back this year by not being able to develop his players and communicate. He deserves to be fired. He might get another job some day. In fact I would almost guarantee it. And maybe he will learn from this failed tenure in Chicago. And make no mistake, this was a failure. He made his best players worse, and his worst players abysmal. It's time to move on.