(is this the most badass pic ever?)

The saying goes "don't bring a knife to a gunfight" (sidebar- not to be that guy and go sidebar on you in the first sentence of a blog but did you know the origin of this idiom is racist?

The origin is from the movie The Untouchables (1987) where Malone, the Sean Connery character, says, “Trust a wop to bring a knife to a gunfight” as he guns down a knife-wielding adversary. The same words, or similar, have been used in over twenty movies since. The Untouchables was based on the book of the same name written by Oscar Fraley in 1957, but the idiom does not appear in the book. The authorship, therefore, must go David Mamet, who wrote the screenplay for the movie but he may have heard the expression before he included it in his screenplay.

Anyway, the saying "don't bring a knife to a gunfight" has never been more apropos than referencing bringing a regular squirt gun to a fight against the one and only Super Soaker.

Kids today have no clue about many things, but they really have zero clue when it comes to what we were working with before the introduction of the Super Soaker.

Take a look you little fuckers. 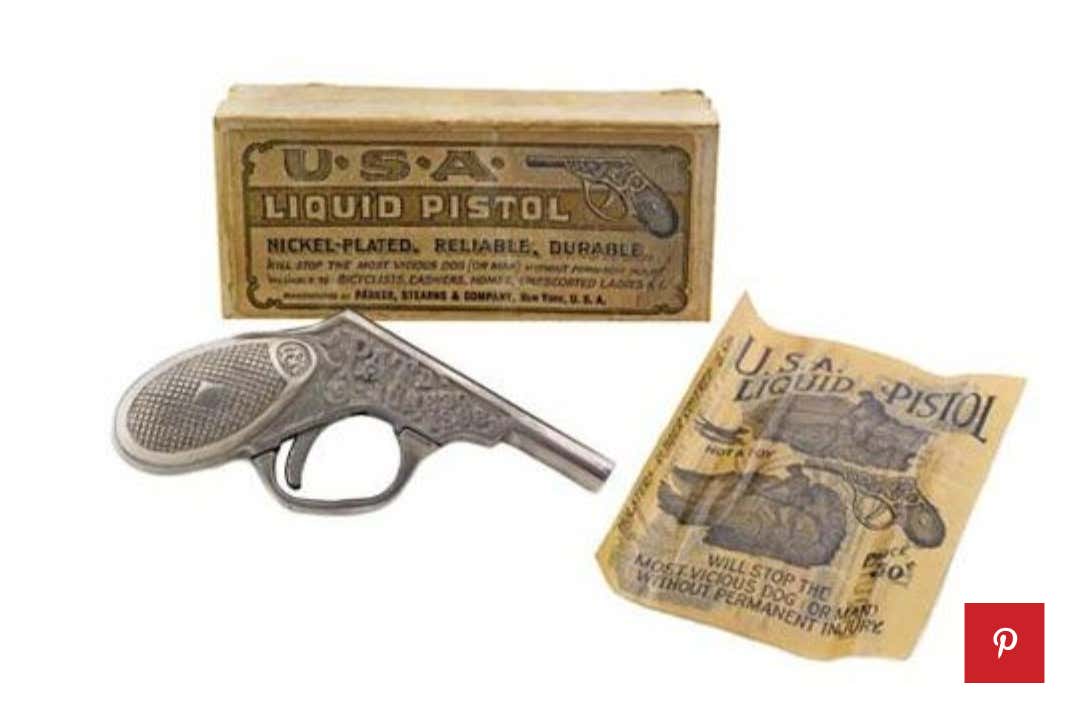 Just kidding. I'm not as old as Jerry.

But look at this bullshit - 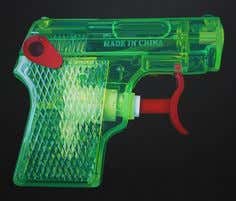 They barely squirt further than your baby dick could piss so you basically had to fight hand to hand combat style to inflict any damage, which meant you were suffering a ton as well.

The only way you were winning a fight with one of these pieces of shit was if your enemy ran out of water. Which wasn't uncommon as they held a thimble full, and were very prone to leak at the extremely cheap made in China plastic seams.

Next came these syringe looking things.

Like an archer's bow, these were lethal from a long distance and gave you a full, steady-stream, but with one caveat; you had to be standing in a pool or have a standing body of water close by to use it.

So it was progress, but it still had many limitations.

Then, on one fine day in 1990 a NASA engineer by the name of Lonnie Johnson teamed up with little-known toy company Laramie to change the game forever.

As the story goes -

Mental Floss - In 1982, NASA engineer and spare-time inventor Lonnie Johnson was working on his latest creation — a cooling pump that used water instead of Freon. He had a custom nozzle hooked up to his bathroom sink, and when he turned the water on, it fired a stream across the room. He immediately thought, “This would make a great water gun!”

So Johnson made a prototype gun out of Plexiglas with room for an air pressure chamber and water reservoir inside. To fire the gun, you pumped air into the pressure chamber with an external piston, then pushed a release valve, allowing some of the compressed air to escape, which expelled the water down the barrel. His six-year old daughter and her friends loved it, so Johnson started to look for a company to produce it.

Johnson first approached Daisy, famous for their BB guns, in 1985, and they were interested. However, the project never really got off the ground, so he decided to try his luck with LJN Toys, whose Entertech brand of battery-operated water guns were popular at the time. They, too, started to develop Johnson’s idea, but before the gun could be produced, the company, and the toy gun industry at large, ran into trouble.

In 1988 criminals were using toy guns in crimes because they were simple to get and could easily fool a terrified victim. This created a deluge of political debate that eventually led to regulations requiring all toy guns either have a bright orange barrel or feature an unrealistic color scheme.

With all the bad press, Entertech's sales took a nosedive and LJN was soon acquired by Acclaim Entertainment who phased out toy manufacturing to focus on video games. By 1989, Entertech was gone, leaving Johnson on his own once again.

So the Super Soaker (Power Drencher) was literally invented by a genius.

Which should be no surprise at all.

The time spent with Entertech was not wasted, though. Johnson tweaked his gun's design by moving the water reservoir from inside to a separate container on top, using a 2-liter soda bottle on his rebuilt PVC pipe prototype. This small change increased the amount of “ammo” available with every refill, but it also made it much cheaper to build the gun, which he hoped would reduce roadblocks to production.

In 1989 Larami Toys, another water gun maker, became interested in Johnson's design when he wowed the company president by accurately shooting paper cups off a table from across the room. Johnson began working closely with Larami product developer Bruce D’Andrade to iron out wrinkles in the gun’s design, and, finally, in 1990, the “Power Drencher” water gun was released by Larami.

However, with very little advertising, the Power Drencher saw very few sales. So the following year, they retooled the marketing, including a name change to “Super Soaker,” and launched a television advertising campaign. Sales skyrocketed to 2 million guns in 1991 alone. Shortly after, the original Power Drencher became the “Super Soaker 50,” and was just one of many models available with different levels of water capacity and power.

As well as the original patent -

Here's the very first model to hit store shelves in 1990

And then here was the rebooted and rebranded model that flew off shelves and every single kid in America had in 1991.

These things were crazy hot in the streets.

Their commercials came on almost every commercial block during Ninja

Question - has there ever been a better marketing campaign? Forget Apple, forget Nike. All you needed as a kid was to see that kid come out of the house in the leather jacket and spiked hair looking like the Terminator blasting his enemies and pissing off his mom and you instantly knew you needed a Super Soaker. The Blues Brothers one wasn't too shabby either.

Also, Michael Jackson was one of it's biggest fans and free endorsers. Who better right?

By Super Soaker’s 10th anniversary, more than 200 million guns had been sold, to the tune of $400 million in sales revenue. Toy maker Hasbro absorbed Larami in 2002, but they continue to crank out new Super Soakers every year under the Nerf product line. Since their introduction over 20 years ago, there have been approximately 175 Super Soaker models released, (LOL) giving kids and adults alike a variety of ways to wage watery warfare.

Some of the other more ridiculous models included -

Not sure what sick puppy devised this model that shot a white ooze all over its victims. Epstein probably. 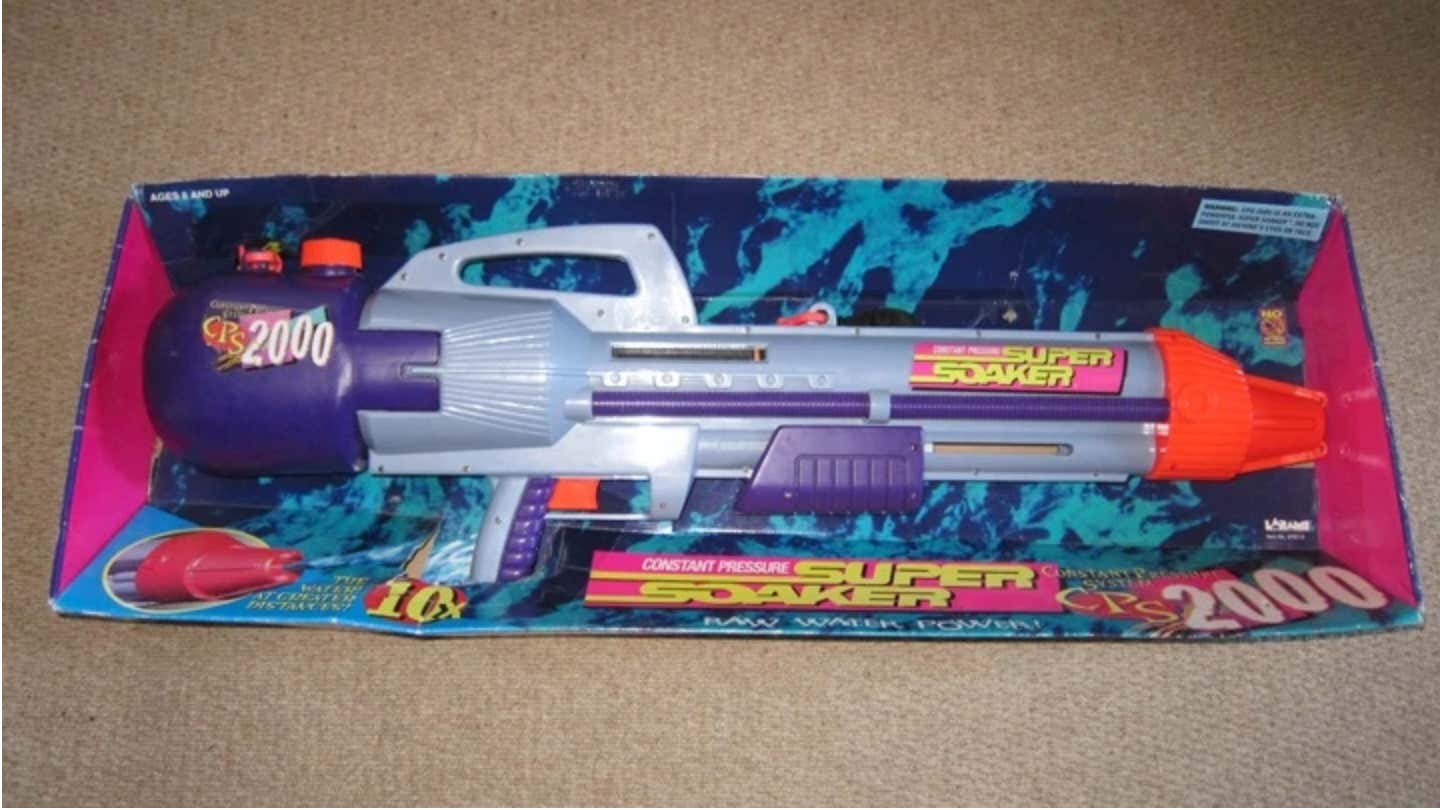 This 1-3-5 model was basically an assault rifle complete with shoulder strap. 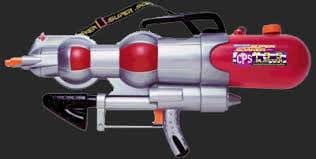 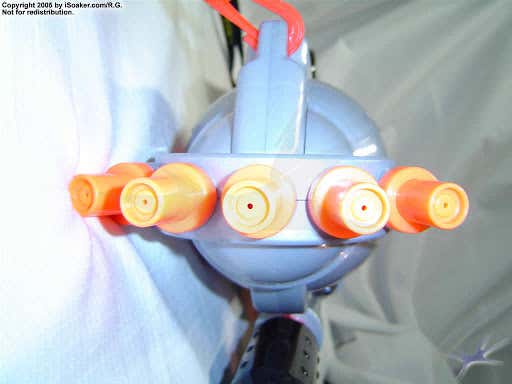 ridiculous. But not as ridiculous as this model with a fuckin tanker you wore on your back. 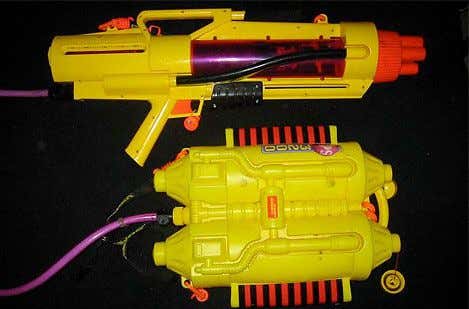 Nerf just brought back three Super Soaker models for the anniversary this year - the XP100, 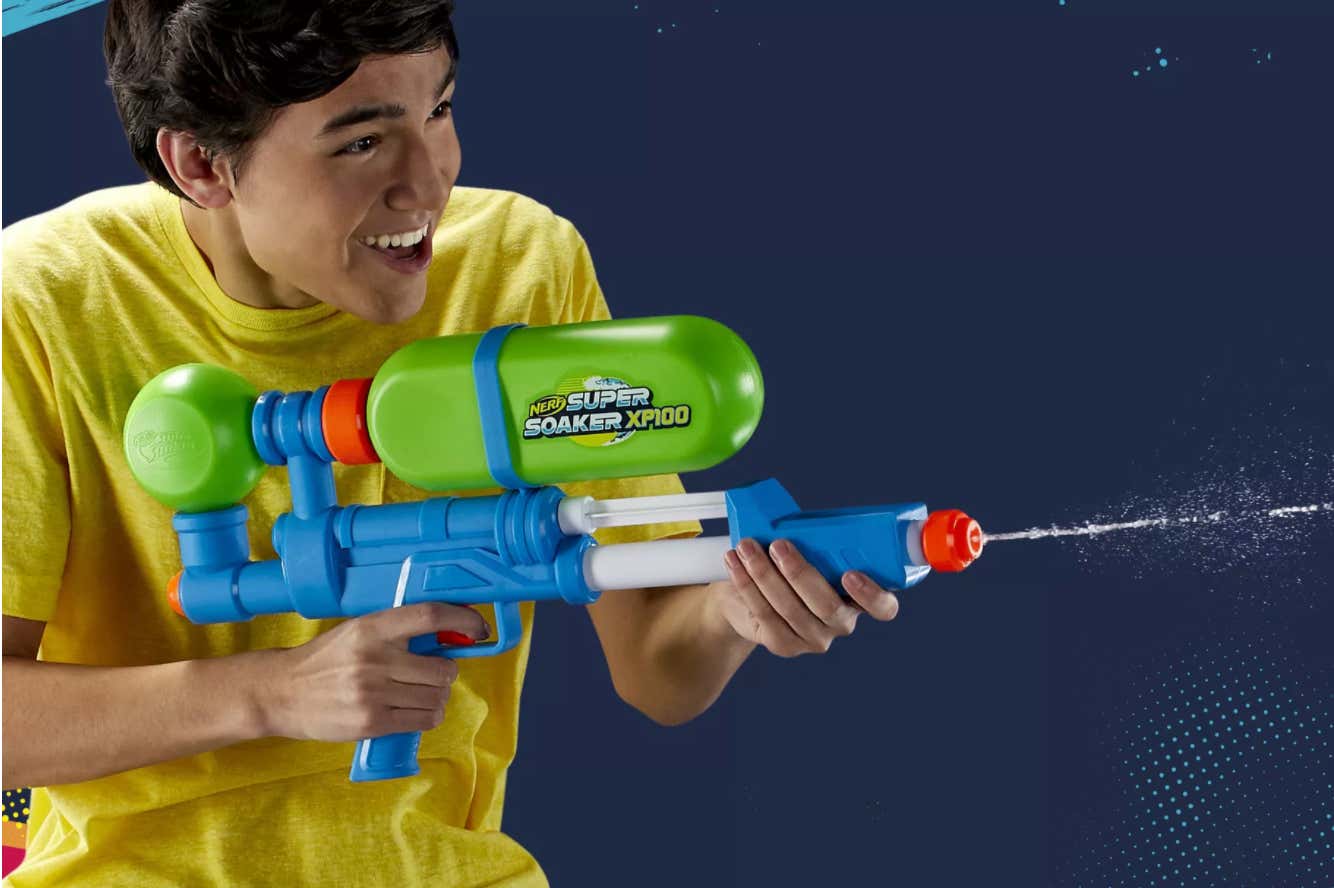 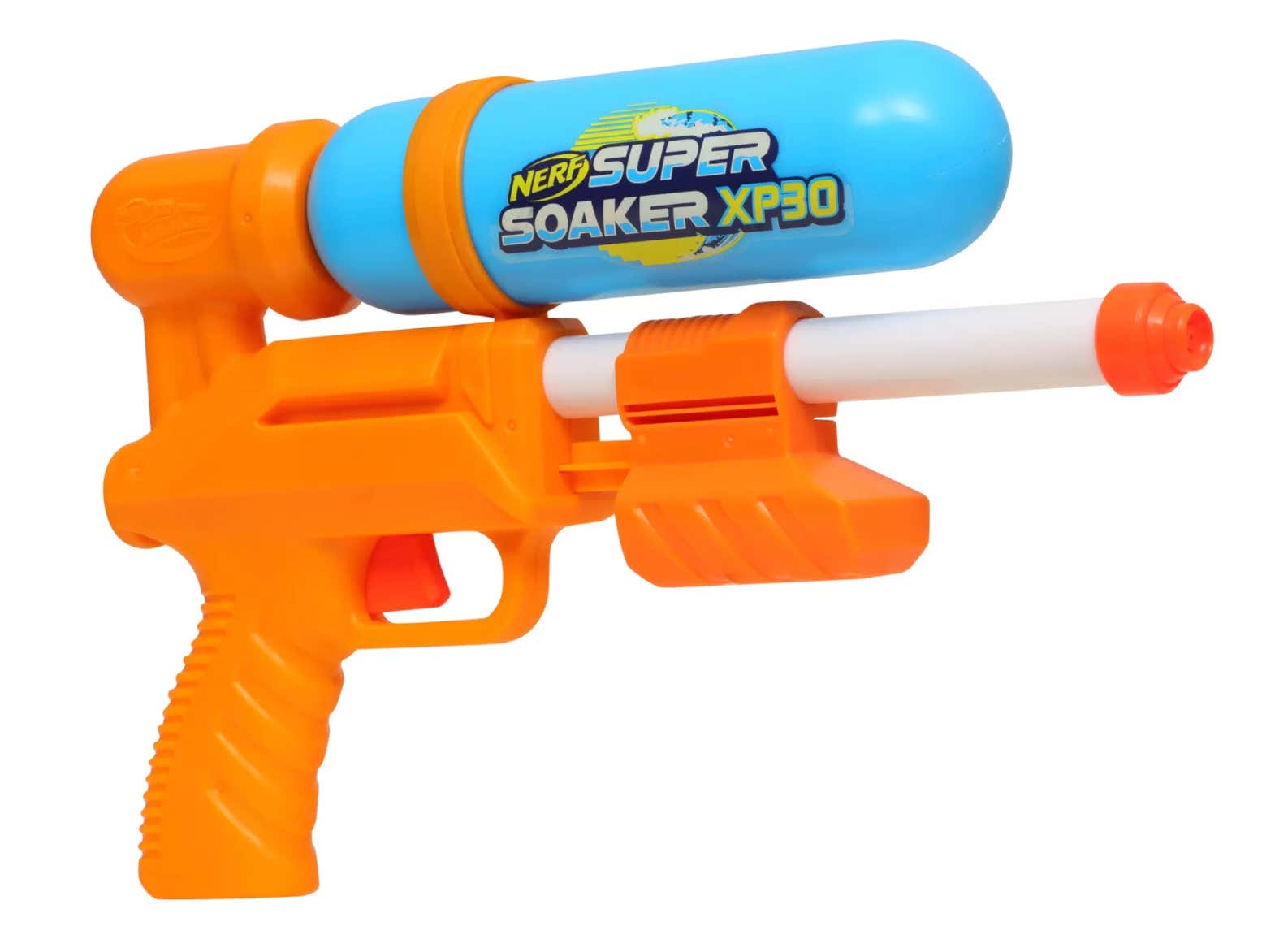 So from all kids of the 90s, THANK YOU TO LONNIE JOHNSON. You're a great American and changed millions of kids lives for the better.

p.s. - I was a real shitbag little kid and I hung out with even bigger shitbags. My one friend John used to fight everybody under the sun. He lived to instigate shit with other kids. Usually older and bigger. This one sick fuck filled his super soaker up with piss and got John real bad with it. I can still hear him and his friends howling with laughter. So John went home and filled his super soaker bottle up with windex. He drove by the crew on his bike, hopped off and hosed them down head to toe. Got all in their eyes and mouths. They thought one of the kids was going to go blind in one eye. They all ended up being ok. Was really messed up at the time and he got in a ton of shit for it but kind of funny looking back on it.

A few housekeeping notes to end on a great note -

This is a dope cause and organization -

For people seriously interested in this, there's a GREAT read on the oral history of it done by Mel Magazine here-