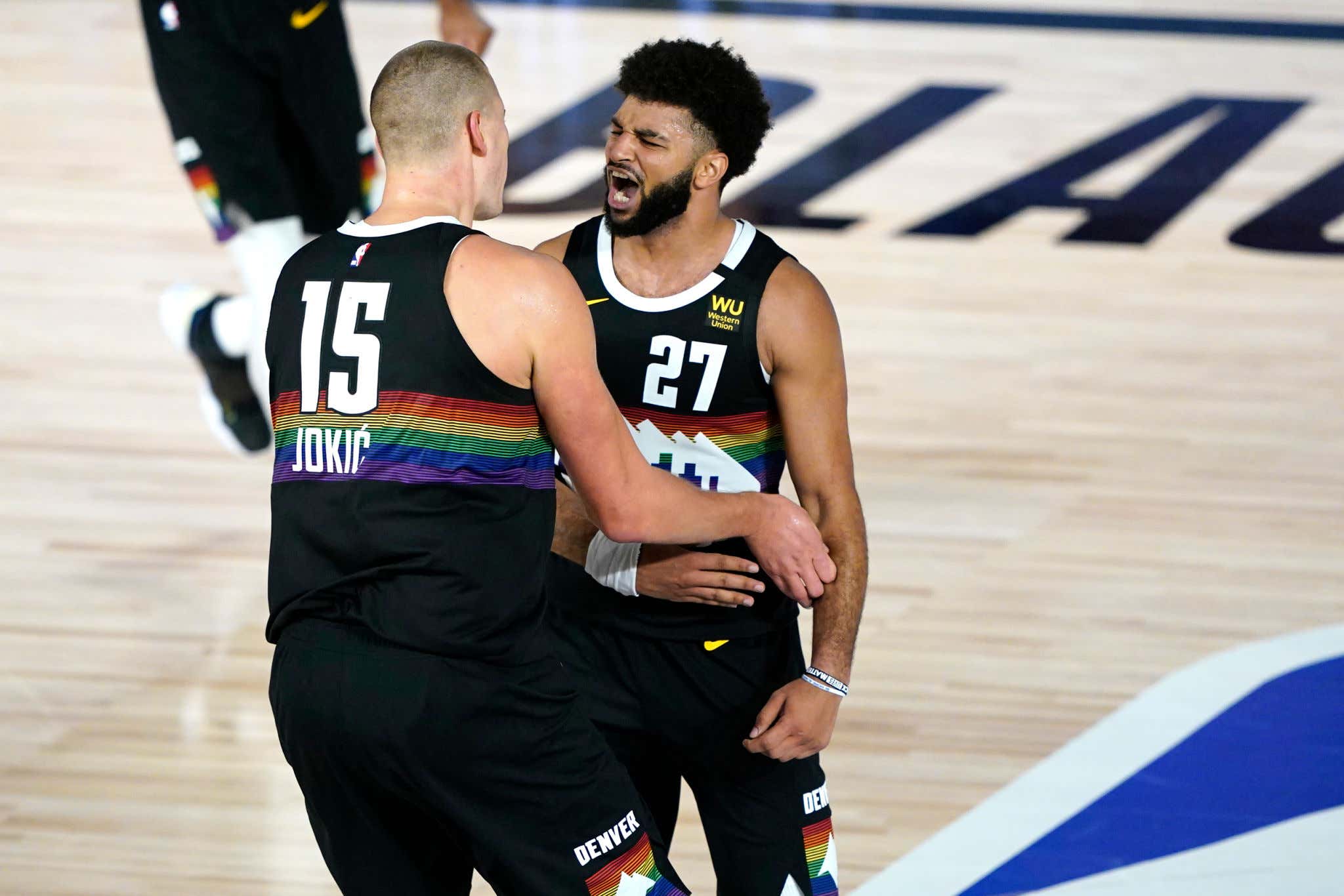 If the first two days were any indication of what was in store for these bubble playoffs, I cannot wait until we get today's slate of Game 2s. For me, this is where the fun really starts because now it's all about adjustments. In Game 1 you're feeling each other out, see what rotations work, see what matchups you want to exploit or need to improve, things like that. In Game 2 it's about putting those adjustments into action and then seeing the other team make adjustments to those adjustments. Whole lot of adjusting going on in Game 2s. Have I said the word "adjustment" enough? Only time will tell, but you get the idea.

Game 2s are important because they can be a swing game in certain series. Tie things up and you feel great about yourself moving forward. But fall into a 2 game hole, you then have to win 4 of the next 5 games to win the series. That feels pretty unlikely considering there is no travel and no home court. So you could argue today is a pretty important day for a number of teams out there. Let's break it all down in preparation for the first game of the day.

Big thing for the Nets this time around is don't get down by 30 in about 15 seconds. You get down by double digits early against this Raptors team, they are too deep and too talented to blow that shit. They were 23-10 in games decided by 10 points or more. You can't really rely on TLC going out and dropping 26 points and making 6 3PM, so it's important that the Nets find a way to get Caris LeVert some easy looks early. He's clearly their best player, he's been playing well in the bubble, but he struggled going just 5-14 in the first meeting. Find ways to run high P&R or something and get him into the paint where he has shown he can flourish. At the same time, none of that will matter if the Nets don't figure out a way to contain the Toronto guards, mainly Fred VanVleet. The Nets didn't defend the perimeter at all in Game 1 and it hurt to the tune of 22 3PM for the Raptors. They may not have the talent to stack up, but they can certainly play hard and have shown they can beat any team on any given night in the bubble. Show up on the defensive end and maybe this one is competitive.

For TOR, your biggest adjustment is finding a way to get Pascal Siakam going. It may not matter for this series, but it for sure matters moving forward. He just hasn't been the same since the restart, he shot just 4-13 in Game 1, and as their best player he needs to be a whole lot better. I feel like the easiest way to get him going is to just run sets for him that allow him to attack the rim. His outside shot is really struggling so why not go inside/out. You expect guys like Lowry to not go 3-14 again, so really the Raptors don't have to adjust much to win this series, but they do need to start getting their blue chip players going a little bit.

This was one of the more thrilling Game 1s we had, and frankly I don't see much changing for Game 2. We know Will Barton is done and from what I've read Gary Harris has been declared out for Game 2 so chances are this is going to be another dogfight. It's pretty easy to pinpoint where the Nuggets need to adjust, this time around their goal should be to hold Donovan Mitchell to under 57 points. Offensively, I'd like to see the Nuggets get to the line more. They took just 18 FTs in the first meeting, and no starter had more than 4. In fact, two different starters didn't take a single FTA. We know Jokic/Murray can get hot and carry you down the stretch, but maybe find a way to get Millsap some easy buckets and some FTs. You can't assume they'll shoot 51/53% with 22 3PM again, so maybe slowing things down and finding a way to get Gobert into foul trouble would be nice.

For UTA, they need more from Gobert I think that's pretty obvious, but they also need to do a much better job as a whole on the defensive end. We saw flashes of that in the third quarter of Game 1, but ultimately it fell apart late. Who is going to step up and stay with Jamal Murray?

On the offensive end, if someone is going to help Donovan Mitchell it has to be Joe Ingles, and him taking 12 threes of his 14 FGA isn't the formula. No other Jazz player but Mitchell was all that aggressive in attacking the rim, and the Jazz need to find a way to not overly rely on isolation basketball. They had just 18 assists on 46 FGM in the opener, and while a lot of that is Mitchell going crazy, you can't rely on that moving forward. They need to get back to moving the ball, getting good screens from Gobert, and making sure they are closing out hard on the Nuggets shooters.

Pretty simple adjustments for the Sixers in this one. First and foremost, remember you have Joel Embiid. That seems silly but it's a legit concern. Part of that is on Joel though. He kinda quit in that Game 1. He didn't demand the ball and work to establish position down low like his life depended on it in the second half of Game 1. My guess is what we saw in the initial minutes of the first quarter on Monday is what we're going to get today for a full 48. The Sixers tried to get cute and not force feed Embiid, it didn't work, so now it's time to change it up. I think this is the game we see Embiid throw up that monster 35/18 or some shit like that while living at the line. If the Sixers don't do that for the second straight game, I don't know what to say. The other very apparent adjustment you'll probably see is starting Thybulle. He had success on Tatum in Game 1, and Horford is too much of a liability on the perimeter matched up with the Celts wings to continue to start him. They need to find a way to make Tatum work for his shots, especially with Hayward out.

For the Celts, their biggest adjustment is obviously how they replace the Hayward minutes. They've done it before so it's not something they can't do, but it does provide a series of challenges. Can Marcus Smart keep his shot selection under control? Will there be enough shooting on the floor to make up for the chance one of Kemba/Tatum/Jaylen have an off night? How will the account for Hayward's absence defensively? It'll be interesting to see how Brad switches up his defensive scheme knowing they'll probably have to deal with Embiid a whole lot more this time around, and this is a real opportunity for this team to break the spirit of the Sixers. If they lose again even with Embiid playing well while also not having Hayward? That'd be pretty massive.

While you can acknowledge that the Mavs 10000% got boned in their Game 1 loss, there are also reasons to think maybe they would have lost the game anyway. For example, this team has no idea what to do with Paul George. That's their first adjustment. How the hell can you slow down the two Clippers wings. Also, don't get down like 16-2 in the first few minutes. That's important. If the plan is to let Kawhi/George get theirs but stop everyone else, well then you cannot allow Marcus Morris to have 19 points on 8-13 shooting. At some point you actually have to play defense, which as we know is something the Mavs struggle with. But if they show up on that end and also cut down their turnovers (21), they have the top end talent to take this game. Chances are they'll have a motivated Porzingis and then Luka is going to do Luka stuff, so really they just have to avoid that one bad quarter. In Game 1 it was the 13 point third after dropping 69 points in the first half. Make sure nobody gets ejected, and the Mavs could pull it out.

For LAC, you want to find a way to defend Luka without fouling. Make him beat you with his jumper. he went 14-15 from the line in Game 1 which was nearly more than the entire Clippers roster. You have to imagine their two bench studs won't have another off game so really there isn't all that much for the Clippers to adjust outside of how they defended Luka. Maybe be a little better at closeouts and guarding the three point line, but for the most part the Clippers were fine in the first game. As long as they don't make a habit of blowing double digit leads, they should be fine.

The first two days of the playoffs have been everything we could have asked for as fans. Close games, a ton of drama, upsets, it's been fantastic. There's nothing that suggests Day 3 will be any different, and I cannot wait to see how it shakes out.