Just a quick blog because I'm actually astonished this is still even a thing.

I sent out the above tweet a few days ago after the Caps lost game 2 to the Isles (and before we lost game 3 to the Isles). You know, trying to keep some optimism, keep the dream alive, etc. And it's true, obviously- we went down 2-0 to Columbus in 2018, everyone said the Caps were done, blow up the team, etc, and then what happened?

It's also confusing why people act like a series is over after 2 games especially when we've seen teams come back from being down 0-2 a million times before. I guess that's just Twitter for ya.

But the thing that shocked me were some of the replies that went like this: 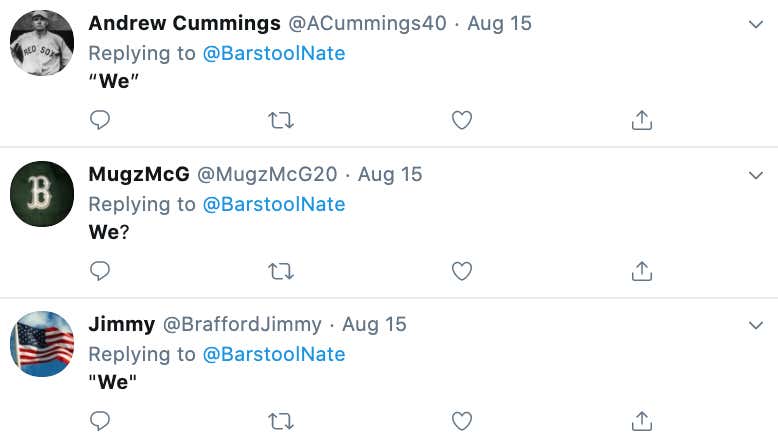 And I'd go as far to say the teams and players want the fans to say "we". They want that sort of community with the fans that we feel inclusive.

Plus, as fans we get emotionally attached to the teams. Some bigger than others, but if Twitter has taught me anything, it's people will literally murder you in defense of their favorite team. When you live and die with every second of every play, when you are shelling out endless cash on tickets and merch and $15 sodas, when you continue to support your team through the ups and downs, bad trades and unruly fans, you can absolutely 100% say "we". It's not implying you personally are on the team (which I cannot believe I even need to type out), but rather that you support them. "Hey Nate, how'd the Caps do in game 3?" "We lost". It's natural.

So I implore everyone to keep saying "we" when it comes to your favorite teams. We, we, we, we, we, all the way home.