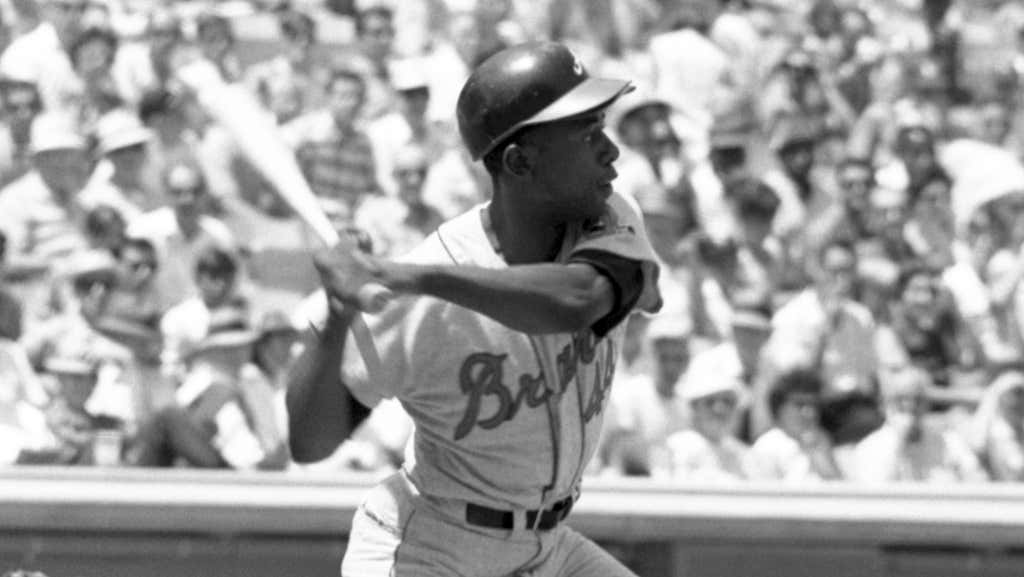 Controversy surrounds a game between the Milwaukee Braves and St. Louis Cardinals at Bush Stadium. In the eighth inning, Hank Aaron has a home run taken away when he is called out for hitting a ball out of the batter’s box. The Braves would protest the call but won the game 5-3 on a pinch-hit home run by Don Dillard in the ninth inning.

Henry Louis Aaron was born on February 5, 1934, in Mobile, Alabama. Growing up, Aaron could not afford baseball equipment and practiced hitting by using bottle caps to hit with sticks. Aaron’s bottle cap batting practice paid off as he made his major league debut with the Milwaukee Braves in 1954. Over the next decade, Hank Aaron became of baseball’s most consistent sluggers, a consistency that would one day help Hammerin’ Hank break Babe Ruth’s All-Time home run record, ending his career with 755 home runs in 1976.  Hank Aaron with 755 home runs held the record for 33 years, before being passed by Barry Bonds in 2007.

Despite being in lame-duck status in their final season in Milwaukee, the Braves were in the thick of the pennant race led by Bobby Bragan as they faced the St. Louis Cardinals, holding a record of 68-49. The Cardinals meanwhile were suffering a World Series hangover under new manager Red Schoendienst as they held a record of 58-61.

The Braves had Tony Cloninger on the mound, while Curt Simmons made the start for St. Louis. The Redbirds scored two runs in the first inning, as the first three batters reached base. In the fourth inning, the Braves answered when Joe Torre scored Hank Aaron with an RBI double. The Braves took a 3-2 lead in the sixth when Mack Jones homered with Felipe Alou on base. St. Louis answered in the bottom of the inning as Curt Flood scored on a single by Ken Boyer.

The game remained tied 3-3 into the eighth inning when Hank Aaron came to the plate with one out. Aaron hit one 450 feet onto the roof of the pavilion of what was once called Sportsmen’s Park. Cardinals catcher Bob Uecker protested, saying that Hank Aaron hit the ball out of the batter’s box. Home plate umpire Chris Pelekoudas agreed and called the Braves’ slugger out for batter interference. Pelekoudas ruled that Hank Aaron’s entire left foot was out of the box when he made contact with the ball.

The Braves protested the call, as Aaron claimed it, “The worst call he has ever seen.” In the ninth inning with Ray Washburn on the mound for the Cardinals, the Braves took a 5-3 lead on a home run by Don Dillard. The Cardinals felt that the ball had not cleared the fence, but nonetheless, it won the game for Milwaukee as Cloninger went the distance to improve to 18-8 on the season. Hank Aaron would finish the year with 32 home runs, as the Braves posted a record of 86-76, fading down the stretch in September.