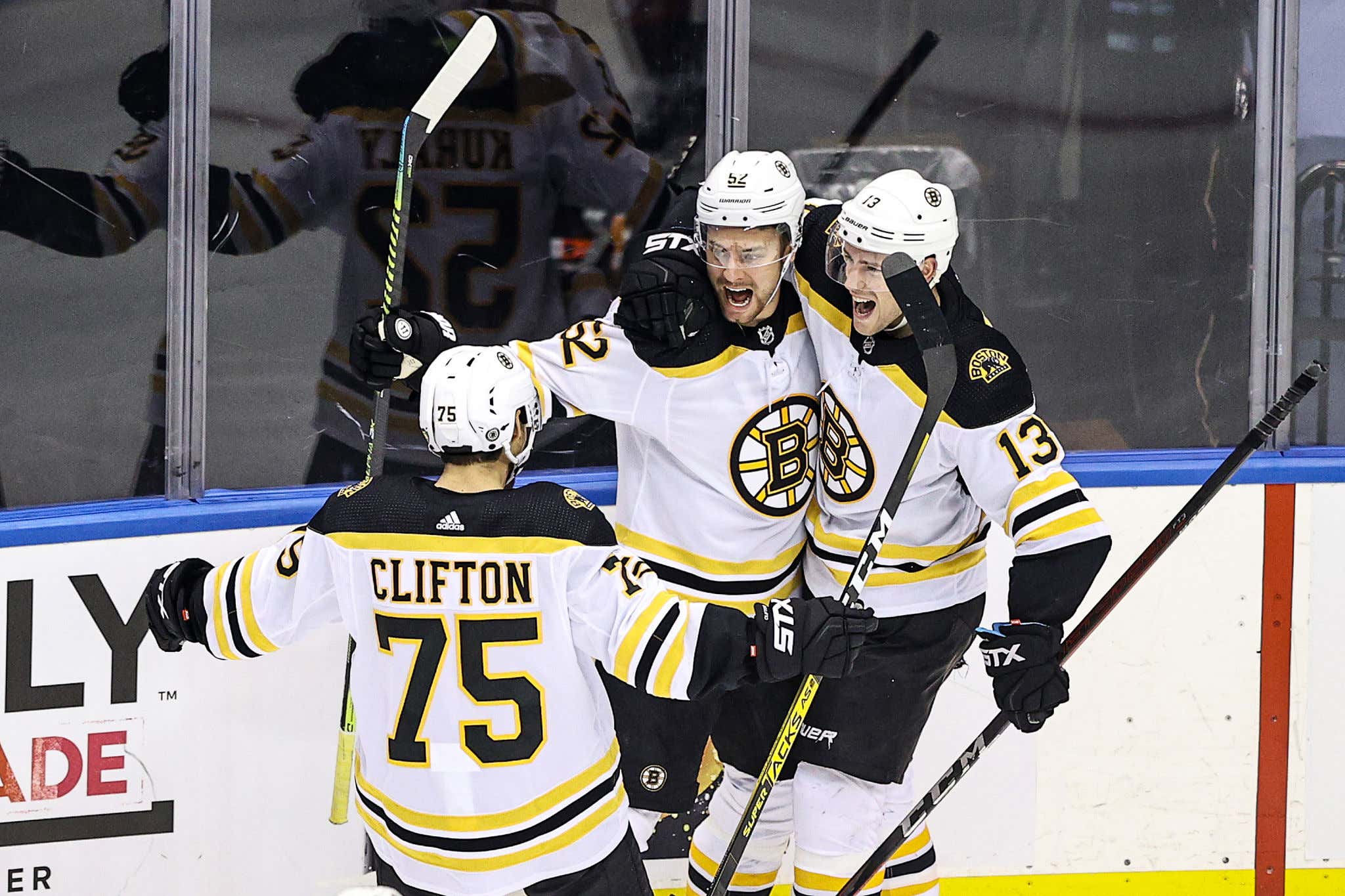 A soft "tripping" call on Brad Marchand seconds into the first period set the tone as the B's were off to an early kill. Both teams exchanged power play opportunities but it was a scoreless first period.

Early in the 2nd with the Bruins still on the PP (van riesmdyk in the box for a double minor at the end of the 1st) Charlie Coyle showed off his hands and batted the puck out of the air and in after a dump in from David Krejci. What a goal. 1-0 Bruins. It would stand as the only goal of the period.

Sean Kuraly extended the Bruins lead after deflecting a shot from Charlie Coyle shorthanded to start the 3rd. 2-0 Bruins early in the final frame.

Jaro Halak made things interesting midway throught the third by absolutely gift wrapping a goal for Nino Niederreiter. Halak went behind the net and couldn't clear… the puck was knocked down and Niederreiter had an easy goal. Big yikes. 2-1 Bruins.

Brad Marchand buried the ENG to seal the deal with 30 seconds left. A great flip pass from David Krejci.

- Shocking news before puck drop that Tuukka Rask had opted out, citing a family emergency. Obviously shitty timing, Don Sweeney wasn't entirely surprised Rask ended up opting out, said they had discussions during this entire time in the bubble. You could tell after the game on Thursday that he was uncomfortable in the bubble. Sucks he left but the B's gotta move on, and I thought they answered well in Game 3. Dan Vladar is now the back up.

- Nick Ritchie and Karson Kuhlman sat, Par Lindholm and Jack Studnick slotted in. Thought Lindholm played well, was noticeable, all over the ice. Can say the same about Joakim Nordstrom. Him and Lindholm played a really solid game. Studnicka seemed shy at times, not as hard on the puck as you'd like. But I think Cassidy is happy with the decisions he made, I think it'll be the same lineup going into Game 4.

- Yet another monster game from Charlie Coyle. He picked up his 2nd goal of the series by batting a loose puck in the air on the PP, and then assisted on Sean Kuraly's shorty (game winner). He's been a puck possession king and is now benefitting by getting some PP time with Pastrnak out of the lineup. Real good in all 3 zones and on special teams. Cassidy trusted him late in the game to take some shifts with Bergeron and Marchand to preserve the 2-1 lead. So like I said, solid 200 foot game from Coyle tonight, and set up the game winning goal.

- 3! THREE! Not one, not two but three penalties on Anders Bjork, not great. The B's were buzzing to start the 3rd and  unfortunately all that momentum was stopped with his ill timed penalty. Tough to swallow three penalties if you're not producing. Sweeney benched him after the third and we saw Charlie Coyle and Chris Wagner take shifts in his place.

- David Pastrnak was unfit to play once again, with a 12 pm start it was gonna be difficult (with no morning skate). I think he'll be in on Monday.

- Like Charlie Coyle, David Krejci (2 assists) was once again making things happen. Him and Coyle have been the Bruins best players in this series, 1a and 1b. Ondrej Kase and Jake DeBrusk are so close to cashing in. Not a matter of if but when. But the person making it all happen? Playoff David Krejci.

- Late in the 3rd Andrei Svechnikov went down after getting tangled with Zdeno Chara and looked like he got his knee/ankle twisted up. Immediately grabbed his knee. Hopefully nothing major but it didn't look good. Would be a massive loss for Carolina. Hope he's okay.

- In the same play Svechnikov went down in, a ref got hit in the face with a puck. New ref came onto the ice and he was amped the fuck up. Just an objectively hilarious video.

- For the second straight game the B's once again cashed in on the PP, meanwhile Carolina's PP has seen better days.

- Jaro Halak made 29 saves. The 1 save he didn't make was the gift he gave the Hurricanes. Other than that I thought he played well under the circumstances. On the flip side, Petr Mrazek had 36 saves. It'll be interesting to see if Carolina goes back to Reimer (who played G2) or back to Mrazek. It's been a guessing game.

Back it Monday night for a big Game 4.

IT WAS A GREAT DAY TO WIN A HOCKEY GAME.