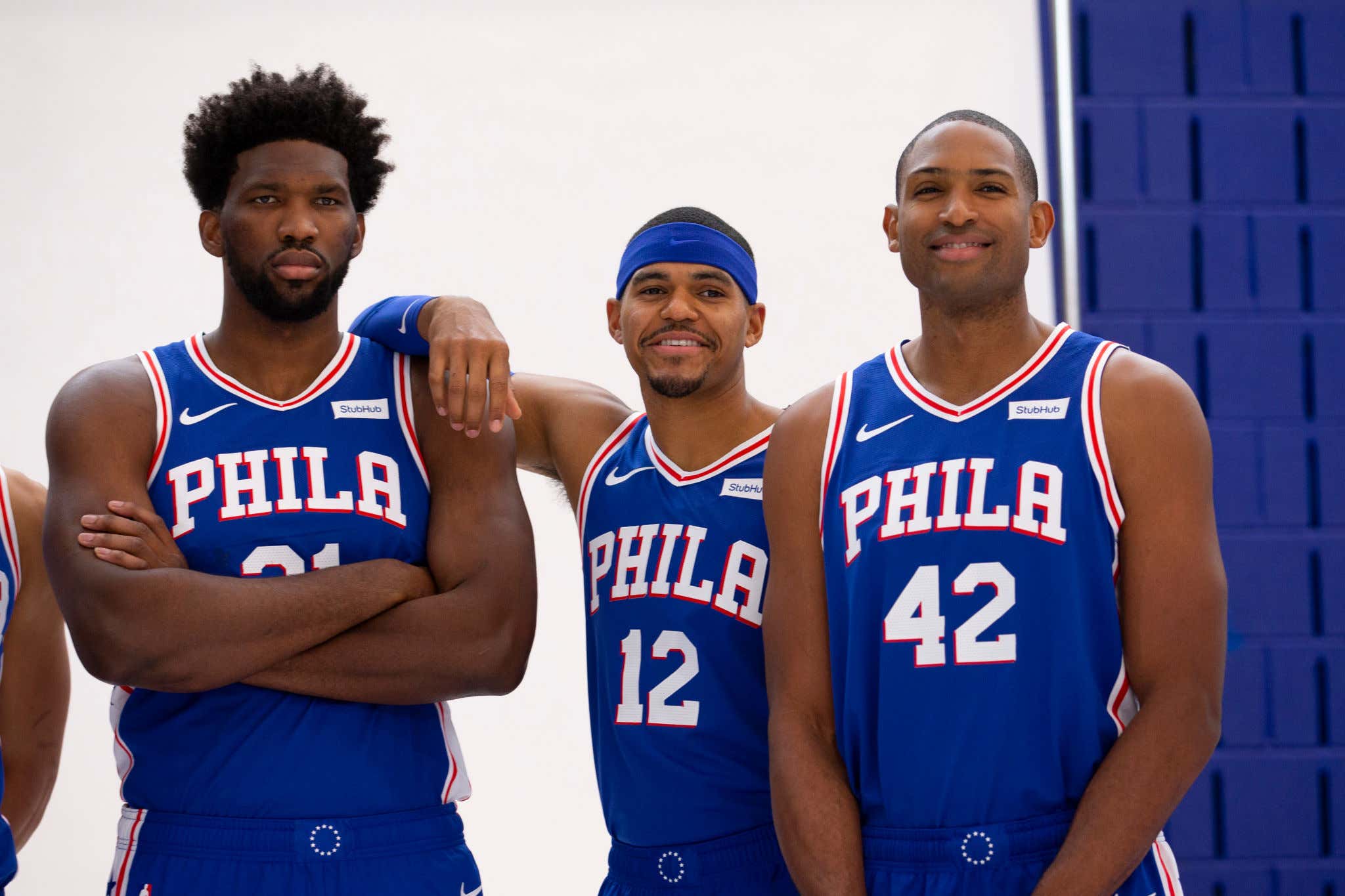 In preparation for Monday's Game 1, I wanted to do something a little different this year. I'll still be doing the Celts preview which will be out before the game, but this year I also wanted to do a deep dive into their opponent. In this case, The Process is up first. Now it's not the normal version with Simmons being out, but to try and find ways to be successful against this group you first have to understand what you're working with.

I'm just going to say this once. I saw a lottttttttt of chatter on Twitter yesterday from fellow Celtics fans about how this is going to be a quick series, the Sixers are a joke, blah blah blah.

1. Matchups matter in the playoffs

2. Things are NEVER easy for the Boston Celtics, especially in the playoffs. Even their gentlemen's sweep two years ago wasn't easy, those games were close for the most part and could have gone either way.

3. This is a different Sixers team/style than what we've seen from them in the past

In this series, the regular season H2H matchups pretty much mean nothing, and that includes the Celts blowout of the Sixers in their last meeting. No back to backs, different health situations, you can throw it out the window. The best we can do is look at how these teams are performing as of now and what's maybe different about this version of the Sixers as opposed to when they had Simmons in the fold.

- Since 8/6 (when Simmons went out), the Sixers offense has improved to the 7th best in the league, at a 117.9 rating. This is actually right behind the Celts over that same timeframe (6th, 118.1). I took out yesterday's Celts game since we're talking the regulars here and overall the Celts have the #1 offense in the bubble but you get the idea. The offensive end is actually where I would argue the Sixers are able to figure things out spacing wise. My guess is this will not be the same offensively challenged Sixers team that we saw in previous playoff games.

Well for starters their overall shooting is better. Since Simmons went out the Sixers are shooting 40.9% from three, which is the 2nd best percentage in the entire league over that timeframe. It makes sense when you think about it because they are being forced to play other guards/players who actually have a consistent outside shot.

So why is this important. Well, with Simmons off the floor and the Sixers playing through Embiid in the post, you're going to see a lot of delayed doubles in an effort to limit Embiid's production. The Sixers can now surround him with players that at the moment are all shooting well from deep. Considering the Celts perimeter defense was spotty at times when it came to closing out on shooters, that's going to be a huge factor in how this series goes. This is obviously a small sample, but guess what. When you extend it to the entire bubble experience, the percentages don't change that much 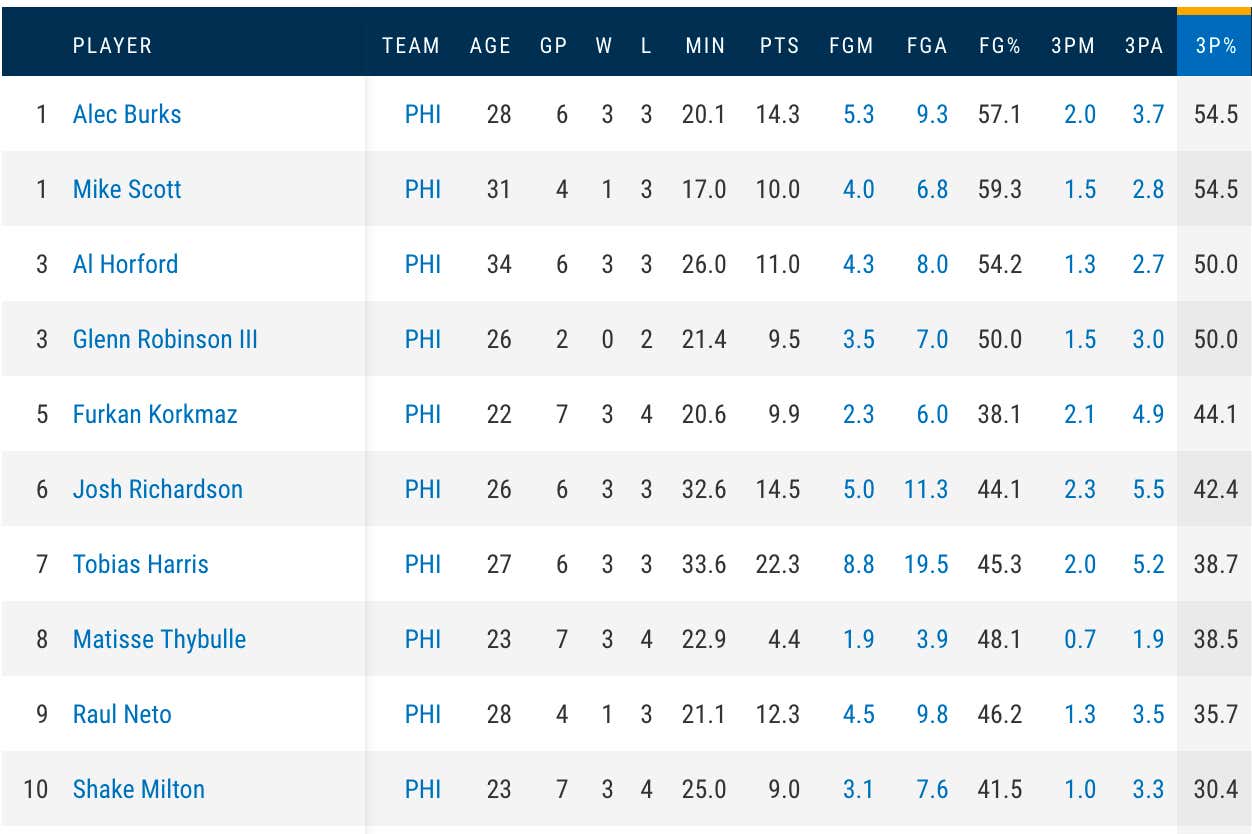 To assume the Sixers simply won't be able to shoot in a series would just be ignoring the actual production.

- With Horford now sliding into the starting lineup, it poses a challenge for the Sixers. They haven't really figured out how to play Horford/Embiid next to each other. Only a 102 Ortg and basically a 0 net rating in the 606 minutes they shared together this season. In the bubble, they've played 31 minutes together and have 115/112 splits with a 2.5 net rating.

But what it does give them is legit rim protection…in theory. The Sixers are giving up 48.9 points in the paint in the bubble which is middle of the pack at best, and that number has risen since Simmons went out. This is why that's important. The key to the Celts offense is going to be spreading this team out, making Horford guard someone on the perimeter. Now with no Simmons to lock down either Kemba or an opposing wing, the Sixers have to find a way to still defend the paint/rim at a high level. That's harder if guys are going to have an easier time getting to the rim. If Embiid has to carry the load offensively, what does his defensive effort look like? The Sixers had the 19th ranked defense in the bubble and the 19th defense since Simmons went out. This is where I think they miss him most.

- I know we make jokes when Sixers fans try and tell you that Tobias Harris is better than Jayson Tatum, but I would advise you to pay attention to what Harris is doing in the bubble. His importance to this team skyrockets now without Simmons, and in my mind he's the second most important player on the roster. He's been solid shooting the basketball pretty much this entire bubble run

and it doesn't matter if we're talking from the field or from three. During the year he ranked in the 78th percentile as a spot up shooter and hovers right around 38% as a catch & shoot player.

Guys like Burks and Robinson have been much deadlier as catch & shoot guys in the bubble. Burks shooting 70% from deep and Robinson 60%.

- Now it isn't all perfect. What you think they may gain offensively with Shake Milton running the point instead of Simmons, the loss defensively is massive. I mean big time massive. In 7 games in Orlando, Milton put up a 119.9 defensive rating. Now that's a wonky stat at times so I also looked up his opponent FG%. That came in at 50.0%. Of pretty much all the regular rotation players so far in the bubble, only Shake Milton's opponents actually shot a better percentage while being guarded by him. All other Sixers saw their opponent's FG% drop.

- When it comes to their perimeter defense in the bubble, the Sixers have been suspect at best. Holding opponents to 38% from deep which was 14th in the league, that's an issue going up against a team like Boston who can legit put 5 players on the floor at one time who can all shoot threes. I'll stress it again, this is where not having the length of Simmons matters.

So what does it all mean. Well, for me, it means the Sixers provide a series of challenges offensively. Things shift a little bit to where when Simmons was in you really had to worry about them in transition, and not so much from the outside. This version of the Sixers are much more balanced in terms of the lineups they can throw out with shooters and there won't be any possessions where you can play 10ft off Simmons and clog the paint.

Defensively this is not the same caliber team which makes sense because Simmons is an All NBA defender, and basically they just have to hope the Celts don't just attack Shake Milton on a consistent basis. They also have to show they can actually defend the perimeter at an elite level over the course of a series, something they haven't shown yet while down in Orlando.

You then also have to factor in all the narrative stuff between these two. The Sixers finally trying to get over the Celtics hump, the confidence they may have given the season series, Horford going up against his old team, all that stuff will matter. But based on what they've shown during their time in the bubble, this Sixers team will present a different look, one that honestly the Celtics are more built for. There's no way around the matchup problem that Simmons provides going up against someone like Kemba, he just picked him out on every possession. That's now gone, but that doesn't mean this Sixers team should be overlooked.