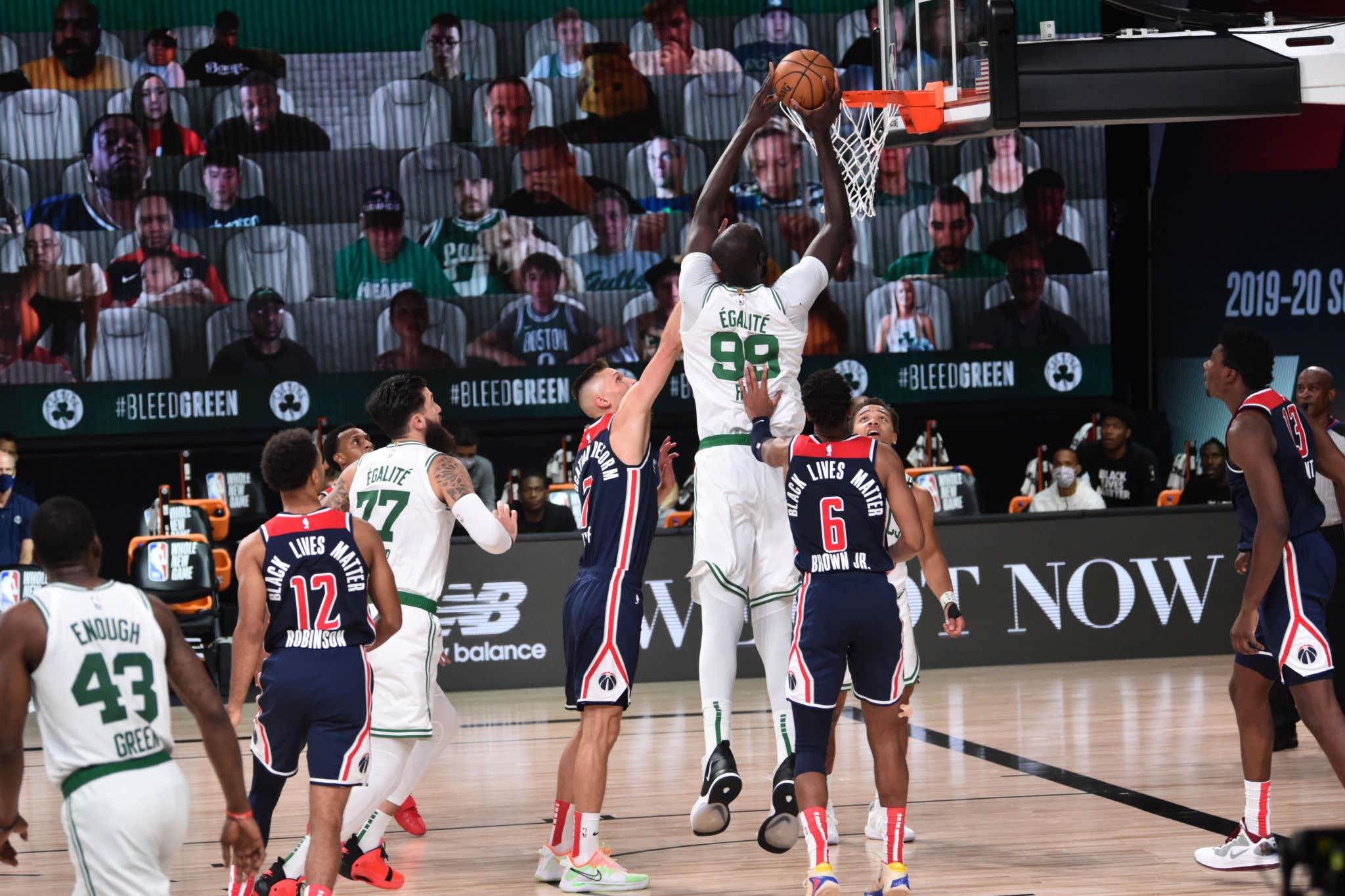 What, you thought just because the Celts were playing a meaningless game while resting all their players that I wouldn't blog it? Please. I make my living blogging meaningless Celtics basketball games, it's both a blessing and a curse. They all matter to my deranged brain. So while normally I would feel shame and embarrassment that this team couldn't even beat the winless Wizards with their bench players, I'm too pleased with how the regulars looked in the bubble to really care all that much. I didn't have a ton of expectations heading into this final game, I really just wanted to see the Summer Celts do their thing, and for the most part that happened.

The basketball was mostly gross, but there were a few bright spots here and there and a couple of things I noticed that I'm filing away for when the games actually matter. I know we all want to look ahead to Philly and Monday night, but before we can do that we need to talk about the final game of the regular season.

- What a cool story Javonte Green was this year. A guy who showed up in Summer League last year and I think blew us all away. He was super athletic, dunking everything, and in today's NBA you can never have enough wing depth. He made the full time roster and a lot of what we saw in Summer League translated into real NBA action. Yesterday was more like an extension of Summer League, so it's no surprise Javonte played great

A little turnover prone, but Javonte played with the best energy and effort of anyone on the roster by far. You never know who is watching in these final games, and anytime we get to see Javonte dunk is fine by me. I was impressed that he made three 3PM, and I wouldn't hate seeing the Celts pick up his non guaranteed 1.5M salary for next season. Why not? He's a fine end of bench guy who doesn't cause any drama and is fun as hell to unleash in blowouts.

- Aside from Javonte, I think we all wanted to see Tacko in his first action in the bubble. This was his chance to shine and just like he does every single time he steps on the floor, Tacko delivered and then some

I know we tend to joke around in this blog and some times speak in hyperbole, but let me be very clear here.

Tacko is a weapon.

I'm not saying he can change a playoff series. I'm not saying he's ready for 20 minutes a night. All I'm saying is there is something there with Tacko and he is worthy of a roster spot next year. Why can't he be your last guy on the bench? His rim protection is great and he'll continue to improve as he gets reps and learns defenses. On the offensive end you can't tell me it isn't an automatic two by just running him in P&R and then lobbing it. Look at what Boban is able to do in Dallas when he gets minutes. Tacko can't do that? Many people spent all last summer telling me Tacko isn't an NBA player and didn't even deserve a two way. Please give me a moment to respond

- I can't help but continue to be intrigued by Semi. I know it's my own fault. But in games like this where he does so much more than just stand behind the three point line and take spot up threes I find myself getting drunk off the potential. Of the guys that played yesterday, he's one that could actually see regular minutes in a playoff series depending on matchup, and if he's going to feel more confident on the offensive end that's only a positive.

The thing with Semi is when he plays with the big boys he often gets way too tentative and it fucks everything up. You saw a much different Semi in this game because he was "the guy". If Brad can find a way to help him keep that mindset I don't hate giving Semi minutes in a real playoff series.

- Robert Williams went 22-26 in the bubble. It's time to play him real minutes on a consistent basis. Thank you for coming to my Ted Talk.

- We also finally got to see Tremont play and while it wasn't all great, how could you not love the 5 steals. Your brain tells you Waters should be a defensive liability given his size, and maybe he is to some degree, but his quick hands on defense is legit. In my opinion backup point guard is up for grabs next season, and we all know Brad loves guys who he can trust on the defensive end. You combine that with Waters natural passing ability and he has every shot to snag a roster spot.

- Shoutout Vinny Sex Pants for snagging 9 rebounds. Proud of you.

- Let's be honest here for a second, losing to the Wizards in the bubble is bad. Doesn't matter who they have or who you are throwing out there, that's a game you should probably win. Just because it doesn't matter in the big picture doesn't mean I can sit here and say losing to a winless Wizards team is acceptable. It's not. It's gross.

- Also gross was the latest center that had his way with the Celtics front line. Thomas Bryant may as well have been 2000s Shaq in this game. The man did whatever he wanted whenever he wanted to little to no resistance. Kanter played 20 minutes too so it's not like the Celts had zero of their normal bigs active.

- Ish Smith is going to torment Celtics fans for the rest of our lives. Just accept it.

- I'm starting to wonder if Grant is playing his way out of the rotation, especially with how good Timelord has looked. Offensively it still is not clicking, defensively it's all that much better either, and when I look at the Celts playoff path, it doesn't help to go small.

- Back to the point guard topic for a second. Are we sure either Carsen OR Tremont can actually shoot at an acceptable clip? Neither has shown that ability in pretty much every opportunity they've had. Yesterday was no different, they combined to shoot 5-25 (2-12). Say what you want about Wanamaker as a player, but he is a consistent 8-10 points a night off the bench, can actually shoot threes, and most importantly is reliable. I can't say any of those things about either back up guard offensively at this moment in time.

- The worst part of yesterday was obviously Romeo injuring his wrist. We were so close to entering the postseason with 100% health, of course it had to be Romeo. Guy can't catch a break. Who knows how much Brad was planning on playing him in the playoffs, but all I want is to see him healthy and get a shot. Defensively he's a rotation player already, and he needs reps if Hayward is going to leave the bubble for a little while down the road. Hopefully the sprain isn't too bad and he's back before we know it.

And with that, the 2019-20 regular season has come to an end. The Celts finished the year with a .667 winning percentage which is good for a 54 win pace. Not bad if you ask me. But as we now turn the page into the postseason, none of that shit matters. Now it matters how they are able to perform under pressure when things get tight. Playoff basketball goes up a level and this team still has questions heading in. We have no idea what Playoff Kemba or Playoff Hayward will look. Can Tatum continue to be efficient and not have another MIL series. Time will tell, but the regulars are heading into Monday playing great and have all the momentum in the world. Now it's time to back it up and take care of The Process once again.