This was a lot more infuriating than I thought it would be. It all started, as most things in my life do, with a tweet. This tweet, in particular.

The responses were overwhelming. "I'm smell a tier." "Please tier for me, daddy." "Shut the fuck up." I knew it had to be done. Which led me down a simply infuriating Wikipedia rabbit hole when doing some research for this tier. Look at this nonsense 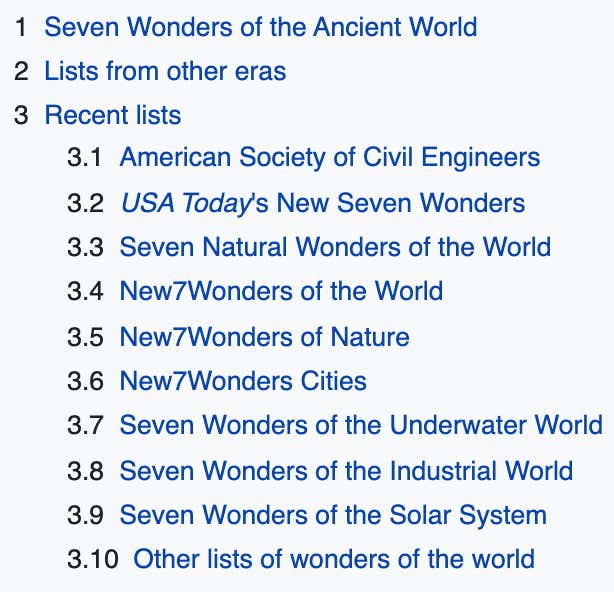 Why, OH WHY, are there 10 updated lists for wonders of the world, several of which are not even of this world. You think Herodotus and Callimachus of Cyrene wrote down the Seven Wonders of the World at the Museum of Alexandria in fucking pencil? This was not a list that needed updating, let alone the piss-poor updating which took place. Look at the abomination of USA Today's crack at it:

Their list of the SEVEN Wonders of the World has EIGHT members! They had Magic Johnson's twitter account make this list. Good Lord. And the internet is on here. The internet! Which is only slightly less tangible than the Polar Ice Caps. Mind you, this was 2006. The internet in 2006 wasn't even that wonderful. And the Grand Canyon. Fuck the Grand Canyon. "Oh look at me I'm a giant hole because the Colorado River wont stop evaporating at an alarming rate." Big whoop, bro, NOBODY cares. And they had the benefit of double hindsight when they made this list. Because in 2001 a Swiss company dedicated specifically to this cause also dropped their updated list which also pisses me off.

WHY CAN'T ANYONE KEEP THEIR LIST OF SEVEN WONDERS OF THE WORLD TO SEVEN??? And what the fuck did the Great Pyramid of Giza do to the selection committee to lose its 2400 year spot on this list? I'll give this list more credit than the USA Today one, because a lot of these do go hard. Christ the Redeemer is every bit as strong as the Statue of Zeus at Olympia. The Taj Mahal is dare I say stronger than the Temple of Artemis. But none, I repeat NONE of these are even touching the Great Pyramid of Giza. To try and give it an honorary eighth spot on the SEVEN Wonders of the World list is disgraceful and their 19-year fuck up will not go unnoticed by this man. Don't even get me started on the Seven Wonders of the Solar System. They gave the Earth the Ocean - the whole ocean - despite the fact that it's never been named to the All Earth Team. That's like winning DPOY and not making First or Second Team All Defense. It's stupid and dumb and makes no sense. So before I get too mad, let's get to tiering. Tiering always brings me solace. 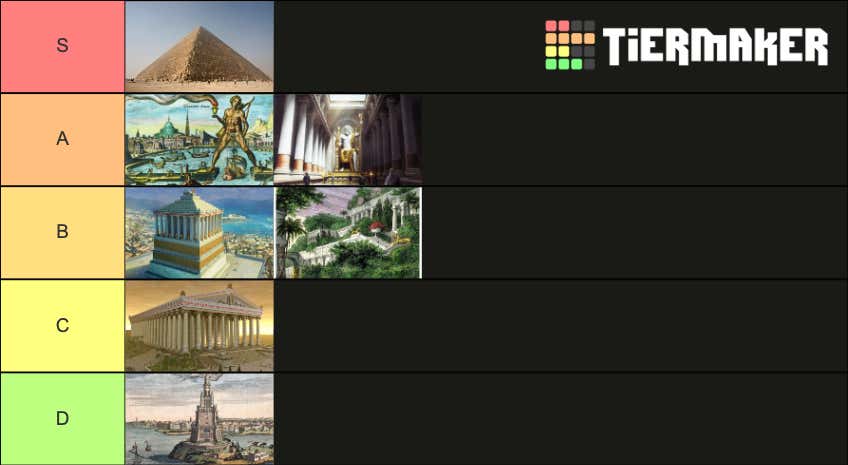 They call it the Great Pyramid of Giza for a reason, folks. Because it's great. 4,500 years old and still going strong. You wont find a better wonder on this planet. Not today, not ever. It's far outlasted its contemporaries on this list which matters tremendously. It's also so unfathomably wonderful that a good portion of living, breathing human beings believe it to not be of this planet. That not only was this pyramid constructed by aliens but it may be a key or portal to other worlds and dimensions. The only thing that's put on as dominant a performance over the last 4500 years is the Sun. The fucking Sun. They don't make wonders more wonderful than the Great Pyramid of Giza.

A Tier - Colossus of Rhodes, Statue of Zeus at Olympia

The Colossus of Rhodes is so goddamn strong I can hardly stand it. All port cities globally should have large, solid gold statues of their respective gods erected at the city's limits. "You wanna fuck with us? Take it up with the big guy. You get by him, you can have what you please." SO strong. Same goes for the Statue of Zeus at Olympia. "Here is our god. You wanna fuck with him? Be our guest. He could be anywhere at any time. He could be that cow over there. That cow will also fuck your wife. I promise you do not wanna fuck with him." These two go hand-in-hand in my eyes. Like Magic and Bird. You can't have one without the other. To have a massive gap in your rankings of these two would show you know nothing of history nor taste and you should be ashamed of yourself.

B Tier - Mausoleum at Halicarnassus, Hanging Gardens of Babylon

Is there a stronger word in the game than mausoleum? Goodness gracious. You know you were serious business on this planet if you get buried in a mausoleum. It's like how you must be important enough to earn the word "assassinated" when you're gunned down in the streets. They're not handing out assassinations nor mausoleums to nobodies. And boy of boy did this mausoleum deliver. 150-feet tall, took two earthquakes over the span of 300 years to finally knock it down, the four biggest sculptures in the world collaborated on it, and they discovered one of Xerxes' jars buried inside. Now, the Hanging Gardens of Babylon? You talk about someone in their goddamn bag when they cooked this up. Golden adornments strewn throughout, greenery every which way you turn, gorgeous view of the River Tigris, I'd argue it's the height of luxury. So why isn't it higher on the list? Well, for starters, they're not sure it really existed. Or if it did exist, it didn't have that long of a run. Or it existed in Greek and Roman mythology and Babylon went "Oh yeah we have that, too. No you can't see it, it's under maintenance maybe next time fellas!" Potentially never existing is a huge blow to how wonderful it could be. If it was real? Certainly a case to be much higher.

A solid temple. There's no arguing against the solidness of this temple. But it lacks some of the flair of the rest of the wonders. This is one of those players who got into the Hall of Fame back before the League was integrated. Like the Taj Mahal puts the Temple of Artemis on a poster seven days a week with minimal to no effort. That's no fault to the Temple of Artemis but it's still true and plays a factor here. Everything on tiers S through B stood up to the test of time, the Temple of Artemis just happened to be one of the seven things built at the time of this list's creation.

Lighthouses in general are just ok. This one wasn't all that special. I'd argue it wasn't even cooler than the museum of Alexandria where this list was penned. Maybe that's my historical hindsight speaking but I don't care, it feels true in my plums. A lighthouse makes for a great picture to slap on the back of a postcard but when we're talking about world wonders it leaves much to be desired. Being 330-feet tall can only account for so much here. You don't have George Mikan in your top seven all time, and I don't have the Lighthouse of Alexandria in mine. You put the Lighthouse of Alexandria up against Christ the Redeemer and the Lighthouse is losing 21-0, might not even touch the ball the entire game.