The United States has needed a third party for a while now. Perhaps never more than 2020.

Can't make up your mind on whether to hitch your wagon to the Titanic or the Hindenburg of our two-party government system?

Then do I have the candidate for you.

Hear me out for a second.

Despite being born into the world's highest class monarchy at the time, George faced an uphill battle right out of the womb. Some say he showed signs of autism, developing very late as a child. (Probably due to the rampant incest going on for generations and generations). He was handed the keys to the world's biggest superpower at the ripe age of 22. He was forced to inherit the Seven Years War and its massive financial burden. He was able to end the war after 3 years and began to get the kingdom back on track, but the fiscal toll had already been taken. Being in the red as bad as England was, the King hiked up taxes. This set off even more instability both at home and across the pond. On top of it all, George's mental health began to deteriorate rapidly. He was known to talk to himself constantly, yell at himself until he would lose his voice, and foam at the mouth regularly. He fired off rambling letters as long as books to pretty much everyone, and he never slept. His people deemed him "mad."

Scholars and psychologists today have surmised that he suffered from bipolar disorder.

Which means he's the perfect third party candidate for 2020.

Buy the shirt and show your support. 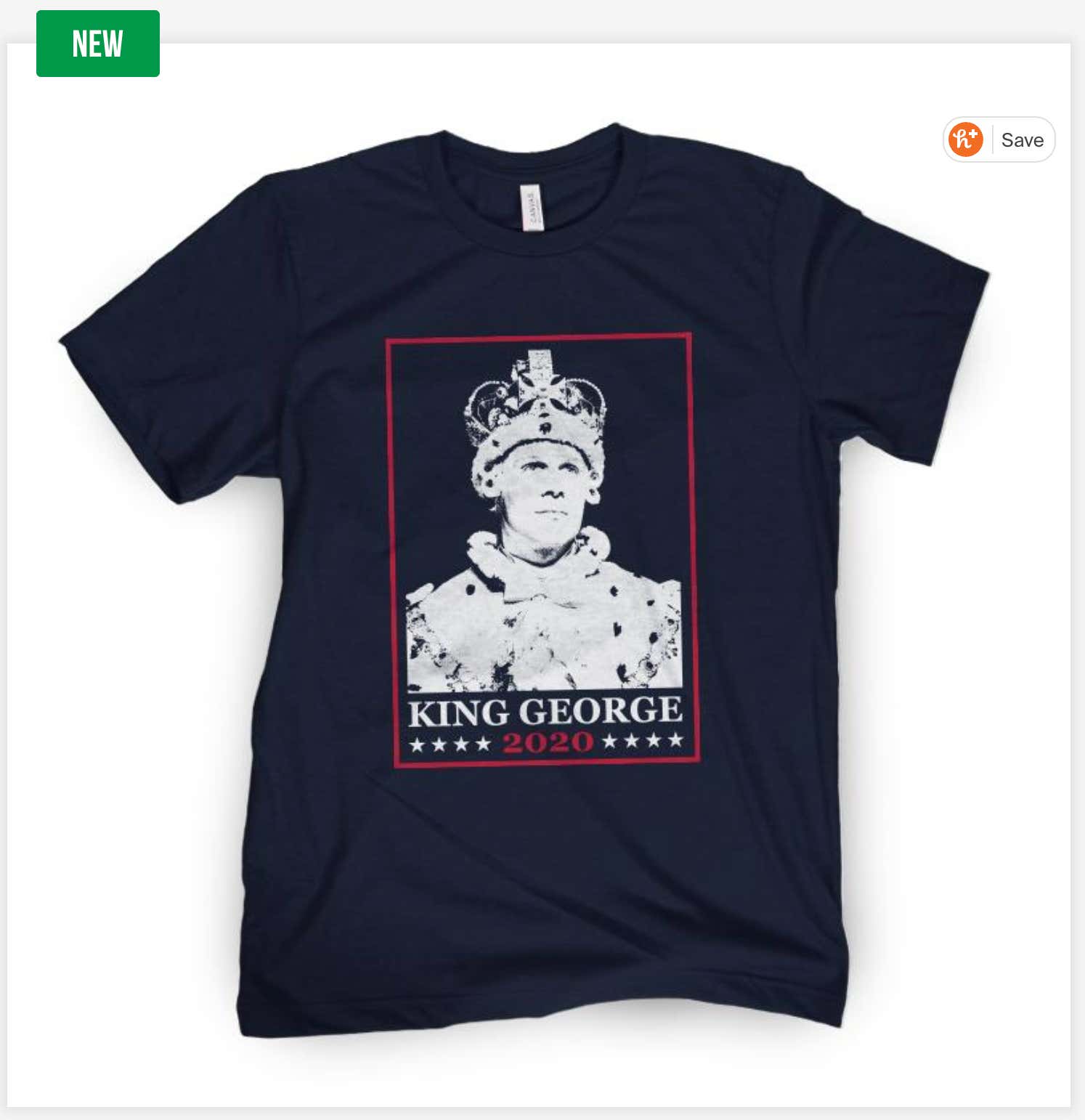 It bottles my mind that with 6 months in lockdown, no sports up until a few weeks ago, and pretty much nothing new or interesting to watch on TV anymore that there are still people out there that haven't seen Hamilton. I realize not everybody has Disney+ or wants to commit to yet another streaming service on top of the 20 they already have. But there are people I know that have it, and people I've given my login to (Welker) that refuse to watch it.

Granted, there are people out there with more sophisticated taste than mine, that weren't impressed with it on TV. But although I thought it kind of paled in comparison to the live version, the streaming version was still pretty fucking amazing.

I wasn't lucky enough, or rich enough, to see it on Broadway. But I got to see it in Chicago twice and it blew me the fuck away both times.

I still remember the first 10 minutes seeing it, sitting there with my mouth wide open, staring blankly towards stage, thinking to myself "how the fuck is a human smart enough to translate all this historical information into not only a rap, but with music and a dozen characters." A genius that's who. And I genuinely think the Chicago cast was a little bit better overall than the NY cast but that's just my bias opinion having seen them live (Chicago) vs on TV (NY).

The way the whole historical context is conveyed through song is incredible, but the songs are also pretty fuckin fire.

And anybody that's seen the show will tell you, King George III steals the show.

Without spoiling it, from the moment he steps on stage you're left wondering when he'll be back and hoping for him to return.

The NY King George was far and away the best character from either show I'd seen, and that was before people on twitter had informed me he was the guy from Mindhunter, Jonathan Groff.

Just insanely talented. (Guys only 31 too).

If you still haven't seen the show, or hate musicals in general, or history, I can't vouch for Hamilton enough. If you appreciate creativity, or art whatsoever than you should give it a shot. (If you do, crank your sound up, try to watch in surround sound, and put the captions on.) It's far from boring and there's not much better available right now.

And buy the shirt -