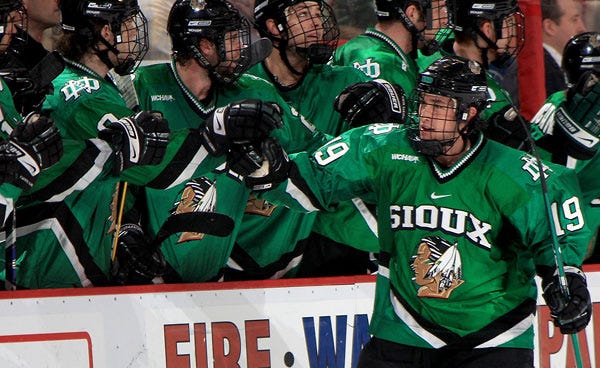 The University of North Dakota is exploring the thought of a nickname change since in 2015, the name “Fighting Sioux” is too offensive and racist and people who are 1/16th Native American are pissed. That’s besides the point. If the University of North Dakota gets a new mascot, it realistically it has no actual impact on my life so whatever. But whether the school does or does not get a new nickname, you can rest assured that they will not be called any of these names that were suggested in this 321-page “Non-Consideration” List. While like at least 100 of these pages were strictly people suggesting to remain being called the Fighting Sioux (slash Soo/Sue/Suh), the other 200 or so pages had a few hidden gems in there. So lucky for you, I picked out a few of the most outrageous nickname suggestions (along with their explanation of why said name should be considered) so you don’t have to do the searching yourself. But I would suggest checking out the full list at some point in your life for a good laugh. Here it goes.

Big dick north dakotans: We have the biggest dicks

If it’s on a jersey, it’s true. That’s the way it works. And once everyone knows you have the biggest dicks, you win every game regardless of the score. Pretty genius.

Brianna Close: She is ok I guess

The idea of a chick who is “ok I guess” being a school’s mascot is hilarious to me. I don’t know if that’s just because I’m feeble minded, but if you actually think about it, it’s amazing.

Butthole lickers: Why not

Gotta eat the booty like groceries. Eating ass is in. Everyone knows that.

The president of UND’s last name is Kelley, but I’m really hoping this name suggestion is just talking about some random girl named Kelly. In which case, I 100% agree that Kelly is a cunt.

Dockers: Because all the dudes like to dock their dicks in their free time. Probably

Hey, they’re a close-knit team. What can ya say. A team that docks together wins together.

Fighting Onions: Many diverse layers, sweet yet tangy with each bite. leaves a bad after-taste like our opponents have after we crush their hopes for victory

You tell me a team should be called the Fighting Onions with zero explanation and I say you’re a fucking moron. But after reading that explanation, I actually think it’s a great fit and makes perfect sense.

Which makes it impossible for anyone to root against your team. Smart move. I like it.

Not Iowa: Hey, could be worse right?

You just gonna sit there and take that, Trent?

Spelling errors and the fact that it’s only 23 characters and not 25 (unless you count the spaces) aside, I think this name should do relatively well in Obama’s America.