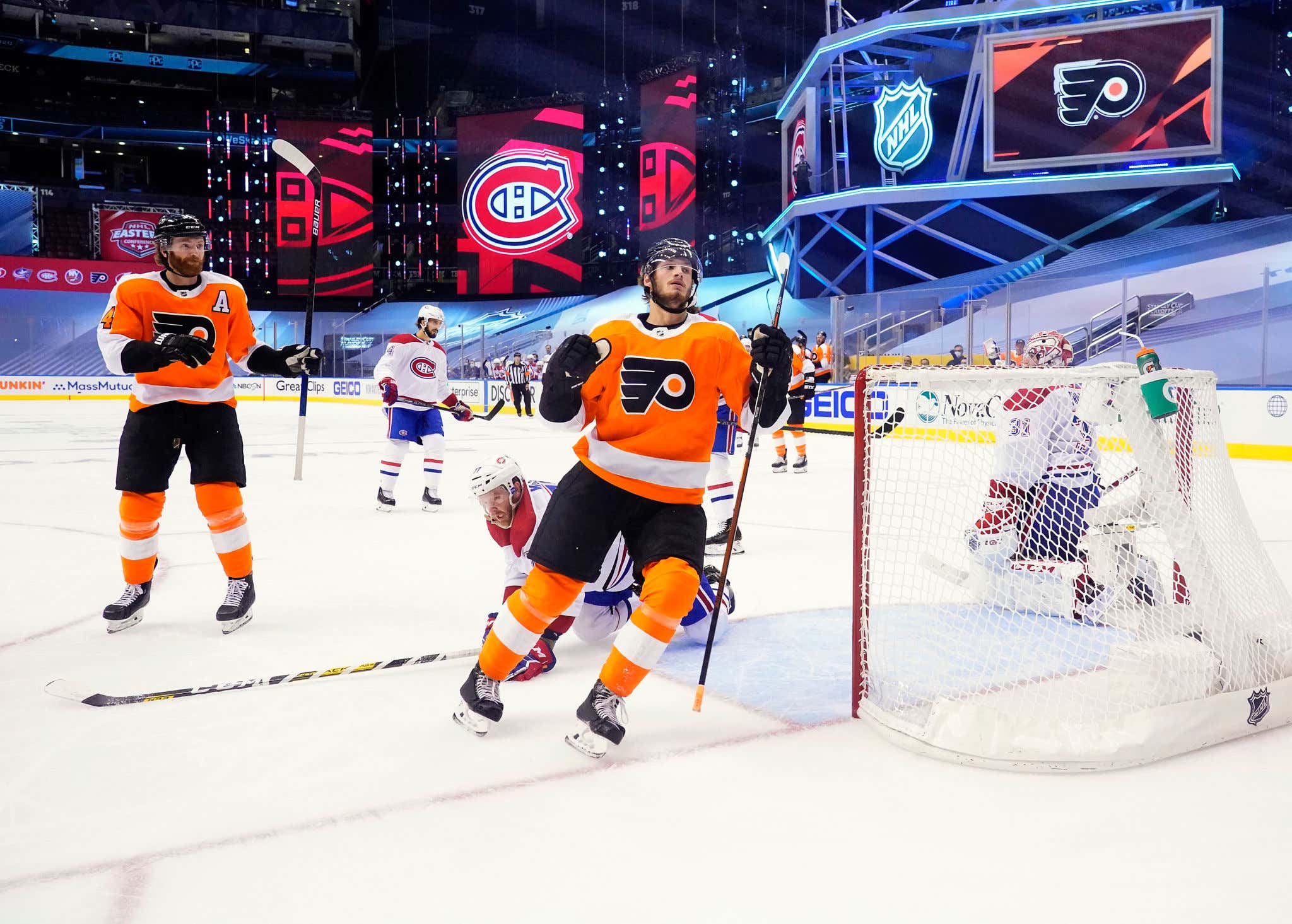 If you saw what the Montreal Canadiens were able to do against Pittsburgh in their qualifier round, then you shouldn't have gone into last night thinking that this series was going to be easy in the slightest. I mean I definitely had hoped it wouldn't have been this stressful this early, but that 2nd period showed exactly what type of team the Flyers are up against here. Those bastards are relentlessly chaotic. A game against Montreal would be like if every time you went to sit down on a couch, a handful of thumbtacks just popped up out of the cushion. At no point do you ever feel like the game is settling in.

The Flyers are without a doubt the better team, but each shift of each period of each game is going to be a dog fight. And that's not just because of some playoff hockey cliche, that's just because Montreal are a bunch of chihuahuas who thrive on chaos.

Luckily there's at least one player on this Flyers team who doesn't let the chaos effect their game in the slightest. And that's the beauty wearing #79 between the pipes. Even in that 2nd period where it was just defensive zone turnover leading to a shot after neutral zone turnover leading to a shot, Carter Hart was as calm and confident as possible in the net. There were plenty of defensive turnovers in that period but rarely were there ever any rebound opportunities after Montreal converted those turnovers into shots. So when the game was full blown drunk off its ass, Carter Hart was there to provide the late night cheeseburger and early morning Pedialyte. Very mature of a now 22-year-old (Happy birthday, you beautiful beast).

So between Carter Hart's calmness in net and the confidence that gives the rest of the team to just go out there and make some plays without having to worry about giving up another goal, that is how you survive a team like Montreal. You're gonna have your B-hole clenched the whole time this series no doubt about it. But that's playoff hockey, and the Flyers have the depth and the goalie to survive it. Now let's get into some specifics.

Heading into last night's game, the Flyers PP was operating at 0.00% in the bubble. I'm not sure if you guys know how percentages work or not, but that's not great. It's rather awful, actually. Now to their defense, there are no fans in the building screaming at them to "Shooooot" during the powerplay so how are they supposed to know what to do? But on their first man advantage of the game last night, it seems like maybe they were able to pipe in some fan noise because the Siberian Sniper decided to go bombs away. Flowvorov unloads a clapper from the point and Jake Voracek's gigantic ass provides just enough of a screen on Carey Price for this one to end up in the back of the net. Powerplay finally gets one on the board.

Now that's not to say that the powerplay was great all night. There was that one that went from a minute of 4v3 to a minute of 5v4 and the Flyers completely botched the back half of that powerplay by not even being able to get the puck in the zone. But they were also snapping that puck around and getting a ton of chances during the 4v3 half of it so I can't complain. The fact of the matter is that the Flyers just need to keep making the most out of their powerplay opportunities because like I mentioned before, the Canadiens are going to make it hard for them to really get any sort of settled offense at 5v5. Any powerplay goal is better than none.

It took the Flyers awhile to really get into their usual groove of just dumping the puck in and forechecking their dicks off to generate pressure. The 1st period was wide open for both teams to kinda do whatever they want. Montreal clearly controlled the game style in the 2nd period. But by the time the 3rd rolled around, I thought we were finally starting to see some Flyers hockey in this game.

Getting pucks deep is such a cliche but the best part about it is that even if you don't create a scoring chance off of the forecheck, at the very least you are forcing the Habs to breakout from deep in their own zone. And the deeper down the ice you force them to breakout from, the more time you give stallions like Phil Myers to hustle back and break up any sort of transition opportunity for Montreal. I mean that should have been a clear 2v1 opportunity for Gallagher and Tatar. But because Phil Myers is fast as fuck, he devoured the ice in front of him and took away that pass over to Tatar. That forces Gallagher to shoot with Carter Hart being able to track that shot from a mile away, minimal rebound, crisis averted.

So again, even if the forecheck doesn't lead to offensive, it gives the defense a better chance to kill plays like this one. Though I'd sure love to see 21-13-11 start to run the "forecheck your ass off and then immediately score a goal off a turnover" play that they love to run so often.

So we just watched how Phil Myers completely killed a 2v1 opportunity for the Habs later in the 2nd. But earlier in the period the Canadiens had a clear 2v0 and the best defenseman out on the ice for the Flyers was some absolute dog shit ice in Toronto after 9 periods of hockey had already been played on it that day.

Listen. This is just something that teams are going to have to deal with in these playoffs. It's only August 13 right now. We're only 1 game into the 1st round of these series. The ice is already trash right now and it's going to be extra big trash by the time the conference finals come around. Shitty ice giveth, and I'm sure that eventually shitty ice will taketh away. So there will come a time when it screws the Flyers. But for now, I love this dog shit ice because as much as I love Carter Hart…a 2-on-0 with nobody but slow ass Niskanen trailing behind is a tough order to stop. Speaking of which…

Matt Niskanen, Step Into My Office

The Niskanen for Gudas trade was some of Chuck Fletcher's finest work. The stability that Niskanen has been able to provide to the blue line so far this year cannot be understated. So in no world am I trying to say that Niskanen shouldn't be on the ice right now. All I'm doing is questioning whether or not everything is fine. Because last night was a rough one for him. And everybody is allowed to have an off night here and there. I totally get it. But I would feel so much more comfortable knowing that it was just an off night rather than some sort of lingering issue he's dealing with. Because the game just looked a little too fast for him last night. A couple of really bad turnovers and then he wasn't even able to bail himself out because the play would just buzz right past him. If it was just a bad game then I'd say Matt Niskanen has earned himself the ability to have a few of those. But if it's something that keeps happening moving forward, then there might be some issues.

The Most Important Joel In This City Is Farabee

Even without the goal last night, I thought Joel Farabee had a great game. The exact type of game you'd want to see out of a 20-year-old rookie playing in his first actual playoff game. This kid plays the game with so much intensity. He plays big time "fuck you" hockey, and you need that in the playoffs. So if you score a goal against the Flyers and he's out there for the next shift, he's going to be so pissed off that he has no other choice but to immediately score 16 seconds later to take the lead again. And he's only going to play on a bigger "fuck you" mode as the series keeps going, especially after this hit from Petry.

I mean that was a massive, clean hit that completely blew Farabee up. But he pops right back up and when the camera panned to him on the bench at the end of the shift, this sick bastard looked like he was plotting on how he was going to end Petry's life. If someone like Jonathan Drouin got blown up that hard, they'd be turtling up for the rest of the series. But it just seems like it fuels someone like Joel Farabee because he's got a little psychopath in him. I wouldn't say he's equal parts psychopath and skill, but 40% psycho? Yes.

- I don't think Claude Giroux played a bad game at all. I think Giroux's role on this team has just sort of shifted right now. He doesn't have to be the guy to get things going for this offense. There was a while where if the Flyers top line wasn't producing offense, then nobody was. But that's not the case anymore. Would I still love if he provided a huge spark goal at some point during this series? Of course. But I think Claude Giroux looked fine out there last night.

- The Tatar-Suzuki-Gallagher line is going to be a pain in the ass all series. That's the one line that really seemed to eat away at the Flyers last night, which makes sense considering that line is fast as shit. Maybe I'm wrong here but it just seemed like there were too many times when they were able to get matched up against the Nate Thompson line. And that line grinds, don't get me wrong. But that's still a mismatch.

- Speaking of the Flyers' 4th line though, I just want to mention that I love Tyler Pitlick. Doesn't get a ton of ice time but makes the most out of his shifts. Pesky. Active stick. Can move around out there. I'm a big Tyler Pitlick fan.

I already wrote a full blog dedicated to him last night. So go ahead and give that a read if you haven't yet. If there's one thing we can all get behind, it's that Carter Hart deserves pageviews.