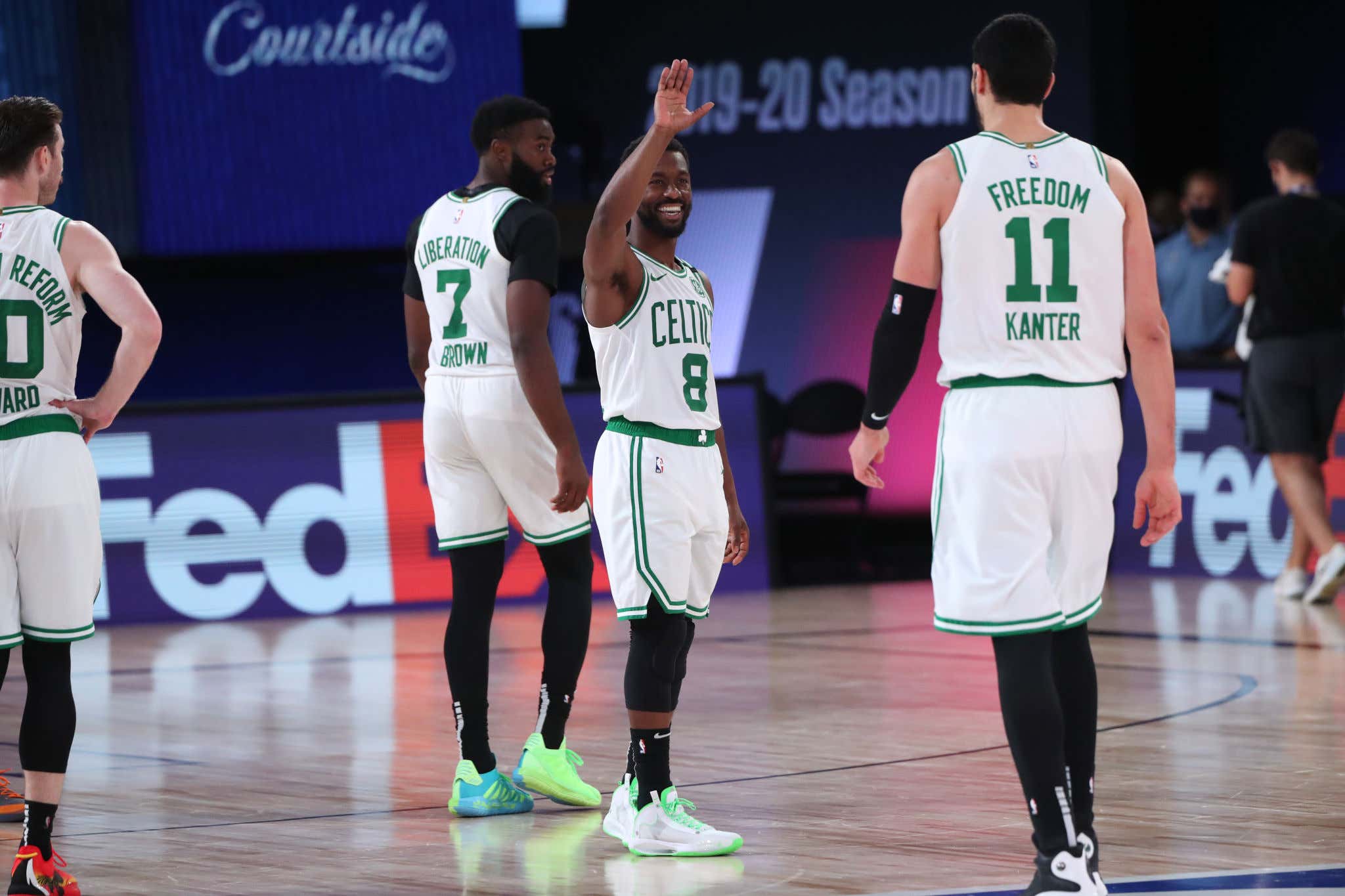 I'm going to stress this once again for everyone so we can all be on the same page here. Despite having the longest current winning streak in the entire Eastern Conference and the second longest streak in the NBA after putting up 4 straight games of at least 120 points, none of these results matter when it comes to a potential playoff series. The same way their losses against MIL and MIA had zero impact on a potential playoff series the same is true for the wins. What matters is how they look in these games. What is their energy like? Do players look in shape and like they've gotten back to how they looked before the hiatus. How is Kemba's health, shit like that. Those are the things that matter when you want to talk about the postseason. Beating a Grizzlies team that has 1 win in the bubble isn't exactly all that impressive, but what was impressive was how the Celts won and really how they've been playing since the Miami loss.

I have to think that all the main rotation guys are done until the playoffs, and overall I'd say the bubble was a success for this group. There's plenty of things for them to work on before the playoffs start, but for the most part they played like a team that should be considered a contender to get out of the East. For me personally, almost every box I was hoping to check once they started back up again was checked. We'll get into that stuff in a blog later today, but for now let's relive what was another blowout win.

- Can you feel it? That sound you hear are all the people mad as hell that Jayson Tatum's brutal game against the Bucks was just a fluke and he's back to being one of the most unstoppable offensive players in the entire conference. This man is on an absolute tear, and looks like the type of player we saw before the break

29/6 on 10-13 shooting and 4-5 from deep as well as 5-5 from the FT line while barely breaking a sweat. Dear lord was that beautiful to watch. We got it all in this one too which is what made it so sweet. We had Tatum's unguardable midrange, he was making threes with guys right in his face, he was attacking the rim, it was about as perfect an offensive showing as you can expect. He basically did it in 3 quarters too since he only played 2 minutes in the fourth.

Tatum's final bubble averages? How does 22.4/6.0/3.7 on 46.9/44% sound? Remember, that INCLUDES his Milwaukee disaster. Pretty good if you ask me. The thing is, it's more than just his offense. Tatum is also showing up on the defensive and and that's what is going to take him up a level. We know the offense can be elite, but it's the defense that really makes this team tough.

- When it comes to biggest questions heading into this bubble, the one thing I think every Celtics fan can agree on is that we were all worried about Kemba. The quotes we were hearing were great, but then he never played. Well, I think we can all also agree that Kemba looks fantastic. Like the knee issue never even existed

I cannot stress how important a 100% Kemba is to the success of this team. His ability to make his primary defender a non factor is a huge part of this offense. It forces rotations which leave our best shooters wide open. His midrange is crucial to keeping defenses honest. When he unleashed his patented stepback in this game, that's when I knew Kemba was feeling better than ever. By my count it was the first time we saw that thing this entire bubble.

What's really stood out to me is his efficiency though. The point totals are great, but what matters is that Kemba can get back to being an efficient scoring guard. I'll take his 49/42% shooting splits in the bubble thank you very much. Whatever the plan was for his rehab is clearly working, so let's give credit to the Celts for finally not fucking up an injury. Now let's see how he holds up in an intense playoff series, but everything we've seen from him in his 6 appearances tells us we have nothing to worry about.

- Another incredible night of ball movement with 29 assists on 44 FGM. It's no surprise that during this winning streak the Celts are 2nd in the NBA in assists at 29.3. It's not exactly rocket science, when this team moves the ball and gets everyone involved and plays the right way, they are nearly impossible to beat. I mean every night this team is sharing the ball and the Basketball Gods are rewarding them. If I had to choose one thing to actually translate into the playoffs, it might be this.

- Is it good when your fourth option has 19/5/5 and looks incredible?

Well before the scrimmages started I warned you all that Orlando Hayward was going to be a monster. Finally allowed to game as much as he want combined with the fact that he was already better on the road than at home, it was an easy prediction. Well, just like I thought, the man is playing some great basketball. Getting this version of Hayward is what makes the Celts so dangerous, they just have too many weapons for opposing defenses. Now if Hayward is going to be aggressive? Look out. When he caught a couple bodies in transition I literally jumped out of my chair in the blogging station. Stache Gordon is such a force I can't even stand it.

- OK this is no bullshit, not hyperbole or me just being a homer. Are you ready?

Robert Williams needs playoff minutes, and a lot of them

Every single time Timelord has touched the floor he's made an immediate impact on both ends. This has to be the biggest surprise of the bubble right? He just hasn't stayed healthy long enough or had a consistent opportunity like this all year so who knew what to expect. The result has been exactly what this team needs in terms of a reserve big. Set good screens, block every goddamn shot in sight, dunk everything, move the ball, and not be a total liability when it comes to defensive positioning. I'm not saying Timelrod is the bubble MVP on this team, but he'd get some votes.

- Another solid defensive effort to start this game before things turned into a blowout. Their energy has been so much better in these four wins its like night and day from the beginning of the bubble. Over this stretch they went from having the 2nd worst defense in the league to the 3rd best defense. Part of that is who they played, but a lot of that has to do with their energy and effort. This is the team I remember seeing for the entire year, and it's not surprising that once they got their shit together on that end they started blowing people out.

- This is my favorite version of Marcus Smart

he doesn't force things offensively, he's a facilitator first (9 assists and 1 TO), he brings energy and effort on defense, I don't even care that he went 3-7. He was a +23 in his 28 minutes and this is the version I want to see in the playoffs.

- Credit to both Kanter and Wanamaker who continue to be

- Didn't exactly love the defensive effort in the second half, where the Grizzlies scored 67 points. It didn't really matter in terms of the score, but it did feel like the Celts let up a little bit. Nobody could really stay in front or stop Ja Morant so that's something to take note of as well.

Kanter did this as well later in the game and it's simply unacceptable. If you can't contest the perimeter right, then stop doing it. This is how you end a player's season. It happened with Kawhi and thankfully Tatum came out of it OK but that was fucking terrifying.

- Speaking of Tatum, as awesome as he was offensively, the 5 TOs is farrrrrr too many. He's averaging 3.3 in the bubble which is a little high, and we saw some possessions where he struggled as a passer out of the trap. That's going to be extremely important for him to figure out because teams are going to do it to him non stop in the playoffs.

- Brad sneaky went back to not calling timeouts during a double digit run. Don't think I didn't see that.

- Tatum had his MIL game, Kemba had his ORL stinker, and last night was Jaylen's turn to throw up a dud. Just 3-13 from the floor and 1-8 from deep, this was by far Jaylen's worst night in the bubble. He's been so good for the rest of the games I think we can all chalk this up to an off night, but something did seem off. He had his moments like that awesome dish to Rob, but all his shots were short and mentally he looked a little checked out. My guess is the rest he'll have before Monday will help, but this was certainly a brutal showing for someone who has been rock solid this whole restart.

- Rough night for the Grant vs Brandon Clarke draft debate. That is all I will say about this matter.

- Can this team stop fouling? Please? A total of 38 FTA for the Grizzlies and a 27-15 foul difference. I'm not even putting this on the refs either. The Celts are fouling waayyyy too much in the bubble for my liking. Given how tight games are called, that is a death wish in a playoff series that most likely will be against Embiid. He could very well foul out the entire frontline of this roster.

With their final game being a throwaway game on Thursday, I'm entering the playoffs more confident than I was before they started. This team showed me enough and answered enough of my questions where making the ECF should be the floor of your expectations. I was pleased that after their big TOR win they didn't let up mentally and take some steps backwards but instead they continued to build momentum. That's what this is all about. Playing your best basketball of the year heading into the playoffs, and that's exactly what we're seeing this team do.