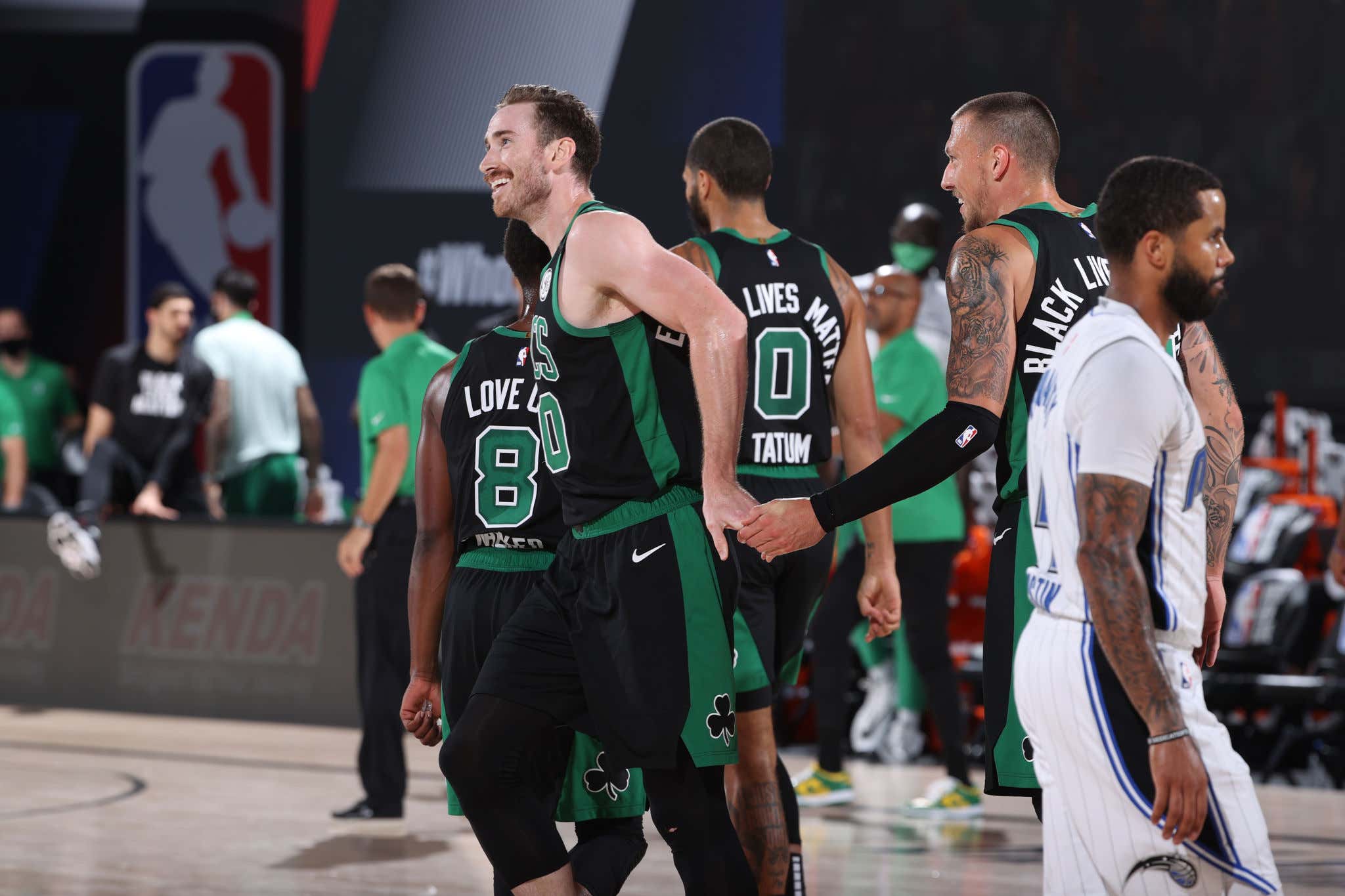 Coming off the high of the beatdown against the Raptors, the Magic game had "trap game" written all over it. We've seen shit like this before, where the Celts are getting love from the basketball word and are set to play a team that's missing all their best players, only for the Celts to play like shit and lose a game they had no business losing. A one step forward two steps back situation, something we've seen them do before. Well, it almost happened again. This is a team that has already lost to the Magic this year, and for some reason I feel like ORL always plays them tough, no matter who is in the lineup.

But I woke up this morning again feeling confident about how this team looks, because there's something to be said about pulling out a win on a night where your defense once again mostly looked like shit. It was great to see this team not fold and hang their head when they were unable to break the lead open and they didn't shy away from the fight. That's all positive. Plus it was important to see their best player come through in the clutch in the biggest moments. After the TOR win I was interested to see how this team would approach the final three games on their schedule, because this is a prime chance to build some real momentum before the playoffs start. It wasn't pretty, but that's exactly what happened.

- Before you read another word of this blog, you must apologize to Gordon Hayward. Do it.

Thank you. It's been fascinating to me how someone who is basically having a Utah Hayward caliber season continues to get the shit that Hayward gets, it's almost like his haters out there are stuck in 2018 and have not been watching the type of basketball he has been playing this entire year. Last night he was their best player and I'm not sure it's close

We all wondered if we would ever see that aggressive and healthy Hayward again and well, this is what it looks like. It fucking rules right? He's the perfect player for this system. He's driving more, he's shooting better at the rim, his midrange is beautiful, he's rebounding well, his facilitation is a real weapon, you're looking at the ultimate Wild Card for this team. If this is the version of Hayward we are going to continue to get in the bubble, this is a Finals contending team.

Now I know where this is going.

Go ahead, expose yourself in that you didn't watch the TOR game and pointing that one out. Do it. I dare you. Gordon is back and the haters are sick. I love it.

- What I loved about this game was for 85% of it Gordon was the one carrying the offense. What makes this team so dangerous is that while defenses are focused on that, Brad then throws this guy named Jayson Tatum out there and all he does is drop 29/9/6 and essentially put the team on his back in the final moments to pull out the win

Good luck. With Tatum, we know he can score. But what I continue to be impressed with when it comes to Tatum's play in the bubble is how much he's developing at a passer. Another 6 assists last night, his ability to read the defense and find the open guy is going to be crucial in the playoffs. He's going to be the focal point of every opposing defenses, so how he sees the floor is going to be important. The game tying shots and shit are great, but how about the block at the end to save the game? Tatum was engaged this entire game and it showed on both ends. No Magic player had more than 5 points while being defended by Tatum.

- If you thought it was hard for an opposing defense to handle an aggressive Hayward and a locked in Tatum, well what the fuck are they supposed to do when Brad unleashes Jaylen Brown as well?

Just 19/12 for Jaylen, no big deal. Games like this are why to this day I laugh when I think about the takes that these wings couldn't share the floor and that Hayward should move to the bench because he takes away from the Jays. Just so wrong if you ever uttered those words you should be embarrassed. I'm embarrassed for you. The three headed wing monster is what makes this team so hard to guard in the first place, and now that everyone is healthy you are seeing what a problem it is for defenses. Who do you focus on when you have three legit options who can all shoot/drive/pass?

- Credit where credit is due, I did not feel like Brad fell asleep at the wheel for the second consecutive game. Around here we call that progress. There were no terrible runs that he should have broken up with a timeout, his rotations were fine, his late game execution was good, dare I say he's getting better?

- The biggest thing Brad has learned in the bubble so far is that he can play Robert Williams real minutes. Nothing crazy like 20-25 or anything like that, but he can absolutely do the job for 10-15. Once again, Timelord was awesome

All he does is block shots, rebound, catch lobs, and pass. Tell me that isn't exactly what the Celts need from a reserve big man? The biggest thing with Williams was always two things

If you're telling me both things aren't going to be an issue, well yeah that has me rather excited. Even if it's only for short stints, the possessions he impacts on the defensive end can be what starts runs. All you have to do is throw it 15 ft in the air and it's an automatic two points. It's hard to be more impressed with what Rob has done with his limited opportunity, and it's no surprise that as he continues to play well Brad is giving him more minutes.

- Couldn't buy a bucket to save his life, but I loved Smart's 9 assists. In fact, I loved how the ball moved for everyone. We know this team is at their best when they move the ball and don't overly rely on isolation. Well how does 32 assists on 45 baskets sound? Good enough for me. Four different players with at least 4 assists, that's the type of ball movement I want to see at all times.

- Admit it, Brad Wanamaker has been solid in back to back games now. He's frustrating when things look like dogshit, but when he's solid and doesn't force things you can see why Brad gives him minutes.

- Let's be very clear about something. The defense was not very good at any point in this game. Especially that third quarter. Credit the Magic for making shots, but this was not the same caliber of defense we saw against the Raptors or even the Nets. Don't let the positivity of the win make you feel like this team showed up on both ends. Giving up 119 to a Magic team missing three starters is in fact bad. I didn't think guys like Smart or Semi lived up to their defensive reputations, and their post defense continues to get absolutely shredded. Moving forward they have to be a whole lot better, I think we can all agree there.

- The good news is his quickness and burst still look fantastic. The bad news is Kemba couldn't buy a goddamn basket in his 32 minutes. He finished 1-9 (0-5) which certainly is not what you expect from a healthy Kemba. Chalk it up to an off night since he's been so consistent in the bubble so far, but that shit can't happen too many more times. Kemba's offense is too important to no show like this in a playoff series that's for damn sure.

- It's still bothering me that half of Smart's FGA are threes. He took 10 shots last night and 5 were 3PA while taking a total of 0 FTA. I really wish he would get back to playing inside/out. When he attacks early it opens up his jumper. He's doing the reverse right now and it's no surprise he can't buy a bucket. Easiest way to get out of a slump is get to the FT line, something Smart is barely doing right now.

- 4 TOs for Jayson Tatum is too many for a guy who is going to have as high a usage rate as he does.

- It's a small thing, but can we not miss FTs late in the fourth quarter of a close game? Please? Especially when it's Kemba and Jayson taking the FTs? If this team blew this game because their best players missed FTs late in the game I would have lost my shit. I can live with poor FT shooters missing a couple, but when it's crunch time and really good FT shooters step up to the line, I need those to be automatic. Period.

- Really curious why we didn't see Romeo at all, especially on a night where the defense wasn't exactly great. I know the other wings played great, but you could have found some minutes in there for him. Semi got 12 to Romeo's 0. Why not make that 6 and 6? Aren't these the games where you see what you might have in Romeo so he's prepared in the event he's needed in the playoffs?

All in all, a win is a win even if it's an ugly win. They wrap things up with MEM/WSH and I'm not ready to look over either of those games. The Grizzlies are going to be playing for their lives and this team already lost to the Wizards this year. Stay focused, show up on the defensive end, and continue to build momentum. If the Celts play at their best I don't fear a single team in the East, and even if that's 75% of the Kool Aid talking fuck it. You win 3 in a row and I'm allowed to feel good. Sue me.